The government’s target for a substantial increase by 2025 in the share of exports in GDP has been something of a hobby-horse issue of mine.  I’m sure it was well-intentioned (the thinking behind it probably recognises that successful economies, catching up with the most highly productive countries, typically experience a more rapid increase in exports than in GDP as a whole).  It isn’t that exports are special, just that (among other things) one measure of the success of one’s firms/industries is the ability to sell more and better stuff on the (much larger) wider world market.  That, in turn, enables us to import lots (more) of stuff from the rest of the world.

In parliamentary questions earlier in the week (number 8 here), Labour’s Finance spokesperson Grant Robertson was asking the Minister of Finance about that export goal, now expressed as aiming for real exports as a share of real GDP to get to 40 per cent by 2025.   Unfortunately, the government’s record on this item is so poor that one could almost feel sorry for the Minister, except that he devised the target and has repeatedly championed it.   He has also been the man behind such questionable “export subsidies” as the amped-up assistance to the film industry, and the large scale pursuit of foreign students attracted not so much by the excellence of our institutions as by the work and potential residence opportunities dangled in front of prospective students.   Export subsidies are just a bad idea, but export targets increase the risk of being tempted by such bad policies.

Statisticians (including those at Statistics New Zealand) advise against using ratios of real variables over long periods of time.  I know why the government and MBIE do it for exports (it abstracts from the direct effects of fluctuations in export prices and in the exchange rate), but it still isn’t really kosher.   Nonetheless, that is how they’ve expressed their target.    And here is the data, all the way back to 1987, and with the target level for 2025 highlighted in orange.

In his answer in Parliament, the Minister noted that the export share had been “remarkably stable for the last 10 or 12 years”.  Actually, make that more like 16 years.

Now somewhat oddly, in his answer the Minister of Finance kept referring to the recent drop in dairy export receipts as some sort of mitigating factor.    But that has been largely a result of the drop in prices, and the main reason for using the real exports to real GDP measure in the first place was to focus on volumes and abstract from the influence of fluctuations in global prices.   The drop in dairy prices is, for these purposes, simply irrelevant.

Incidentally, within that real exports measure we can break out the data on exports of services.  Between the political rhetoric around foreign students and tourism recently one might have supposed those bits would have been doing well.  And we are often told that “weightless” services exports are part of the way of the future.  But here are real services exports as a share of real GDP. 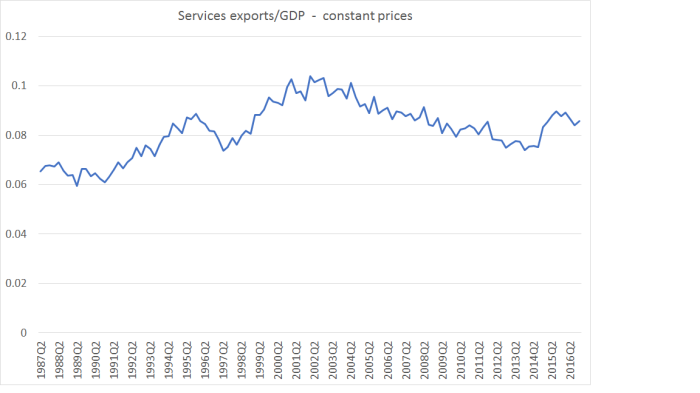 There was a bit of a pick-up a couple of years ago, but the current level is around a level first reached in 1995.

As the statisticians recommend, I prefer to look at ratios of nominal exports to nominal GDP.  There are no deflator problems, just the straight dollar value of what is exported from New Zealand and the dollar value of New Zealand’s GDP.  The trade-off is that there is bit more noise in the series.   Since neither series is mechanically controllable or even directly targetable in a market economy, I don’t think it is much of a loss.  Here is the chart of nominal exports to nominal GDP, again back to 1987. 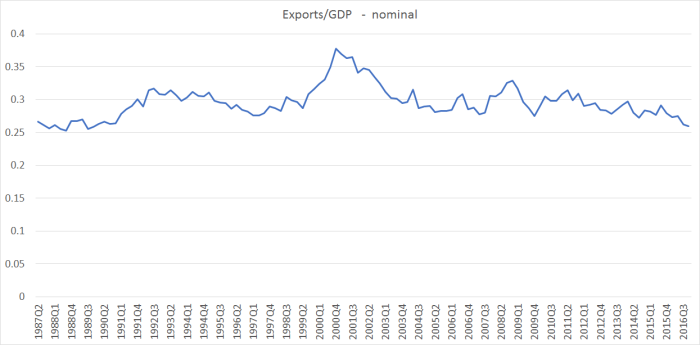 Here the fall in global dairy prices does matter, but even then not in a straightforward way. After all, all else equal, when the price of our largest export falls one might expect the exchange rate to fall.   On this measure –  the simplest measure –  exports as a share of GDP are at a level not seen since the very last quarter of the 1980s.  A generation ago.

The Minister of Finance was also at pains to point out that over the last decade or so the pace of growth in world trade has slowed, and that is true (although a significant part of that has been the rebalancing of China’s economy).    So perhaps no one would hold it against him if the progress towards his own 2025 target –  now, as he notes, only eight years away –  was lagging a bit behind expectations.  But on his preferred measure there has been no progress at all.  On the better, if a little more volatile, measure things have been going backwards.     And yet this was the government that once had the ambition of closing the income and productivity gaps to Australia.

Australia provides an interesting comparison.  Here is the constant price ratio for them (the measure our government prefers for NZ), 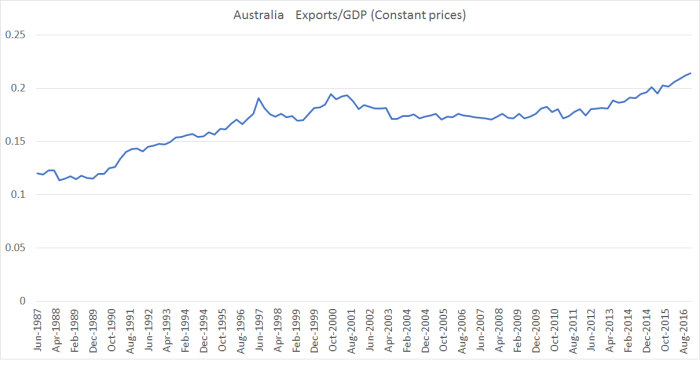 Historically, Australia had a materially lower export share of GDP than New Zealand – as one would expect in a larger country (where there is more scope for efficient profitable trade within national borders). And for a decade or so their real export share of GDP also went sideways, but for the last few years it has been rising again quite strongly.

They are also affected by changing commodity prices and exchange rates.  But here is the simple chart of nominal exports to nominal GDP. 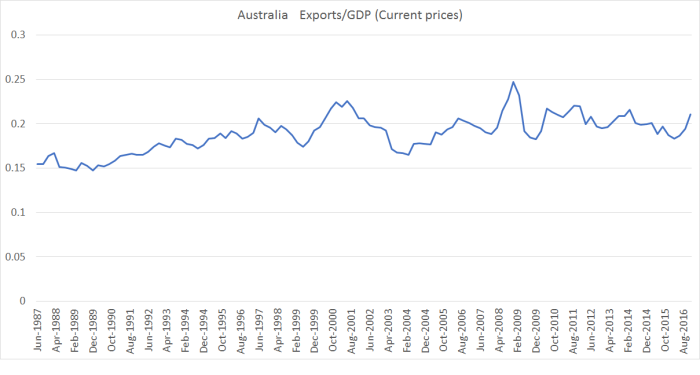 It hasn’t been rising for some time.  But whereas our export share of GDP is back at 1989 levels, in 1989 Australian exports were about 15 per cent of GDP, now they are about 20 per cent.

That is the sort of change our government needed to be seeing (roughly a one third increase in the export share of GDP) if its 2025 exports target was to be met.   It looks exceedingly implausible at present.  There was no progress under the previous government, and has been none under the current government.  That strongly suggests something wrong with the policies both governments have been pursuing.

I like to think I’m an equal opportunity sceptic.  There is a little sign of the sorts of policies from the current government that will change this picture.  But while it is fine –  and no doubt fun –  to tease the Minister about the failure of his policies, we don’t yet know what policies, if any, Labour and the Greens will advance to have the economy change course, and shift to new higher levels of international trade.  Without something that does that, our prospects for closing sustainably any of the productivity or income gaps are slender to non-existent.