Skip to content
HomeSuperior measures, but still no productivity growth

Statistics New Zealand this morning released their best estimates of New Zealand productivity growth.  They are annual only –  so the new data is for the year to March 2016 –  and cover only the “measured sector”, so excluding parts of the public sector in particular where productivity is just very hard to measure (there are few market prices for the services for a start).  They also make an adjustment for the changes in the composition of the labour force –  there is, in principle at least, a lot more human capital associated with an average worker now than decades ago when few people had a tertiary education. 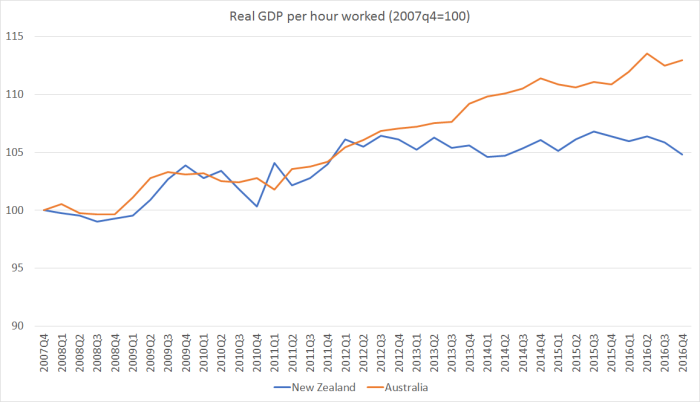 It isn’t an encouraging picture.  In fact, the last five years have been so bad, I’ve been hesitant about believing reality was quite that bad.

But here is new annual data, showing labour productivity and multi-factor productivity, both indexed to 1998 when the data in this format start.

Different models, and different measurement bases, will produce different results.  None of them suggest there has been much productivity growth in New Zealand for some considerable time.  And to repeat Paul Krugman’s succinct summary

“Productivity isn’t everything, but in the long run it is almost everything.”

26 thoughts on “Superior measures, but still no productivity growth”