Skip to content
HomeIt is quite possible to get inflation back up: Norway did

Six months or so ago I was getting a little frustrated by talk suggesting that low inflation was just one of those things. No one else, it was implied, was succeeding in meeting their inflation targets, and so we shouldn’t really be expecting the Reserve Bank of New Zealand to meet the target the Minister of Finance had set for them.

And so I wrote a short post about Norway.  It was a small advanced economy, which has had substantial issues around rising house prices and high household debt, and which had been hit by an even nastier terms of trade shock (falling oil prices) than New Zealand had faced.  Oh, and Norway has typically had lower policy interest rates than New Zealand (so perhaps less room for manoeuvre), and has a higher inflation target (2.5 per cent rather than 2 per cent).     Like New Zealand, they started raising policy rates again quite soon after the 2008/09 recession (and crisis conditions) ended, but they realized that wasn’t necessary and reversed themselves.  Unlike our Reserve Bank, they didn’t make same mistake twice.

Norway also saw its inflation rate fall away quite sharply in the aftermath of the recession.  Here is the suite of core inflation measures that the Norges Bank itself highlights –  recall that the target is 2.5 per cent inflation.

Inflation –  even core inflation – seems to be more variable in Norway than in New Zealand.  It was very low in 2011 and 2012, but has been trending back upwards for several years now.  When I wrote about Norway last in February, these core measures averaged 2.5 per cent.  Core inflation has increased further since then, now averaging 3.5 per cent (although the Norges Bank observes that they expect it to settle back nearer 2.5 per cent).

It isn’t as if Norway’s economy has been booming.  Indeed, Norway’s unemployment rate –  while still below New Zealand’s –  has risen quite markedly in the last few years.

No doubt there are lots of other detailed differences between the two countries’ experiences, but it seems to me that the biggest of them has been the New Zealand policy mistake –  promising to raise the OCR aggressively, then doing so, and only reluctantly reversing that mistake.   Here are two countries’ policy interest rates. 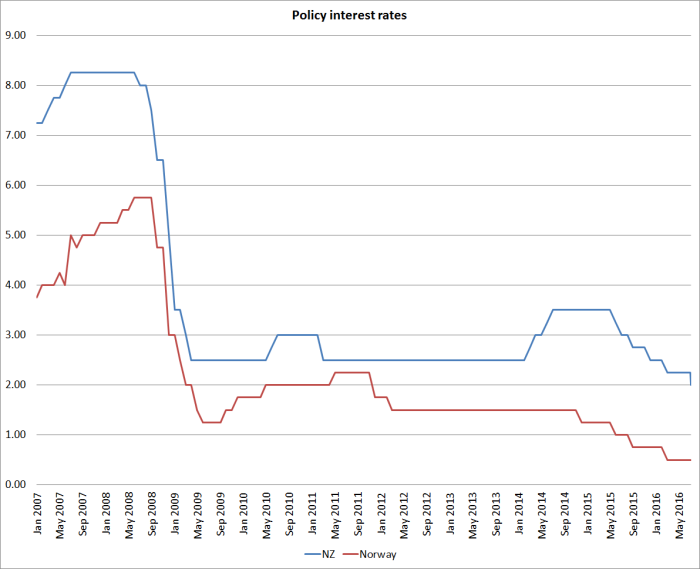 Here are the BIS index measures of the two countries’ exchange rates.

In Norway, the central bank doesn’t anguish about tradables inflation being negative for years and outside their control.  Here is the chart from a recent Norges Bank MPS that I reproduced in February.

And here are two-year ahead inflation expectations in the two countries –  the Reserve Bank survey for New Zealand, and a survey measure for Norway that I’ve taken from their MPS. 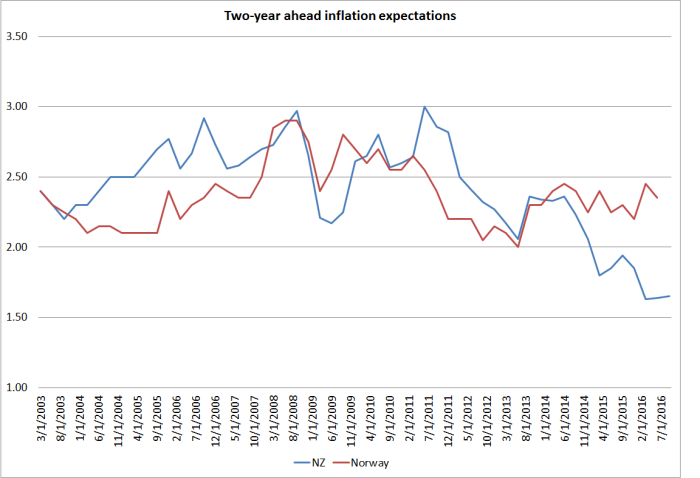 It looks a lot like a story in which

(b) leading them to raise the OCR when they should have been holding or cutting it,

(e) all while the Reserve Bank only very slowly realized its error, never explicitly acknowledged it, and only very reluctant reversed the rate hike cycle,

(f) all of which understandably dampened expectations of future inflation  quite a long way, while still suggesting to people looking at NZD assets that if there was ever yield to be found anywhere in the OECD the RB woiuld do its utmost to make sure that place was New Zealand.

As a result, the exchange rate (while quite variable) stays high, inflation stays low, and inflation expectations are at constant risk of falling further.  All because the Governor (and his advisers) got things wrong, and refuse to convincingly change tack.  As I noted yesterday –  and as several others have now pointed out –  the Governor was given an easy opportunity to affirm that he’d do whatever it takes to get inflation back to target.  For whatever reason, he simply passed up the opportunity. People, probably quite rationally, think he will in fact be very reluctant to do what is needed.

Frankly, if Norway can get inflation back to (and even beyond) target, so can we. It is mostly a matter of (a) reading inflation pressures roughly correctly, and (b) really wanting to.  The Governor –  and his advisers –  have failed on both counts.

It isn’t always true, but sadly over the last few years it wouldn’t be wildly wrong to suggest that New Zealand outcomes would have been better over the Wheeler years if the Governor and his senior team had simply taken a holiday, and done nothing at all to the OCR for four years.  We’d have avoided the badly misjudged tightening cycle, and although the OCR would still be a bit higher now –  it was 2.5 per cent when Wheeler took office –  inflation expectations would almost certainly be higher, and so real interest rates would, most likely, be no higher at all.  That would have had the incidental benefit of leaving New Zealand more headroom against the risk of hitting the near-zero lower bound at some point.

Perhaps spurred on by criticism in various quarters that the Governor doesn’t make himself available for searching interviews, he seems to have established a pattern of talking to the Herald after the release of the MPS.  The latest sets of questions and answers is here.  It is all pretty soft-soap stuff, with no follow-ups or challenges, allowing the Governor to get away without even answering the question (as here, where he –  in customary style – injects a variety of interesting but not very relevant detail, while not dealing with central issue.)

Rate cuts are supposed to bring the currency down, this didn’t. What’s happened?

Since the June statement we’ve seen the Bank of Japan ease, Bank of England ease, we’ve seen the Reserve Bank of Australia ease. If you combine that with quantitative easing that is larger than at any other time – and it was pretty large in 2009 – and with negative interest rates in countries that account for a quarter of world output, you’re just in a phenomenal situation.

There is no doubt the world is in a puzzling situation, but the Bank –  and the Governor –  are paid to do a competent job, not to end up sounding as if it is all too hard and is someone else’s fault.  I’m sure his markets staff had advised him that the probability of the exchange rate rising yesterday was quite high –  if they didn’t, they certainly weren’t doing their job.  The Governor simply made a choice –  he is a reluctant cutter, and that became clear once again yesterday.

It is a shame that the Herald, given the privileged access, didn’t ask a few more questions such as:

18 thoughts on “It is quite possible to get inflation back up: Norway did”