Playing around in the consumption data yesterday prompted me to have a look at what had been happening with government consumption spending.  Government consumption, in the national accounts, isn’t the same as total government operating spending.  The latter includes transfers –  the huge amounts modern governments spend on direct payments to households, through the welfare and social insurance systems etc.  Government consumption parallels private consumption –  it is the stuff governments and their agencies (central and local) purchase directly (excluding capital spending, which is investment).    That includes stuff directly consumed by households but paid for by governments –  think of lots of health and education spending –  as well as stuff “consumed” collectively, or in some sense by governments themselves.  The cost of The Treasury, MFAT, the courts, or defence spending are examples of the latter.

Take total government consumption spending first.  The OECD has data for all its member countries since 1995, so I’ve focused on that period.  Here is how New Zealand and Australia have done relative to the median OECD country over that period. 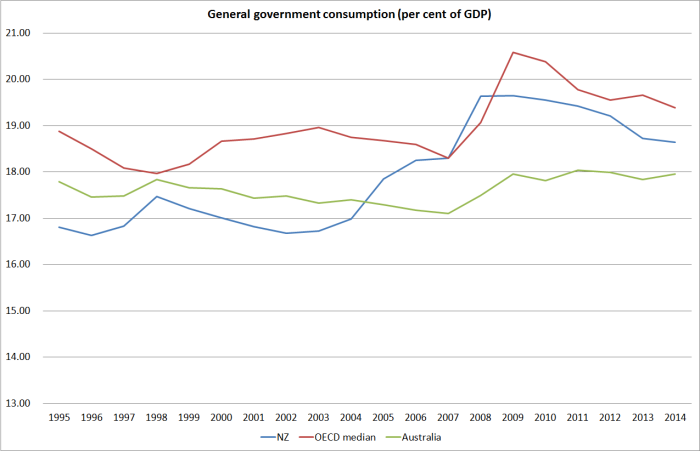 And here is the chart for all OECD countries, showing both the 2014 numbers and the average for the full period 1995 to 2014.

As I noted earlier, total government consumption spending includes stuff individual households consume directly but the government pays for, as well as the more traditional stuff of government (policy advice, defence, law and order etc).  The latter is known by the national accountants as “collective consumption”.  Here are the same two charts as above, but this time just for collective consumption. 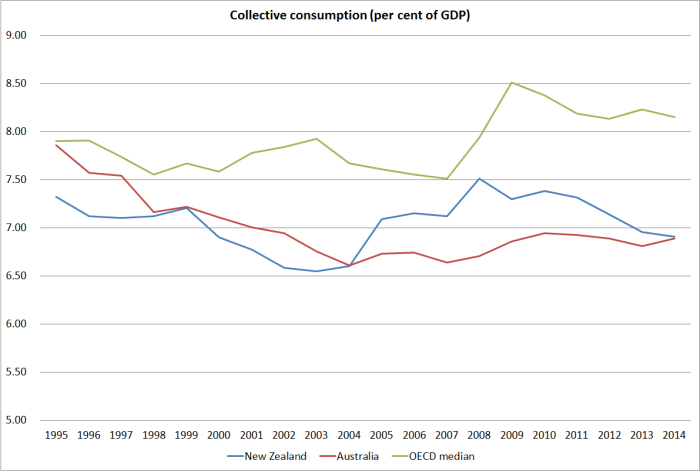 Trends here look quite a lot more favourable for New Zealand (and Australia even more so).  No doubt it helps how little we spend on defence, but I think it is generally accepted that – even if there are whole agencies that could be closed with no real loss – that the New Zealand core public sector is fairly lean.

And the OECD as a whole. 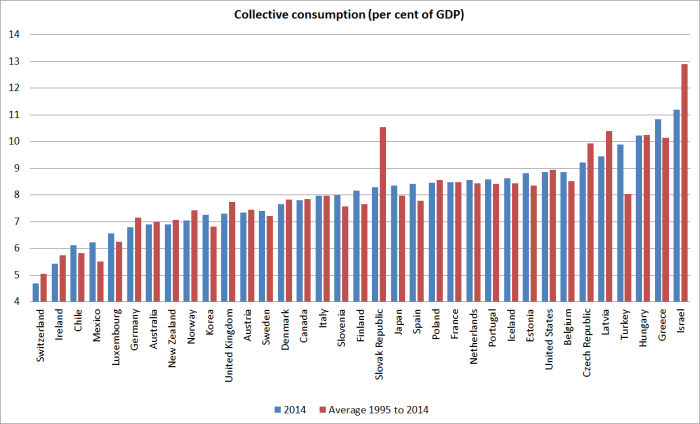 Note that the countries at the right of this chart are quite different from those at the right of the total government consumption chart above.  The Nordic countries are actually towards the left of the chart –  Sweden, Denmark and Norway don’t spend much more running their governments than we or Australia do.  The big differences are in the individual consumption the government pays for   – be it childcare, health or education.  The countries to the right of this chart look a lot more like those which tend to spend a lot on defence –  those that really need to (Israel, and increasingly perhaps the Baltics,  as well as Greece and Turkey with their historic rivalries and suspicions).   It is interesting then how far to the left Korea is –  perhaps offset in part by US defence spending and security pledges?

Reasonable people can differ on the appropriate role for government in income support, or provision of health and education, but this is collective consumption.  I’d be keen to learn a little more about how Switzerland manages to run such a successful and well-functioning country with collective consumption of only around 5 per cent of GDP.