I ran a couple of cartoons from my 1980s and 90s collection a couple of weeks ago.  Many of the ones in my folder were about monetary policy –  the hugely controversial disinflation process we were engaged in, trying to get inflation down to 0 to 2 per cent per annum, and then keep it there.  No one much believed we would manage it (or even be allowed to do so by the political process)  –  there were even cartoons along the lines of “pigs might fly”.  This was one from my collection. 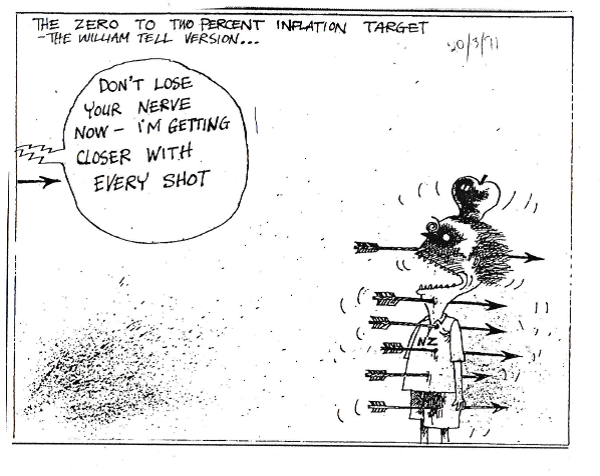 These days the challenge is the other way round –  getting inflation back up to (a now higher) target.

This chart shows inflation over Graeme Wheeler’s term as Governor. It has never got nearer the 2 per cent target midpoint that he and the Minister explicitly inserted into the PTA in 2012.  Most of the time, the annual inflation rate has been below the 1 per cent lower bound of the target range.

And so the cartoon struck me as apposite on the eve of the next MPS.  At almost every single OCR review and MPS the Governor has assured us that inflation will soon be getting back to around 2 per cent. Each time, so far at least, he has been wrong.  Forecasts have been revised down repeatedly, and with them the OCR.

Of course, if you look carefully, that cartoon was dated March 1991. By the end of that year, inflation was finally inside the target range.  Indeed, most studies looking at New Zealand’s experience of low inflation start from around then.

Perhaps we will be surprised, and after all the surprises and failures  so far inflation really will be back to around 2 per cent before too long.    The right monetary policy judgements are a part of making that prospect real.