Skip to content
HomeSkills matter….and we already seem to have them

Earlier this week the OECD released Skills Matter, a 160 page report on the results of a programme of surveys of adult skills in OECD (and a handful of other) countries.  As usual with OECD reports, it is full of fascinating charts.  Here is how they describe the programme:

In the wake of the technological revolution that began in the last decades of the 20th century, labour market demand for information-processing and other high-level cognitive and interpersonal skills is growing substantially. The Survey of Adult Skills, a product of the OECD Programme for the International Assessment of Adult Competencies (PIAAC), was designed to provide insights into the availability of some of these key skills in society and how they are used at work and at home. The first survey of its kind, it directly measures proficiency in several information-processing skills – namely literacy, numeracy and problem solving in technology-rich environments.

It is worth emphasizing that the survey involves attempting to directly assess skill levels, not formal qualifications.

The first such survey was done a few years ago, but this is the first round to include all OECD countries and, in particular, the first to include New Zealand.   They even provide a 20 page country note on New Zealand.

The bottom line for New Zealand?  The news is good.

Here is how our adults scored on literacy. 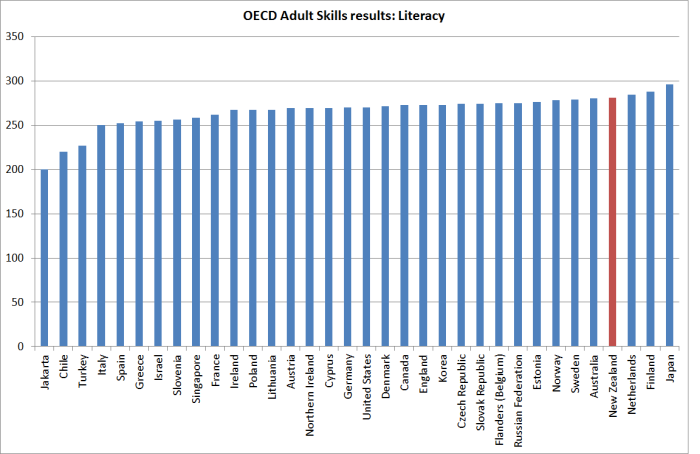 And on “Problem-solving in technology-rich environments”

Looking across the three measures, by my reckoning only Finland, Japan, and perhaps Sweden do better than New Zealand.    Perhaps there is something very wrong with the way the survey is done, and it is badly mis-measuring things, but those aren’t usually the OECD’s vices.  For the time being, I think we can take it as reasonably solid data.  And the broad sweep of the cross-country results makes some sort of rough sense: typically the poorer countries are to the left of the charts (relatively less highly-skilled).

But if the skill levels of our adults are so high, on average, by international standards (and, as it happens,  we have quite a high rate of tertiary qualifications as well), it should perhaps raise questions again about the size and nature of our immigration programme.

After all, as I noted, the poorer and lower productivity countries are generally to the left of these charts. But New Zealand is one of the less well-performing OECD countries on that score.  Here is real GDP per hour worked for OECD countries in 2014.

And when the OECD lines up the skills scores against the productivity data one of the largest gaps (lagging productivity) is for New Zealand   The cross-country scatter plots don’t show a tight relationship by any means, but they do tend to suggest that the skills and talents of our people aren’t what holds New Zealand back.

And yet we aim to grant 45000 to 50000 new residence approvals each year (a scale three times the size of US and UK programmes, per capita), supposedly with a focus on skilled migrants.  What is the logic?  And where is the evidence that this is the right place to focus in tackling New Zealand’s long-term economic underperformance?  Reinforcing those doubts, we know that other data show the incremental returns to tertiary education –  a different thing from skills, but one hopes not wholly unrelated –  are also among the lowest in the OECD.

A reasonable person might instead look at the data and suspect that, for whatever reason, the economic opportunities in New Zealand just aren’t that good.  Perhaps that is about location and distance, and a seeming inability to break out of a dependence on (a fixed supply of) natural resources or to increase productivity in those natural resource sectors rapidly enough.  But whatever the underlying reason, the opportunities haven’t been found here –  our export share of GDP has been static for decades, per capita tradables sector production hasn’t changed for 15 years, and a huge number of New Zealanders have kept on leaving for better opportunities abroad (mostly in –  on these measures –  slightly less skilled Australia).

One might have severe doubts about the logic of using policy to actively pursue bringing in lots more people  –  it might be no more sensible here than it would be in Wales, or Scotland, or Nebraska, or Newfoundland, or Tasmania (who’ve been spared the depradations of Think Big bureaucrats and politicians with immigration as a lever).  Perhaps it would be a little less worrying if the new arrivals were typically very highly-skilled people –  but recall that the highly-skilled people we already have aren’t succeeding in generating high returns (high productivity) here now.

But in fact, our immigrants aren’t that highly-skilled at all.  At the frivolous end of the spectrum, we were giving a small number of Essential Skills work visas to shelf stackers and kitchen hands.  More seriously, among those gaining residence visas in the skilled migrant category, the top four occupations in the last year for which we have official data were

But it isn’t just a matter of occupational lists.

As it happens, the OECD report looks directly at the skills level of immigrant populations.  There are a few countries where immigrant population skill level match those of native born populations.  Perhaps that isn’t too surprising where most migrants come from countries with very similar cultural or linguistic backgrounds.  Among subsets of migrants, one could think of the flow among NZ/Australia/Ireland/UK, or between Chile and Argentina, or between the Czech Republic and Slovakia.  At the other extreme, some countries now face the challenges of very large skills gaps between migrants and native-born (most of the Nordic countries are now in this situation).  New Zealand doesn’t do too badly on this count – after all, we have control on who comes in, we have a notional skills focus, and the UK remains the largest single source of residence approvals. But there is a clear skills gap between immigrants and native-born New Zealanders.  Importing people doesn’t look as though it has been a means of raising skill levels here, or in most other countries.  In general that shouldn’t be surprising –  successful countries solve their own problems, and when they succeed they might share their bounty with newcomers. But a different sort of people is very rarely the answer to serious economic challenges.

On paper, there is some evidence suggesting that migrants to New Zealand have higher formal qualifications than the average New Zealander.  Nonetheless, as Julie Fry reported in her Treasury working paper a couple of years ago

Evidence suggests that immigrants are, on average, more qualified than the
New Zealand-born.  However, they also face language and adjustment barriers, at times including discrimination, which on average take 10-20 years to overcome.  In common with overseas patterns, recent New Zealand immigrants have poorer outcomes than others in the labour market, although those outcomes improve over time.   Immigrants who are from culturally similar source countries (such as Australia and the United Kingdom) adjust more quickly.   On average, migrants from Asia take longer to adjust, and migrants from the Pacific Islands never reach parity with the New Zealand-born, reflecting the fact that they enter mainly on family reunification grounds and non-skills-based quotas.

Our immigration policy seems seriously misguided.  It has been sold as a “critical economic enabler“, but if anything looks more as though it might be serving as a disabling factor.  There is no evidence that we are short of people, or of skills.  Skill levels  –  individually and collectively –  could no doubt always be higher than they are.  But immigration policy hasn’t been, and isn’t, raising skill levels in New Zealand –  nor is it doing so anywhere else in the OECD.
(And to anyone who wants to run an individual sector skills shortages argument, I commend to them the post I wrote on that topic a couple of weeks ago.)

26 thoughts on “Skills matter….and we already seem to have them”