House prices are not the responsibility of the Reserve Bank, any more than tomato prices are.

In its monetary policy, the Bank was charged by Parliament with maintaining a stable general level of prices.  In the Policy Targets Agreement, the Governor and the Minister of Finance agreed that, while the Bank should keep an eye on all sorts of price measures, for practical purposes the focus should be on keeping annual CPI inflation near 2 per cent.  The CPI includes rental costs and the cost of construction of new dwellings, but it does not include section prices or the prices of existing dwellings.  Parliament or the Minister could require the Bank to focus on some different index altogether –  there is nothing sacrosanct about the CPI, even as a measure of prices –  but they haven’t.  And the way the CPI treats housing is consistent with the Reserve Bank’s view as to how housing should be treated.

What about the financial regulatory side of the Bank’s responsibilities?  The Reserve Bank Act requires that the Bank exercise its regulatory powers over banks in ways that promote the soundness and efficiency of the financial system.  What matters is the overall health of the balance sheets of the financial system as a whole.  Loans secured on residential properties make up a fairly large proportion of bank balance sheets, which suggests that the Reserve Bank might reasonably want to understand the risks banks are carrying, and the buffers they have in place if things turn out less well than expected.  But it does not make house prices a policy responsibility of the Reserve Bank.

Perhaps one might make an exception to the statement if there were evidence that house prices increases were occurring primarily because of reckless lending by banks.  But even that is a higher standard than it might sound.  It doesn’t just mean that credit growth for housing might be running ahead of incomes –  one would expect that if other shocks and distortions (eg land supply or immigration) were putting upward pressure on house prices. If so, the younger generation will typically need to borrow more from older generations to get into a house, and the banks may be just the intermediaries in that process.  And even if the Reserve Bank suspected “recklessness” it would have to ask itself why, and what basis, its judgements were likely to be better than those of the banks.  After all, the Reserve Bank has nothing at stake, while the shareholders of banks have a great deal at stake (even if you think that governments would mostly bail-out creditors, shareholders usually lose a lot when things go wrong).

One might draw on past experience and international research.  But even then one has to do so carefully.  After all, as the Reserve Bank itself has highlighted, losses on residential mortgage portfolios have rarely played a central role in systemic financial crises –  and particularly not in countries with floating exchange rates (check) and with little or no direct government involvement in housing finance (check).  Very rapid housing turnover can be a sign of things going haywire –  although even then not necessarily of high risk to banks.  But in New Zealand, house sales per capita have remained well below what we saw in the previous boom, and mortgage approvals per capita also remain pretty subdued by pre 2008 levels.  And recall that in New Zealand, with the same banks we have now and the same incentives, the banking system did not get into trouble even after that boom.  During the 2008/09 recession, senior Reserve Bank and Treasury officials toured the world spreading reassuring words, and they were right to do so.

Perhaps too, the Bank might worry about the spillover from higher house prices into the rest of domestic demand.  But, in fact, over the last 25 years, despite huge increases in real house prices, the private consumption share of GDP has been essentially constant. 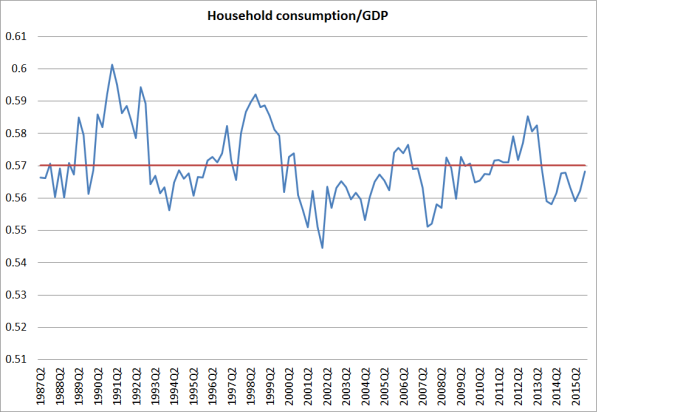 That is largely what we should expect: after all, higher house prices don’t make New Zealand any better off, and the individuals who are better off must be offset by other individuals who are made worse off.  The Bank might also pay attention to high-level research suggesting that financial crises have typically been foreshadowed by big increases in debt to GDP ratios over relatively short periods (the few years just prior to the crisis).    But on that score, it is worth remembering that most countries that have had big increases in debt to GDP ratios have not had domestic financial crises (think of the UK, Canada, Australia and New Zealand for example).  And in New Zealand, household debt to GDP ratios have gone largely nowhere for eight years, after a huge increase in the previous 15 years.  Yes, there has been quite an increase in the last couple of years, but that is surely what one would expect when population pressures and land supply restrictions combine to push house prices up.  A higher level of credit is a typical endogenous response.    It is not, of itself, a danger signal regarding the soundness of the financial system.

This was all prompted by a piece I noticed on interest.co.nz which appeared under the heading “RBNZ has nowhere to hide from the housing market”, with the fuller heading  “Each new piece of housing-related data coming out at the moment is increasing the pressure on our central bank”.   If so, it is only because the Reserve Bank has chosen, with no good statutory justification, to put that pressure on itself.  Good central banks don’t need to “hide”.  The housing market is just another, albeit important, market.

The Reserve Bank has a relatively straightforward job. It is supposed to keep inflation near 2 per cent, which it has been failing to do.  And it is supposed to use its regulatory powers to promote the soundness and efficiency of the financial system.  There is no sign that the soundness of the system is threatened, and each new regulatory intervention impairs the efficiency of the financial system –  and provides, briefly, cheaper entry levels for those upon whom the Reserve Bank’s favour rests.

Here’s what I would expect the Reserve Bank to be doing.  They should be continually reviewing the reasonableness of the risk weights that they allow the banks to use in their capital modelling, and ensuring that they understand how different banks are assessing the same risk.  They should carry on with their programme of stress tests, which so far have shown very encouraging results in the face of very severe shock scenarios.  And then they should be leaving the responsibility for house prices and a dysfunctional housing supply market where it rightly belongs: with central and local government.  When the Reserve Bank intervenes not only does it compromise financial system efficiency, for little obvious gain on soundness, but it leaves observers with a sense that perhaps the real issues are different from what they are.  And it encourages banks to focus on managing regulatory limits rather than thinking hard about the risks they, and their shareholders, are taking on.

The Reserve Bank is not responsible for the current housing mess, and it cannot provide the solution –  not even partial or temporary solutions.  Responsibility rests with successive governments that bring in tens of thousands of non-New Zealanders each year into a system that is simply unable to generate effectively and cheaply a sufficient supply of houses.  And that isn’t a market failure, but yet another example of government failure.

And for those who worry that a lower OCR would simply push up house prices further, a reminder that one of the key ways in which monetary policy works is by raising the prices of long-lived assets – which encourages people to invest in producing more of them.  But perhaps too it is worth remembering that the real OCR has fallen by more than 600 basis points since 2008, and yet material real house price increases have only been seen in places with that fatal combination of substantial population pressures and a highly distorted land supply market.  Interest rates are low for a reason –  the economy would be even weaker and inflation lower if they were not.