I’ve shown charts highlighting how weak our per capita income growth has been, and how the volume of business investment per capita has only just got back to near pre-recessionary levels.

Real per capita exports in the September 2015 quarter were 8.5 per cent higher than they had been in December 2007, just prior to the recession.  In some ways, that doesn’t seem too bad –  plenty of components of GDP have been weaker.

But here are real per capita exports for both New Zealand and Australia since the start of 1991.  The starting point is determined simply by when the SNZ quarterly population series for New Zealand begins.

The trend line shows the trend in New Zealand per capita exports from the start of the series to the end of 2003.  There is a visible fall in the trend rate of growth of exports after that point, but it also coincides with the sharp rise in New Zealand’s real exchange rate which has not been sustainably reversed since then.

What about the comparison to Australia?  Australia achieved faster growth in real per capita exports in the first decade (around 1 per cent per annum faster).    Australia’s real exports per capita then went sideways for a number of years (and more or less moved parallel to ours over perhaps 2002 to 2012) before once again growing materially faster than New Zealand’s exports over the last few years.  Over the whole period since 1991, Australia’s exports per capita have risen 21.8 per cent faster than New Zealand’s.

One story sometimes told is that if the terms of trade rises then a country doesn’t need to export as much (by volume) –  if prices do the work, real resources can be used for other purposes (economic life is about consumption, not exports –  which are just a means to an end).  A higher exchange rate, on the back of the stronger terms of trade, redistributes resources away from the export sector. 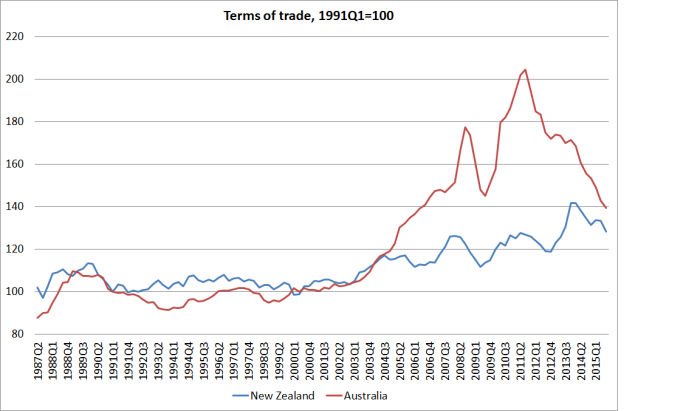 Of course, Australia is still in the midst of an adjustment:  exports are growing quite strongly on the back of the huge investment boom in the resources sector.   But, on the other hand, the global prices of the commodities Australia exports are still falling, taking the terms of trade with it.  If the terms of trade continue to fall much further, and stay low, some (much?) of that Australian investment might yet be regretted by the firms that undertook it –  and might not, with hindsight, have helped Australia much.   Only time will tell.

But lest anyone think Australia’s strong export performance is just about the resources sector, I found the chart comparing services exports in the two countries sobering (this reverts to nominal ratios to GDP because I couldn’t quickly find volume data for Australian services exports).  New Zealand –  the smaller country –  still has a higher foreign trade share of GDP.  But despite the way the terms of trade boosted the exchange rates in both countries (making for tough conditions for exporters of non commodity goods and services), services exports in Australia are now around the historic peak.  But in New Zealand –  despite the impressive surge in the last few quarters – services exports as a share of GDP are now barely 80 per cent of the previous peak. 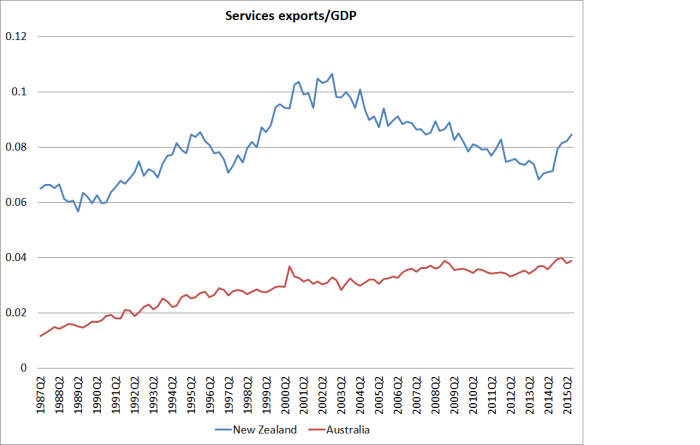 Not a particularly cheery note for the approaching Christmas season, but then in the church’s year it is still Advent, a solemn season of reflection, preparation, and self-examination.  So perhaps not so inappropriate after all.

5 thoughts on “Exports: some trans-Tasman comparisons”