Understandably, there is a lot of focus on what the quarterly data might, or might not, mean for monetary policy.  I’d have thought the answer was not much –  the September quarter was a bit stronger than many had expected, and only time will tell whether that is more than a one-off, or whether (as I suspect is more likely) the economy will settle back to something more like the very weak growth (per capita) recorded in the first half of the year.

What about a slightly longer-term perspective?  Here is annual growth in real per capita GDP, for as long as Stats NZ has the quarterly data for.  I’ve used a series that averages the expenditure and production measures.

Look how weak the recoveries since 2009 have been.  Peak growth was back in 2011, just after the double-dip recession.  Despite the record terms of trade, real per capita GDP growth got only briefly above 2 per cent at the end of last year –  even then only just reaching the average growth rate for the 17 years up to 2008.  For the year to September, per capita growth has fallen back to the average seen after 2008 –  and it would take another quarter at least as strong as September to stop that growth rate dropping even further in December.   (And as many commentators have highlighted, the more variable income measures have been falling in per capita terms, as real growth has slowed and the terms of trade have fallen.)

The second chart is similar to one I ran a few weeks ago.  It just puts a trend line through per capita real GDP for 1991 to 2008, and then compares how actual real per capita GDP has compared with that 1991-2008 trend.  The gap now is something like 15 per cent.

Reasonable people might differ on where trend lines should be drawn – here I simply started at the start of the series, and choose the end of 2008 as the end since most people would reckon the output gap had closed by then.  But using almost any trend measure, the economic performance has been pretty disappointing.  Of course, it has been disappointing in most countries, but we’ve had the benefit of a record terms of trade and didn’t face the costs/distortions of a serious domestic financial crisis.

One of the striking aspects of the recent quarterly data has been the increase in the volume of services exports –  up by more than 20 per cent since the start of last year.  This seems to reflect both an increase in tourism volumes and in the number of foreign students.  Any exports increase resource pressures right now, and in an underemployed economy should generally be welcomed.  Nonetheless, it is worth keeping a longer-term perspective in mind. 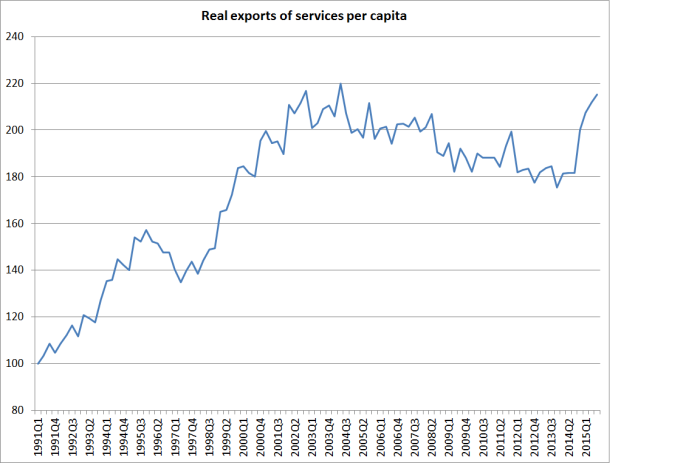 Even after the dramatic increases of the last few quarters, real exports of services per capita have not even quite got back to the peaks reached more than ten years ago.

And one wonders just how much more good quality growth we can expect in this sector.   International guest nights data seem to have been going more or less sideways over the last few months, and it is difficult not to think that much of the growth in education exports (almost all at the bottom end of the market –  polytechs and PTEs) is resulting from the “export incentive” of the right to work in New Zealand and the desire to secure a residence visa –  the total number of which is more or less capped.

Browsing on some blogs this morning, I stumbled on a nice brief article by Kevin O’Rourke, an Irish economic historian and professor at Oxford, about the role emigration from Europe in the 19th century may have played in enabling European populations to capture the benefits of the Industrial Revolution, and overcome the Malthusian limits, sooner than they might otherwise have done.

The article is worth reading, but my eye lighted on a single paragraph that summarized some results that I’d been meaning to write about for some time:

…emigration proved an invaluable safety valve. It was highest where wages were lowest relative to the New World, and where population growth was fastest, although poverty traps at ﬁrst impeded migration from the poorest regions of Southern and Eastern Europe. And the beneﬁcial effects on European labour markets and living standards were often very large. According to one estimate, between 1870 and 1910 emigration lowered the Swedish labour force by 20 per cent, and increased real wages by 7.5 per cent; the equivalent ﬁgures were 24 per cent and 10 per cent for Norway, 39 per cent and 28 per cent for Italy, and no less than 45 per cent and 32 per cent for Ireland.

These estimates aren’t by just anyone. They are the results of work done by  two leading academics, Alan Taylor and Jeffrey Williamson, both of whom have spent decades looking at these and related issues.

In other words, emigration from (in these cases) Sweden, Norway, Italy and Ireland left the people who stayed behind better off –  it contributed, in the jargon, to a process of factor price equalization, tending to narrow the gaps between wages in emerging Europe and places like the United States, Australia or New Zealand.  Looked at through the perspective of history, it should not be a remotely surprising result to anyone.  Wage differentials between New Zealand and the United Kingdom, for example, are estimated to have converged in the run-up to World War One, in response to the very large inward migration here.

But for some reason people get hesitant about applying the same logic to New Zealand’s experience over the last 40 years or so.  Over that period, a large gap has opened up between wages and material living standards between New Zealand and the rest of the advanced world.  But the gap has been particularly obvious in respect of Australia –  obvious both because the two countries had had fairly similar incomes throughout their modern history, and because of the relatively free labour mobility between the two countries.

The cumulative net outflow of New Zealand citizens since 1960 is estimated to have exceeded 900000 people. 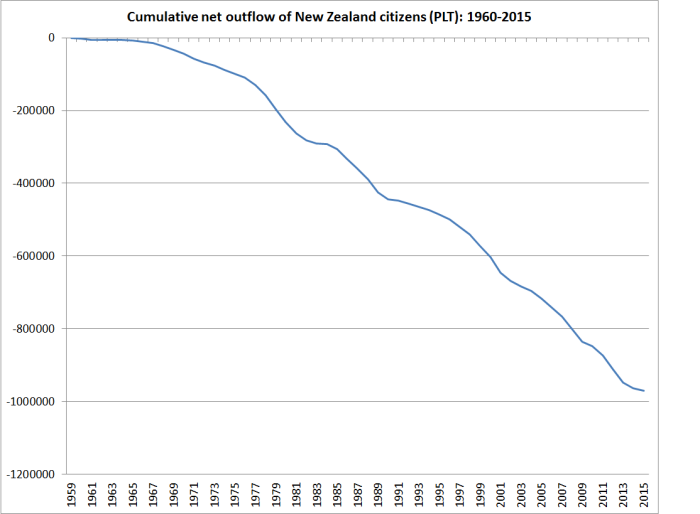 If the average population over that period was around 3.5 million, the outflow is roughly equal to a quarter of our population –  so it has been on a scale similar to the countries in the extract above.  All else equal, we might have expected quite a degree of factor price equalization to have occurred as a result, just as those European countries experienced in the 19th century.    One wouldn’t have expected the process to be complete by any means –  after all, incomes in (former ) East Germany are still below those in the West, and not everyone has left the East.  But if economies were left to work normally, we’d have expected quite a lot of convergence.

But what really marked modern New Zealand out from 19th century Italy, Ireland, Sweden or Norway was immigration policy.   As returns abroad improved relative to those at home, authorities in none of those four countries/regions (Ireland was still part of the United Kingdom) had an active policy to bring in even more migrants from elsewhere than were leaving.

For many, the emigration must have been heart-rending –  breaking up families and depleting villages and regions.  But it was a process of responding to changing opportunities that, on average, improved living standards for those who went to the New World and those who stayed behind.  But the governments weren’t activist enough, or foolish enough, to prevent the adjustment working, or try to reverse it as a matter of policy.  You can’t expect to see factor price equalization occurring, working in ways that help the poorer country/region, when (net) there isn’t an outflow of factors from the poorer region.    If only New Zealand policymakers would recognize this rather basic, historically well-documented, point.