At 6 per cent, our unemployment rate is no longer low.  And yet it seems to excite little interest, whether from  the media, economic commentators, the Reserve Bank, or the government.

I’ve argued that the Reserve Bank’s unnecessarily tight monetary policy over recent years (as revealed by core inflation outcomes) has contributed to the high unemployment rate.  Within a standard model, this shouldn’t be a remotely controversial claim. If, as the Bank reckons, inflation expectations are in line with the target, then actual core inflation outcomes persistently below target will have reflected less utilisation of productive capacity (labour and perhaps capital) than would have been possible.  Put that way, it sounds bloodless and technocratic, but real people are affected here –  people unable to get a job at all, or to get as many hours as they would like.  Lower policy interest rates would have stimulated some more domestic demand, and would have lowered the exchange rate, stimulating some more external demand.  And core inflation would have come out nearer the target.

I’m not going to repeat the debate as to whether, with the information they had at the time, the Reserve Bank could reasonably have run a different stance.  I think so, and said so in writing within the Bank at the time.  But the point here simply is that, at least with hindsight, monetary policy was persistently too tight, and there has been an output and unemployment cost to that –  in a recovery that was, in any case, probably the most anaemic New Zealand has had for a very long time.  And the cost goes on –  even now, the unemployment rate is rising, not falling.

But how do we compare?  I downloaded the OECD data on unemployment rates for the 19 OECD monetary zones (ie 18 countries with their own monetary policy, plus the euro area).

Despite having some of the more flexible labour market institutions among advanced countries, New Zealand’s unemployment rate, at 6 per cent, is currently a bit above the 5.5 per cent median for this group of countries.

And over the last year, only four of these countries have had an increase in their unemployment rate at all.  New Zealand’s increase  has been second only to that in Norway.  The last year has been tough for Norway, with the collapse in oil prices.  The central bank has cut interest rates, by 75 basis points. But they are somewhat constrained.  The inflation target in Norway is 2.5 per cent, and core inflation is at least that high.  The central bank lists four core inflation measures on its website: one is at 2.4 per cent, one at 2.5 per cent, and the others at 2.8 per cent and 3.1 per cent.  Each of those measures is higher than they were a year ago.  Without looking into Norway in more depth, the rise in the unemployment rate (which is still only 4.5 per cent) doesn’t look like something that monetary policy can usefully do much about.  New Zealand is different. 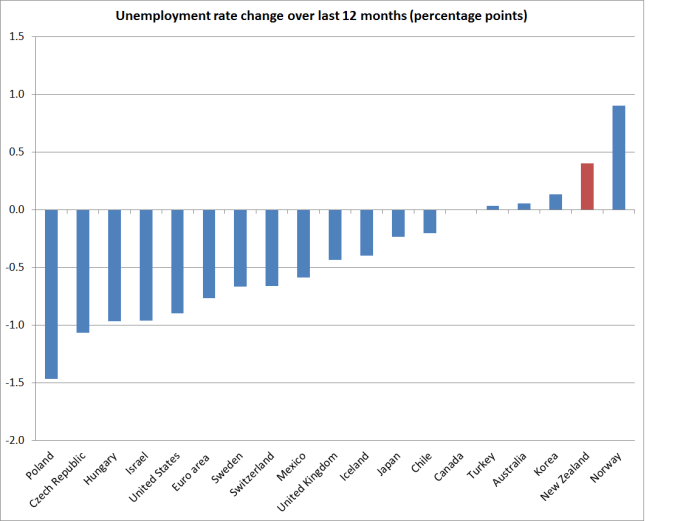 New Zealand also shows up at less attractive ends of the charts if we look at how the unemployment rate has changed since either the peak reached in the recessions from 2008 on, or from the trough in the boom years.  On the latter measure, the only area that has seen more of an increase in the unemployment rate is the euro area as a whole (which has pretty much exhausted the limits of conventional monetary policy).  And it is not as if our boom was extraordinarily large –  using OECD estimates, our peak output gap in the boom years (3.2 per cent) was bang on the median for this group of countries. 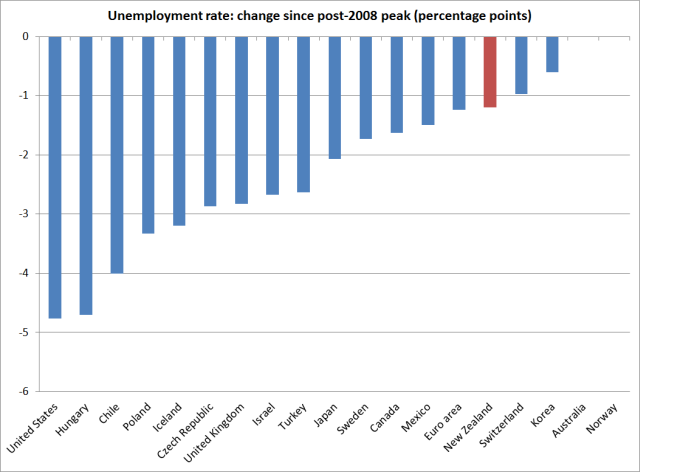 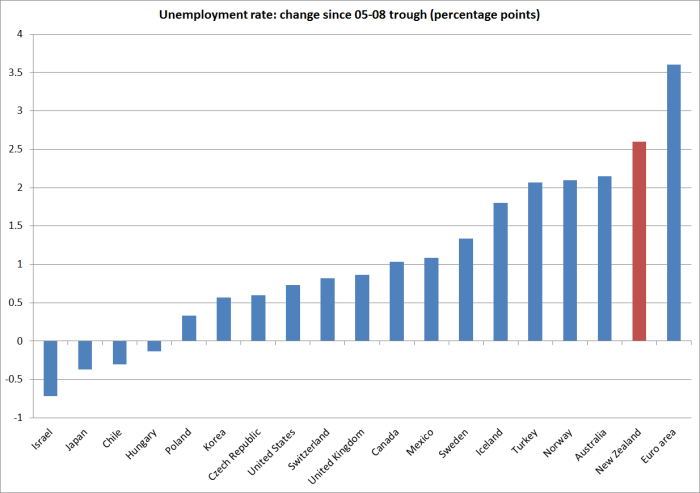 So New Zealand’s outcomes look pretty bad.  Relatively high unemployment now in cross-country comparisons, rising unemployment, and by some margin that largest increase in the unemployment rate since the boom years of any country that still has conventional monetary policy capacity left.  It should be a fairly damning indictment.

Of course, Australia also shows up towards the upper end of each of these charts.  Each of the RBA’s core inflation measures is now below their target, although (a) by less than core inflation is below target in New Zealand, and (b) this gap between outcomes and target has only really emerged in the last few quarters.  By contrast, core inflation in New Zealand has been clearly below the target midpoint for more than five years.   I suspect the Reserve Bank of Australia should also be cutting their policy rate further, but at present any error there looks less egregious than the error in New Zealand.

(Defenders of the Reserve Bank could, of course, reasonably point out that the Bank has cut by 100 basis points this year, and that monetary policy works with a lag.  However, since the Bank forecast yesterday that the unemployment rate will still be 6 per cent in March 2017, and inflation then is forecast to be only 1.5 per cent –  even with a material acceleration of growth –  that point is not particularly telling on this occasion.  It simply means that this year’s cuts have stopped the situation getting even worse.)

I’m not entirely sure why the unemployment outcomes seem to be getting no traction in the New Zealand debate.  Perhaps there is something in the insider/outsider story –  neither the bureaucrats making policy nor the market economists commenting on it are unemployed.  And perhaps many of them are, like me, of an age that the 11 per cent unemployment rates in the early 1990s shaped their perspective?  And having spent much of his career abroad, mixing mostly with international agency elites, the Governor may also have a rather limited degree of identification with the New Zealanders at the bottom end who are paying the unemployment price. But none of this seems particularly compelling.

As is widely recognised, the main Opposition political party has been failing, and isn’t helped by having a finance spokesperson who seems to struggle to get to grips with the issues, and to communicate them in a way that either resonates outside central Wellington, or in the House.  And yet, the unemployment rate would seem to be a natural issue for the Labour Party, with its strong union base, and voter base among the relatively less well-off sections of the community.

I suspect the Minister of Finance isn’t very happy with the Bank’s handling of things –  he has hinted as much in several public comments earlier in the year.  But what is in for him to make more of the Reserve Bank’s failing?  The government’s popularity ratings remain high, and the media and business elite continue to retail a narrative in which New Zealand’s economy is doing just fine –  despite near-zero per capita GDP growth, almost non-existent productivity growth (and high unemployment).

Which leaves me wondering whether elite opinion support for large scale immigration –  repeated yesterday by the Reserve Bank Governor –  is part of the story.  The Reserve Bank reckons that the high rate of immigration has raised the unemployment rate and lowered wage inflation –  it is there in the text of the MPS yesterday.  I reckon they are wrong on that: the demand effects of immigration surprises have almost always outweighed the supply effects, and so surprisingly high immigration has, if anything, tended to hold the unemployment rate down in the short-term (in the long-term it is the labour market institutions that determine it).  If you really strongly believe in the benefits of high rates of immigration to New Zealand –  and that has been the elite view, against the evidence of a steady trend decline in New Zealand, for a century or more – but think it is raising the unemployment rate in the short-term, then you might be reluctant to express any serious unease about the high and rising unemployment rate, lest it cast doubt on your preferred immigration policy.  If there is anything to that interpretation, I’m sure it is subconscious rather than conscious.  And I’m not sure if it explains anything either.

This is one of those times when central bank independence is not really serving the interests of New Zealanders.  The logic of the argument was that independent central banks would protect us from high inflation. Now it is working the other way round.   If the Minister of Finance were making the OCR decisions, the political pressure to do something about rising unemployment –  at a time of very low inflation –  would probably be more focused and intense.  The Minister of Finance has to face questions in the House every day, and make himself regularly available to the media and voters.  By contrast, the Governor hides away behind a cloak of technocratic expertise, and a Board which sees its role as to protect and promote the Bank.  That means no effective accountability (remember, real accountability means real consequences for real people).