I’ve been banging on about the decline in inflation expectations, and the apparent indifference of the Reserve Bank to that, for most of this year.

It was different late last year.  Then, the Bank was making the case –  at least after the event –  for easing monetary policy fairly aggressively with one of the considerations being avoiding the risk of inflation expectations settling lower than was really consistent with the target.  Then –  last year –  the Governor went so far as to suggest that he would prefer to be in a situation where hindsight proved that they had overdone things a little, with expectations rising, and needing to think about raising the OCR again.   They were totally conventional sorts of line for central bankers to enunciate, especially if they were getting uneasy about approaching the conventional limits of the OCR.  I commended the Bank at the time.

This year the Bank –  Governor and MPC –  seem to have given up again, just when it matters; amid the most severe economic downturn in ages, amid significant actual falls in inflation expectations.  As a reminder, unless steps have been taken to remove the effective lower bound on nominal interest rates (and that has not been done anywhere yet) then the lower inflation expectations are, all else equal, the less monetary policy capacity there is to do the core macro-stabilisation job of monetary policy.   And that risks being a self-reinforcing dynamic.

There is no single or ideal measure of inflation expectations.  There are different classes of people/firms for whom such expectations matter, and different time horizons that matter.   Very short-term expectations get thrown around by the short-term noise (notably fluctuations in oil prices).  Very long-term expectations (a) may not matter much (since there are few very long-term nominal contracts) and (b) probably won’t tell one much about the current conduct of macro policy (whatever inflation is going to be between, say, 2045 and 2050 isn’t likely to much influenced by whatever is going on now, or those –  ministers or MPCs –  making monetary policy decisions now.

For a long time, the Reserve Bank’s preferred measure of inflation expectations was the two-year ahead measure from the Bank’s survey of the expectations of several dozen moderately-informed or expert observers.  Two years got beyond the high-frequency noise, and the survey only added questions about five and ten years expectations in 2017. 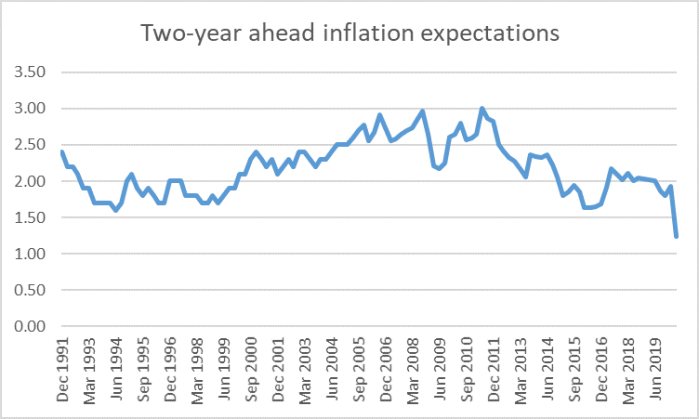 In the latest published survey expectations fall very sharply.    There will be an update on this series published next week.  I wouldn’t be surprised if there was a bit of a bounce, but I wouldn’t expect it to be large.  The Reserve Bank’s own Monetary Policy Statement will be released the following week.  Perhaps they may have become a bit more optimistic, but recall that in May their inflation outlook –  even backed by their beliefs about the efficacy of their LSAP bond purchases –  was very weak.   Two years ahead their preferred scenario had inflation just getting back up to about 1 per cent.

Now, of course, things are somewhat freer in New Zealand than they were back when those earlier surveys and forecasts were done –  perhaps even more so, sooner, than most expected back then.  On the other hand, the border restrictions remain firmly in place and the wider world economy –  which seems to get all too little comment here –  is only getting worse.   I noticed in the Dom-Post this morning that that is now the official advice of The Treasury to the Minister of Finance.

All of this is, however, known by people participating in the government bond market.  And since the New Zealand government now issues a fairly wide range of bonds, and a mix of conventional bonds and inflation-indexed bonds, we can get a timely read on the inflation rates that, if realised, would leave investors equally well off having held a conventional bond or an inflation-indexed bond (the “breakevens”).   They aren’t a formal measure of inflation expectations, and at times can be affected by extreme illiquidity events, but it is also unlikely there is no relevant information (although Reserve Bank commentary tends to act as if this data can/should be completely ignored).

For a long time, there was only a single indexed bond on issue in New Zealand.  The Bank had persuaded the government to issue them back in the mid 1990s, but then emerging budget surpluses meant issuance was discontinued.  The single indexed bond matured in February 2016.  For a long time the longest conventional bond was a 10 year maturity.  But even with all those limitations, the gap between the indexed bond yield and the Bank’s 10 year conventional bond rate looked plausibly consistent with “true” inflation expectations.  Through much of the 00s, for example, the breakeven was edging up to average about 2.5 per cent.   Recall that there was never much of the indexed bond on issue, and never much liquidity either.

Since 2012 there has been a new programme of inflation-indexed bond issuance, and there are now four maturities on issue (September 2025. 2030. 2035, and 2040).   Go back five or six years to the time when the Reserve Bank (and most the market) thought higher interest rates were in order and you find that the breakevens were close to 2 per cent.  Given that in 2012 the government had slightly reframed the Reserve Bank’s monetary policy goal to require them to focus on the target midpoint of 2 per cent, breakevens around that level were what one would have hoped to see.  And did.

After that, things started to go wrong, with the breakevens beginning to fall persistently below target.  As it happens, of course, by this time it was increasingly realised that actual core inflation was also falling below target.

But what of the more recent period?   One problem in doing this sort of analysis, if you don’t have access to a Bloomberg terminal, is that the data on the Reserve Bank website used to provide yields for the four individual inflation-indexed bonds, but only benchmark five and ten year yields for conventional bonds (ie not yields on specifically identified individual bonds).  That didn’t much over very short-term horizon –  there just aren’t that many bonds on issue –  but potentially did for slightly longer-term comparisons.  However, in the last week the Bank has started releasing daily data on yields on all the individual government bonds on issue, indexed and conventional, back to the start of 2018.  That is most welcome.  As it happens, the government has also now started issuing a conventional bond maturing in May 2041, reasonably close to the maturity of the longest inflation-indexed bond.

In this chart I’ve calculated breakevens as follows:

These breakevens, or implied inflation expectations, were uncomfortably low (relative to the target) even back in 2018. Things have only got worse since then.

Not that these are not breakeven inflation rates (or expectations) for a single year –  say 2025-  in the way that survey expectations (including the RB survey) are.  They are indications about average CPI inflation over the whole period to, say, 2025.

I thought there were several things that were interesting about the chart:

There are pluses and minus to be taken from all this.

The positive feature is that if one looks 15 years ahead, markets don’t expect New Zealand to deliver on a 2 per cent inflation target, but their (implied) view on that is no worse now than it was last year.  That isn’t great but it is better than the alternative.   On the other hand, it tells you almost nothing about the current conduct of monetary policy, since (a) current monetary policy won’t be affecting inflation outcomes 15 years hence, and (b) almost certainly, neither will the current key players (Orr or Robertson).

The negative feature is just how weak those five-year average expectations are, averaging around 0.4 per cent, well below the bottom of the target range, let alone the 2 per cent midpoint the MPC is supposed to focus on.   And this is the horizon that current monetary policy is affecting, and which the current key players (Orr, Robertson, and the MPC) will be affecting.    And these breakevens are down so far this year that real interest rates have not fallen much at all.   Here, for example, is the real yield on the 2025 inflation-indexed bond.

No change over a year.  Or even if there was something odd going on at the end of July last year, no material change since (say) February this year, even as a severe recession and deflationary shock hit New Zealand and the world.  Even with the Reserve Bank intervening to support this market.   That is a pretty damning commentary on monetary policy simply not doing its job –  real yields over a five year horizon will always be heavily influenced by expected changes in short-term real policy rates.

As a final cautionary note, the deflationary shock was pretty much global in its effect, but here is the five year breakeven chart for the United States since the start of 2018.

Not only can you see how much closer the breakeven has been to the Fed’s target for the inflation rate but, more importantly in the current context, how strongly the five-year breakeven has rebounded since March.   It is a very different picture to what we’ve seen in New Zealand.  .  [UPDATE: A reader  draws my attention to the fact that the Fed is buying TIPS.]

The Governor and the MPC seem to have been all too keen to abdicate responsibility in this crisis, deferring almost everything to fiscal policy and simply refusing to cut the OCR further.  How much fiscal stimulus to do is a political matter outside the Bank’s control, but however much the government has done –  and it will soon be doing less, as the wage subsidy ends –  it is increasingly clear that the Reserve Bank is simply not doing enough.  Low and falling inflation expectations are inappropriate, inconsistent with the mandate, at the best of times, but far more troubling when central banks are unwilling to take official short-term rates deeply negative.  The Governor and his colleagues seemed to know that last year when it wasn’t much of an issue, but to have forgotten –  or simply chosen to ignore it –  this year.  It is as if they are simply indifferent to the (un)employment consequences.  That shouldn’t be acceptable, including to the Bank’s Board and the Minister of Finance who are responsible to us for the MPC’s stewardship.