One of the objections sometimes raised to my advocacy of a deeply negative OCR is along the lines of “it will only lift asset prices”, with the implication –  and sometimes directly stated –  that that is what has happened in the last decade or so, even as policy rates in most of the advanced world fell from materially positive numbers to somewhere near zero.   In 2007, policy rates in the US and the UK had been over 5 per cent, in the euro-area 4 per cent, and in New Zealand and Australia higher than all those rates.   Only Japan was then in the extreme low interest rate club.

The asset price that tends to attract most attention in New Zealand is house prices (really house+ land).  The Bank for International Settlements maintain a nice quarterly database of real house prices for a large group of advanced and emerging economies.

Very little change at all.

The aggregate advanced economy measure only starts in December 2007, and for quite a lot of countries the data starts getting thin for earlier periods.   But for the UK, the euro-area, and the US, I had a look at the previous decade –  over which period policy interest rates hadn’t changed much at all (ups and downs of course during the period) – and in each case real house prices increases were much more rapid in that period than in the more recent (extremely low interest rate) one.   The US had experienced a 53 per cent increase in house prices –  and they had already fallen back from peak by the end of 2007 –  and the euro-area a 40 per cent increase.  In Japan –  very low interest rates throughout –  real house prices had fallen substantially over the 1997 to 2007 period.

Of course, within these aggregates for the last decade or so there is a lot of cross-country variation.  We all know real house prices in New Zealand and Australia have risen a lot.   In some other countries, they’ve fallen a lot.    But even in New Zealand, Australia and Canada, the rate of increase has been less in the last (low interest rate) 12 years than it was in the previous decade.

That shouldn’t really be a surprise.  After all, in principle, houses are reproducible assets (some labour, some timber, some concrete, some fittings) and in few countries is very much of land built on.   Moreover, interest rates aren’t where they’ve been as the result of some toss of a coin, or a draw from a random number generator; they reflect underlying changes in savings/investment imbalances, which central banks adjust policy rates to more or less reflect.

When a wide range of countries have had fairly similar interest rate experiences (and inflation outcomes; the check on whether monetary policy is out of step), and yet have had very different house price experiences, it probably suggests that some non-interest rate factors have been at work.   Of course, in some cases, that might just mean working off past crises –  although if you want to cite the US there (a) recall that by the end of 2007 real house prices had already fallen by 15 per cent from peak, and (b) that in the boom years nationwide real house prices in the US never rose as much as they did in, for example, Australia and New Zealand.

A more plausible story is that some combination and land-use restrictions and population pressures continue to explain a lot about differential house prices performance in the years since 2007.   In New Zealand and Australia, for example, we have had tight planning restrictions and rapid population growth.    I don’t know much about planning rules in central and eastern Europe, but there isn’t much population growth (deliberate understatement here) in countries with strong economic growth such as Bulgaria, Romania, Slovenia, Slovakia and the Baltics.   It isn’t a simple one-for-one story, but taken across the advanced economies as a whole it just doesn’t look as though low interest rates are a credible part of the house price story –  house prices, in aggregate, not having done much at all.

Of course, had central banks completely ignored the market signals re savings/investment pressures and simply held policy rates up then no doubt house prices would have been lower.  Then again, we’d also have had persistent deflation and (more importantly) unemployment rates that stayed much higher for longer and more persistent losses of output.

On a completely different topic, I found myself yesterday on an email exchange with some fiscal hawks, very worried about the future level of public debt.

I’ve noted previously that on the Treasury budget numbers our ratio of net debt to GDP in 2023/24 would still be sufficiently modest by international standards that if we had had that high a debt ratio last year, we’d still have been (narrowly) in the less-indebted half of the OECD.

Another way of looking at things is to take the government at their word and assume that by the end of the forecast period the Budget is more or less back to balance, such that the nominal level of debt stabilises at the level forecast for the end of 2023/24.

If that were to happen that what happens to the debt ratio depends on how much growth in nominal GDP the economy manages in the years ahead.   If we assume that the terms of trade is stable (or that the only safe prediction is that we don’t know, so assume no change), then there are three components to the rate of growth of nominal GDP.    As an illustrative experiment I jotted down a range of possible average outcomes for each.

So I’d assume growth in nominal GDP averaging 2.75 per cent over the decades beyond 2024.  Of course, there will be booms and recessions in that time, but this is just an average.   And then I’ve taken two alternative scenarios –  one in which nominal GDP growth averages 2.25 per cent, and one in which it averages 3.25 per cent.   Those aren’t extremes, and one could envisage even higher or lower numbers.

But this is what a net debt chart looks like out to 2064. 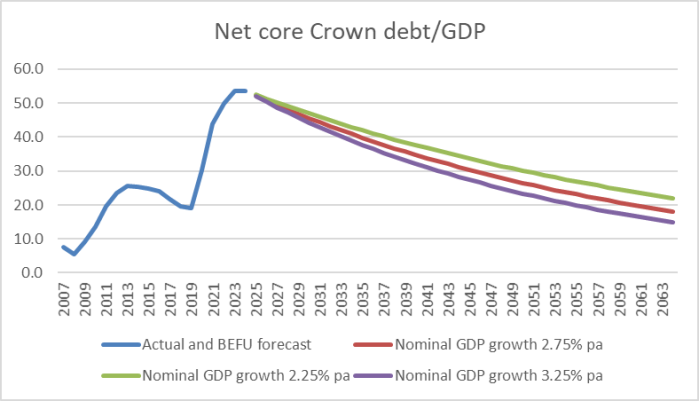 Even on the worst of these scenarios this (exaggerated, because it excludes NZSF assets) net debt measure is back to 30 per cent of GDP by 2050.   That doesn’t seem too bad to me for a one in a hundred year shock (as the government likes to claim) or –  less pardonably –  a one in 160 year shock as the Reserve Bank Governor was talking up the other day.

Of course, fiscal hawks will say, “but what if another really nasty shocks happens in the meantime?”.  Well, of course we would have to face that if it comes –  and it could –  but, as I noted, our net debt at peak is not high by pre-crisis international standards, and isn’t even high by our own longer-term historical standards.

Governments might choose to lower the debt faster, although if real servicing costs remain low it is difficult to see why one would, since faster consolidation involves either higher taxes than otherwise (with real deadweight costs) or less spending than otherwise (and while each bit of spending has its own antagonists, there is a case to be made for most of it).   There is precisely no evidence that anything important would suffer if our net public debt took a trajectory something like the central scenario in that graph.

(Of course, it is a purely illustrative scenario, and the composition of nominal GDP growth does matter to the budgetary implications –  eg faster population growth means more infrastructure demand, faster inflation might mean some unanticipated inflation tax, faster productivity is more like pure gain –  but there is no reason to suppose that if governments can get back to balance (as they repeatedly have now for decades) that we will need anything much beyond that.  Getting back to balance will require discipline and focus –  and a strong credible recovery would help –  but since most of the fiscal measures to date have been avowedly temporary, doing so should not be beyond our political system, whichever group of parties happens to be governing by then.