There was a little flurry of media coverage over the weekend about the latest set of cuts in retail mortgage interest rates.  But it is worth keeping these changes in some perspective.

The Reserve Bank publishes monthly data for the “special” rates advertised for new borrowers (or those moving to another bank) and we can get a read of current rates from bank websites, as summarised in the tables on interest.co.nz.

So how much have residential mortgage rates fallen since the coronavirus slump began?  As it happens, rates had been pretty stable for several months up to February, so this chart compares the latest rates on offer with the average for the period November to February.

For most maturities, that’s not nothing.

On the hand, these are nominal interest rates.  And we know that the expected future inflation rate has fallen.   There is a variety of measures, survey-based and market.  The one the Reserve Bank has typically paid most attention to is the two-year ahead measure in its quarterly Survey of Expectations.  On that measure, inflation expectations have fallen by 0.62 percentage points since the pre-crisis period (the one year ahead measure shows a larger fall, the ANZ one year ahead measure a smaller fall).

Apply that fall in inflation expectations to those “specials” and the real –  inflation-adjusted – version of the chart now looks like this. 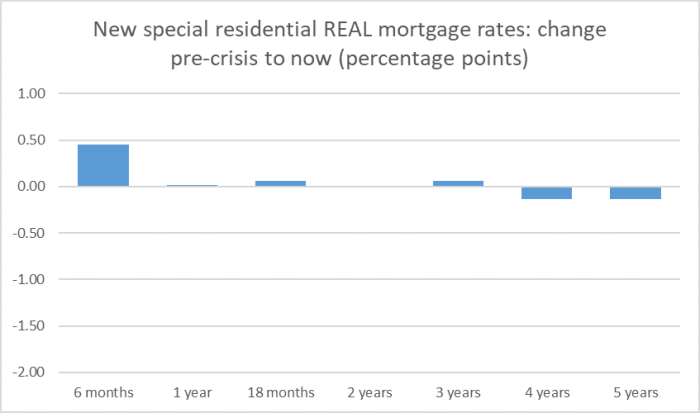 I guess there is still a slight reduction in longer-term real rates, but…..not many people in New Zealand fix for four or five years.  The market is concentrated on the shorter-term fixed rates (at present, it appears, the 18 month term) and there has been no reduction in real interest rates there at all.

Term deposit rates have come down a bit more too.  But here is how the chart of those rates looks if we compare current rates with those around the turn of the year.  I’ve shown the nominal rates and real rates (using the same drop in inflationn expectations as above) on the same chart.

Pretty much across the board, real term deposit rates have risen slightly since the crisis began (including at what appears to be the most competitive part of the market, for terms of 6-12 months).  It is an odd response to a really serious economic slump.

Don’t blame the banks, or depositors for that matter; this is about choices made by the Reserve Bank Monetary Policy Committee – the prominent ones (Orr especially) and those faceless unaccountable external ones (Buckle, Harris, Saunders), all appointed by the current Minister of Finance.

The Governor keeps talking about getting interest rates as low as possible.  But they clearly aren’t – term deposits are mostly still a bit above 2 per cent (and far higher than in Australia) –  and yet the MPC has pledged, and repeatedly reiterated its dogmatic commitment based on no published analysis, to not cut rates any further until at least next March, still 10 months away.

And yet this is a really serious downturn.   Everyone seems to agree on that.  All the unemployment predictions –  even with the temporary cover (keeping people out of the official statistics) of the wage subsidy scheme –  involve higher peaks than we saw in the 2008/09 recession.  Even with big fiscal commitments, nominal GDP is expected to be way lower than previously expected, and the Bank expects to undershoot the bottom of its inflation target for a couple of years (for which there was nothing comparable in 2008/09).

How, then, did retail rates (real and nominal) behave over 2008/09?  Recall that that was an event that had its foundation in financial system problems, and even if the credit concerns weren’t specific to New Zealand the problems affected our banks’ access to funds, pricing etc.

The data are bit thinner for that period.   The Reserve Bank was only publishing “standard” mortgage rates, and single (six month) term deposit rate.  Oh, and it is a bit less clear when to date comparisons from.  Retail rates had gone on rising into 2008 (with the Bank’s acquiescence) as offshore funding costs were rising, and at the other end, shorter-term rates kept dropping further into 2009 than longer-term fixed rates did.    Inflation expectations also fell during that recession, on the Bank’s two-year ahead measure perhaps by about half a per cent.

But this is what happened from the end of 2007 to April 2009. (Changing start or end dates changes some of the numbers –  either way – by up to perhaps 50 basis points, mostly small on the scale of this chart.)

In other words, falls in retail rates (at the horizons where most of the business was written) of hundreds of basis points.   And that, in the Bank’s view (correctly as it turned out) was consistent with keeping inflation in the target range, even if not quite as high as they would have liked).

The Governor keeps claiming that his Large Scale Asset Purchase programme –  buying huge amounts of government bonds now yielding less than 1 per cent, in exchange for issuing huge amount of Reserve Bank deposits currently yielding 0.25 per cent –  is hugely effective and a fully adequate substitute for choosing not to do more with the OCR.    One can get down in the weeds of detailed arguments about what the LSAP may or may not be doing at the margin to bond rates or swaps rates, but whatever those effects may be –  and I reckon we are pretty safe in concluding that they are mostly small –  the rates that firms and households are actually receiving/paying is the bottom line.

In real terms, the household rates shown above have hardly moved at all, and there is little or nothing to suggest that picture facing businesses will be materially better (eg headline SME rates have fallen no further, and many larger businesses have facilities on which they pay a fixed margin over bank bill rates.  Bank bill rates have fallen by about 1 per cent since the start of the year, so in real terms a fall of perhaps 0.4 percentage points.  The contrast to 08/09 remains striking.

Of course, there is also the exchange rate.  The Governor claims to be successfully influencing it as well.   It is always difficult to know where to date comparisons for exchange rates, but here I’ve shown the fall in the exchange rate in the last two recessions: 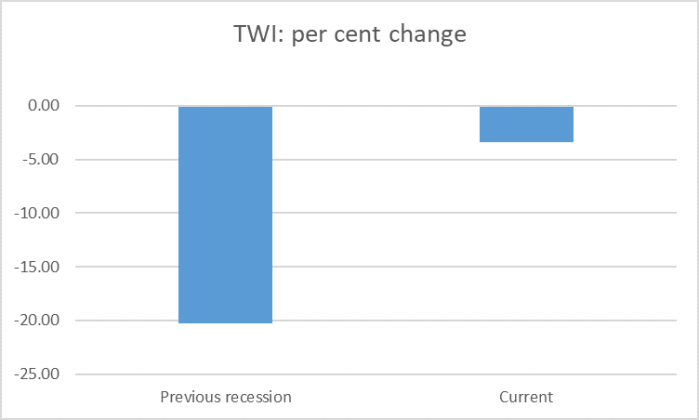 Monetary policy just is not doing its bit, even once all the fiscal support is factored into the projections.  That is a pure choice by the MPC.

We don’t know why they’ve just chosen not to do their job –  aiming for 2 per cent inflation and, as much as they can consistent with that, supporting a speedy return to full employment.  Last year, MPC seemed to embrace their mandate with some gusto. Now they appear like stunned animals caught in the headlights, uninterested in doing what they are paid for –  all while their spokesman keeps claiming to be doing a lot.

It is pretty reprehensible, and I find it quite remarkable that the MPC –  all of them, not just the Governor –  have not been asked harder questions about their failures.  Instead, much of the media seem to treat their acknowledged failure to ensure that banks’ operational systems etc were ready for negative rates as just “one of those things”, as if it could happen to anyone –  never for example drawing the contrast with Y2K, when the Bank proactively ensured it and the banks were ready, with contingency plans as well.   And notwithstanding that all of the data in this post are readily available, none has been yet heard to ask the Governor –  and his MPC –  why they are content with such trivial changes in real interest rates even when, with all their avowed enthusiasm for it, in combination fiscal policy and monetary policy in combination still have the Bank quite openly acknowledging that inflation will undershoot, and apparently not very bothered about the unemployed either.

Of course, the Minister of Finance bears responsibility for all this, and for all the individuals involved. Perhaps an Opposition that wanted to ask hard questions about the government’s stewardship at present –  even perhaps flag a different more pro-active approach –  might ask him just why he thinks it is appropriate for real interest rates to have hardly changed at all (and the real exchange rate not much more), even as he is willing to lend to the weakest business credits are far lower rates than his central bank’s monetary policy would support more generally.