To have listened to Winston Peters’ speech in Parliament the other day –  which wasn’t all as bad as the media reporting had led me to believe – or the joint Herald op-ed from the New Zealand, UK, Australian, and Singaporean trade ministers, you might have supposed that New Zealand’s was some great foreign trade “success story”.  I put it in quote marks because of course Winston Peters –  our Foreign Minister –  seems to want to undo some of that alleged “success”, seeking “far greater autonomy for New Zealand”.  Here is the full relevant quote

Now, New Zealand First is resolved that our future economy will have these features about it, because they’ve learnt something. One: far greater autonomy for New Zealand. In short, if we can grow it or make it at near competitive prices, then we will grow it or make it, use it or export it, rather than use valuable offshore funds importing it.

Some mix of mercantilism  (more exports good for their own sake) and insulationism (less international trade all round).

We are four independent trading nations who have derived success by operating globally. Almost two-thirds of Britain’s economy is made up of trade. One in five Australian jobs is trade related. In New Zealand that number is one in four. Nearly two-thirds of Singapore’s GDP is generated by external demand.

Success story? That would be the country that has spent 70 years slipping, sporadically but decisively (never really interrupted) down the OECD productivity league tables.  Productivity growth, after all, being the main basis for improved material living standards, and for many non-material options.

Here is foreign trade as a per cent of GDP (average of imports and exports) for each OECD country for the latest calendar year the OECD has data for (mostly 2019).

I use foreign trade (imports and exports) to make the point that, for a whole economy, we mostly export to import (some of vice versa as well).  But we are also fourth to bottom if one looks as exports alone.

Perhaps you think that doesn’t really matter much; after all, much richer Australia and the United States have lower trade shares than us.  Unfortunately for that story, larger countries tend to do a lot less foreign trade (as a share of GDP) than smaller ones –   there simply are lots more home markets for firms in the US – and even Australia has a population five times our size.

Ah, but we opened up our economy decades ago –  all that stuff Winston Peters lamented much of –  and we’ve signed all those trade agreements ministers and officials like to boast about.  Surely, then, we trade more heavily than we used to, surely we’ve improved our relative performance? 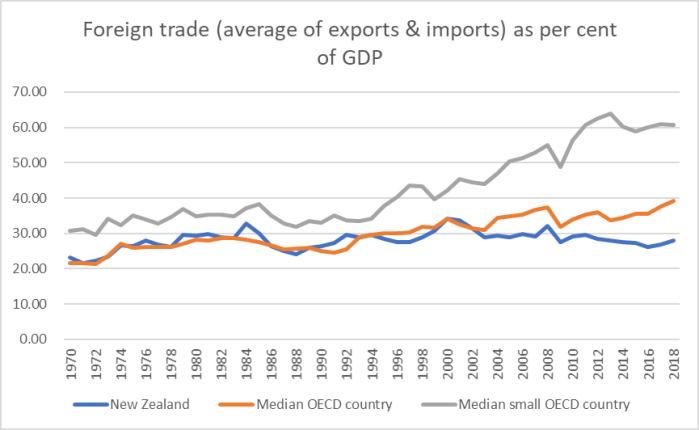 But no.    New Zealand’s foreign trade now is a bit less (share of GDP) than it was in 1980, and if we started behind the other small countries, we’ve lagged further behind, especially this century. 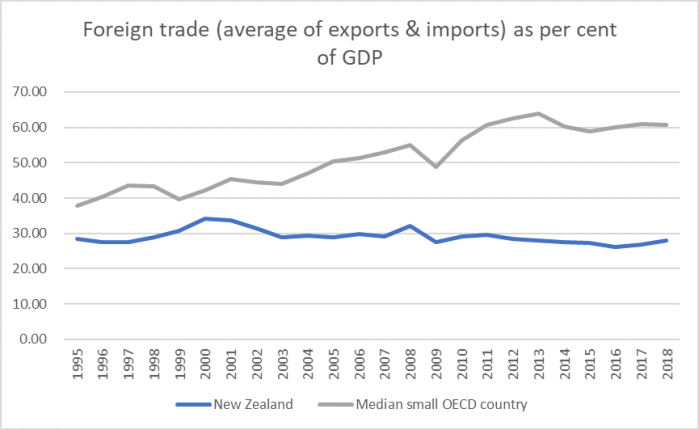 I suppose at least the gap hasn’t widened further in the last five or six years.

And then people (reasonably) point out that in some countries –  notably in Europe –  there is a lot of cross-border trade in partly-assembled products.  That is a plus for those countries, whose firms really can gain by specialisation in specific aspects of a production chain, but it does inflate the gross foreign trade numbers.

Fortunately, the OECD has developed indicators of the amount of domestic value-added in each country’s exports  (there is a range of other indicators in the value-added database as well, but here I’m just going to fall back on exports).  In some (particularly central European) countries only just over 50 per cent of gross exports represent domestic value-added.  In New Zealand (and Australia and the US) that share is close to 90 per cent.

So how does domestic value-added in exports look as a share of GDP across the OECD countries (these data are available only with quite a lag, so the latest numbers are for 2016)?

It lifts New Zealand slightly up the league table, but all the countries below us have much larger populations –  and domestic markets –  than we do.  By contrast, all the countries to the right of the chart are small (or in the Dutch case just a bit above small).  And of the small countries – 12 million or fewer people (from where there is a step up to the Netherlands) our population is pretty close to the median.

It isn’t the tightest relationship in the world –  there is a lot else going on –  but the point that small countries tend to export (and import) more is pretty clear.  And New Zealand –  red dot –  stands out well below the line.

Our trade performance has been –  is –  woeful.  We simply don’t export (or import) much for a country as small as we are. In fact, not many countries –  even very large ones –  export/import less than we do as a share of GDP.

So the self-congratulatory lines that David Parker (and MFAT officials, and a succession of previous National trade ministers) run is deeply flawed.  But at least, in some sense, their hearts are in the right place, seeming to recognise that a more outward-oriented New Zealand is the only sustainable path to much greater prosperity.  From Winston Peters, on the other hand, the idea that we should be importing even less –  in a small country that already imports the fourth lowest share of GDP in the entire OECD –  is just headshakingly bad.

(If perhaps not quite as bad as Steve Keen who proposes that New Zealand and Australia are ideally placed to be some sort of long-term “trade bubble” –  doing as little as possible, even beyond Covid –  with the rest of the world, as if we’ll suddenly become a major market for coal, LNG, and iron ore and they will suddenly become a leading market for dairy, lamb, and export education.)