Skip to content
HomeSelf-imposed constraints (the latest from the RB)

The Governor of the Reserve Bank had an op-ed in the Sunday Star Times yesterday, and I’d intended to use it as the basis for post today.   The column is quite as complacent, relative to the fast-unfolding reality, as anything we’ve had from Orr since first we heard from him on the coronavirus topic at the mid-February Monetary Policy Statement.  Even last week he was telling Mike Hosking that his level of concern wasn’t really that high (“six out of ten” was his line, and none of it sounded like simply an attempt not to spark a panic, and he told RNZ’s Kathryn Ryan that it was ridiculous to compare what was unfolding with the Great Depression (of course the specific causes are differerent, but when people make those comparisons they are typically highlighting the scale and severity of the drop in output and/or the  –  largely self-imposed –  limitations of monetary policy).  Everything Orr has said on the subject has sounded as if it might have been reasonable 10 days earlier, but not when he actually said or wrote things.   Complacency has been the best description, in a climate in which it is the last thing we can afford from our powerful, but barely accountable, head central banker.

But I’m not going to waste time unpicking the latest column, which it isn’t even clear why he wrote.

Before moving on, this is the standard real GDP estimates for New Zealand for the Great Depression (there are no official numbers that far back, although there were a lot of partial indicators). 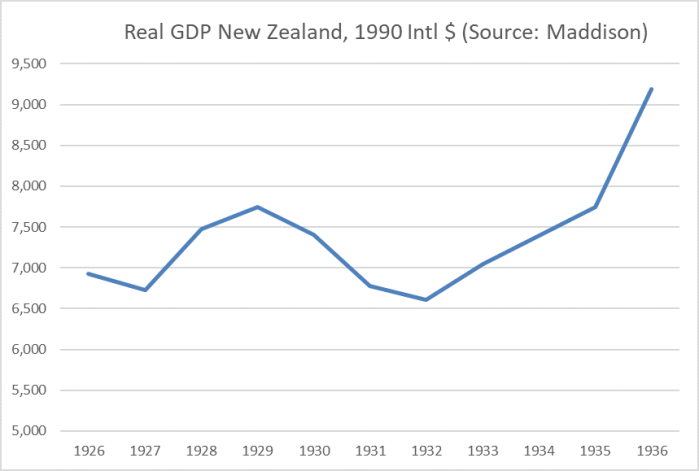 Real GDP in New Zealand is estimated to have fallen by about 15 per cent, peak to trough, over three years ( as a reminder it had fully regained those losses, though not got back to the previous trend, before Labour’s icon Michael Savage took office in December 1935).

Any bets on how deep the fall will be in New Zealand’s GDP over even just the first half of this year?   It depends a bit on how intense any lockdown is, but if someone forced me to put a number on the likely fall (June quarter GDP relative to last December quarter’s) it would probably be 25-30 per cent (similarly numbers are bruited about by serious people in the US, with the risks skewed to something worse.

And, reverting to the Great Depression, what got things going again then?  Well, the UK –  our major market, and less hard-hit than many countries – went off the Gold Standard in September 1931 allowing a substantial easing in monetary conditions.  And we, without yet having a proper currency of our own, further devalued against sterling in January 1933  (the US threw in some monetary policy easing later in 1933 as well).  In other words, letting off the previous self-imposed shackles of monetary policy made a great deal of difference for the better.

This is a quite different, but for now much more severe, sort of shock.    It seems unlikely that we can envisage even beginning much of any economic recovery until the virus situation is more or less sustainably under control, not just here and abroad.  Neither monetary nor fiscal policy will stop the deep drop in GDP going on right now, and probably shouldn’t even think to try right now (we are deliberately closing things down as part of fighting the virus).

But that doesn’t mean significant monetary policy easing would not still be helpful.  There are those worrying falls in inflation expectations, and more immediately there are the still-high servicing costs of a rising stock of private debt.  Public and private debt overhangs were a big issues, including in New Zealand, in the Great Depression, exacerbated then by the sharp fall in the price level.    It is pretty unconscionable that in this climate, where time has no value, floating rate business borrrowers are still paying 5 , 6 or more per cent interest rates.  That is almost solely because the Governor and the Bank refuse to do anything about significant negative interest rates possible –  it is this generation’s Gold Standard (there was a real aversion to moving away from it, and yet doing so finally made a huge difference for the better). 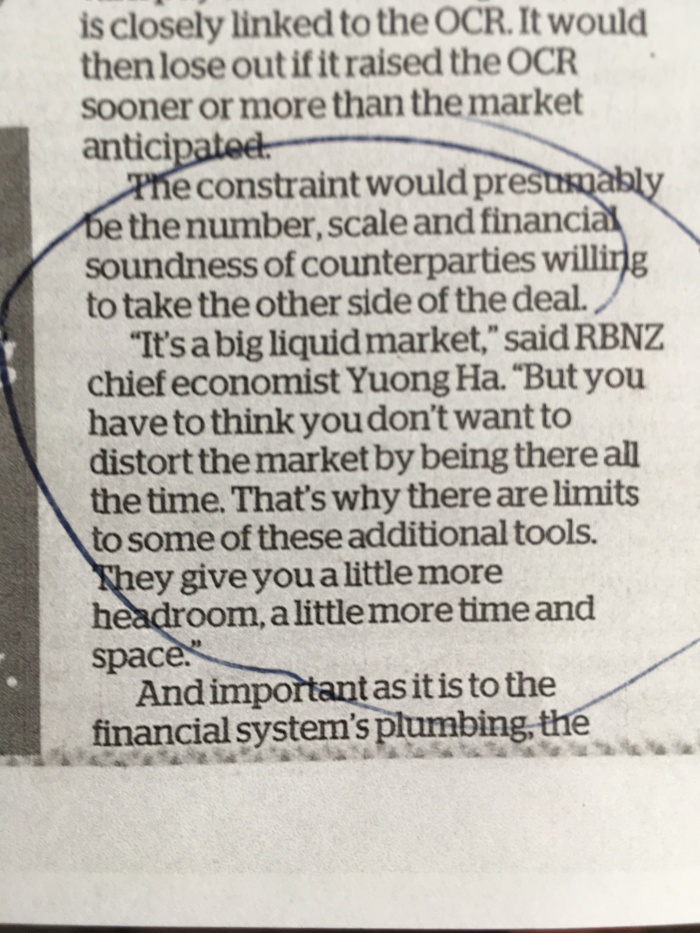 And I think it is safe to say that we have had fairly confirmation of Ha’s (generally not very controversial point) this morning.  The Bank and MPC issued a statement in which they committed to buying $30 billion of government bonds over the coming year.

It was a pretty feeble programme, even if the headline number was big.  A year is a very long time at present.  And whereas the RBA the other day announced an asset purchase programme centred around targeting government bond yields of three years to maturity at 0.25 per cent, it isn’t really clear what the goal of our MPC actually.  Settlement cash balances –  which is what banks get when market participants sell bonds to the Reserve Bank –  aren’t the binding constraint on anything.

And what did this large asset purchase programme announcement do?   The yield on a 10 year government bond fell by 50 basis points.  That is a big move for a single day, but……that still leaves the 10 year bond rate materially above the lows reached after the MPC’s cut in the OCR last Monday.  Quite possibly, without this action bond yields and corporate credit spreads would have spiked still higher.  So I’m not opposed to the action, but all it has done is to stop monetary and financial conditions tightening further, when what the circumstances demand is a really substantial easing of monetary conditions.    It isn’t as if there was a great deal (much at all, it seems) of an easing in the exchange rate either.   And this was the MPC’s preferred unconventional tool……as I said last week, if they are going to refuse to go negative it really is game over for monetary policy, at just the time when adjustment is most needed.  Recall the 400+ basis point cuts in retail rates we typically see in a New Zealand downturn, all of which will have been less dramatic than what we are now experiencing.  Central banks huff and puff and wave their hands to suggest lots of action, and they have done useful stuff on liquidity (again to stop conditions tightening) but the Reserve Bank of New Zealand is not alone it seems in playing distraction, to divert attention from what little monetary policy is doing given the self-imposed (wholly self-imposed) constraints.

(All of which said, even relative to the RBA, our MPC is not doing as much as they could.  As noted above, they could explicitly target and securely anchor government bond yields.  They could also still cut the OCR, even without going negative: the headline rates in both countries are 0.25 per cent, but in New Zealand that is the rate we pay banks on deposits at the Reserve Bank, while in Australia the deposit rate is lower again.   These are small differences, of course, but there is no sound analytical or systems reasons for not using all the leeway even their self-imposed constraints allow them.

Of course, the much more immediate huge issue is what the government is going to do to underpin the credit system and support a willingness of banks to lend and firms to borrow.  The only secure foundation for that remains some mix of grants and income guarantees (which will become grants).  I can only repeat that the most useful way of thinking about these thing is as the national pandemic economic policy we would have adopted twenty years ago if we’d thought hard enough, been serious enough, about what could happen: undertake to underpin all net incomes at 80 per cent of last year’s for the first year (reducing after that if the issue is still with us).    The fiscal costs are easily manageable for New Zealand: if guaranteeing 80 per cent of incomes than even if full year GDP fell 40 per cent, it would still only be a fiscal commitment of 20 per cent of GDP, and we are starting with net government debt (properly defined) of zero per cent.   It isn’t the exact dollars that really matter at this point, let alone trying to distinguish good and bad firms, but the certainty such a guarantee –  ex post insurance policy –  would provide in capping the extreme downside risks, individually and collectively for the first year.  It wouldn’t stop all exits –  some have already happened, some firms are likely to think it not viable to come back even with a grant/guarantee –  but it is the best option to help stabilise the economic damage, and to ensure that banks are able and willing to play a strongly facilitative part.

On Q&A yesterday the Minister of Finance suggested more announcements very shortly. I hope so but what worries is that once again whatever they do will be inadequate and not really get ahead of the issue. There is an opportunity now, but time is running down fast.

6 thoughts on “Self-imposed constraints (the latest from the RB)”