It astounds me that I have not seen this chart once in the New Zealand media (or from any of our political and bureuacratic officeholders –  I hesitate to call them “leaders”). 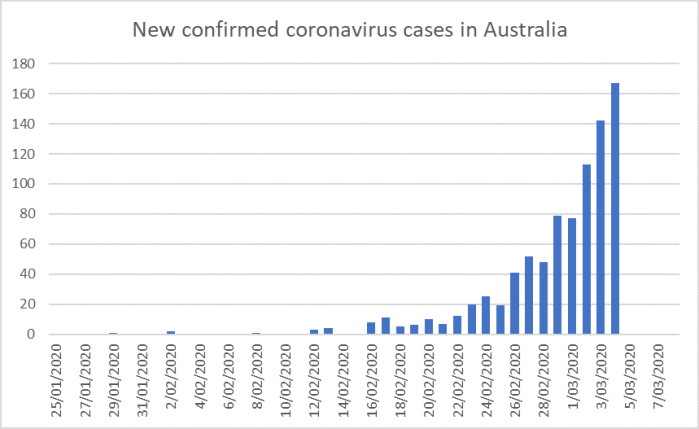 Australia confirmed their first “community outbreak” case on 3 March, when there were 33 cases in total (just fewer than we had yesterday).

It is much the same locally-exponential pattern we’ve seen in so many other countries.  If current rates of increase continue then by the end of tomorrow Australia will have per capita numbers akin to those in the US or UK yesterday.  That is the sort of impact exponential growth has.

There was routinely a lot of trans-Tasman travel.  There is, apparently, still a lot of travel this way as people try to get home.  And while in the last few days self-isolation was supposed to be practiced, there are numerous stories of it simply not being following consistently.  My worst one was a story someone told me the other day: they’d gone to the hairdresser, who was young and pregnant. The hairdresser passed on the story of a customer who’d come in the previous day and commented that while she was in self-isolation she really needed to get her hair done.  The hairdresser, perhaps unsurprisingly burst into tears.

All this means that one can think of New Zealand and Australia as having been essentially a Common Virus Area –  what is mine is yours, and what is yours is mine.  Since we haven’t been doing the sort of aggressive mass testing that some have called for –  although the pace has stepped up in the last few days –  it seems simply irresponsible for the government to be running policy on the presumption that we do not have community out break here.  No one can be certain, but the question has to be what is the safer assumption to make decisions on right now.  Given the rest of the world, given Australia, given the lags (when you confirm community outbreak you should wish you’d acted a couple of weeks earlier), the only sensible approach now is to assume presence, and act accordingly.  But apparently in an interview on Newshub this morning, the government’s chief official on health matters said they were still assuming the opposite, staking a great deal on their view being right.

I see the Prime Minister is to speak at midday.  We’ll see what she says.

For me, I’m less interested in specific announcements or new rules, but on whether there is evidence that (a) they are going to break with the past and actually take the public into their confidence and engage on the issues, options, costs and risks, (b) whether they finally are willing to front with the public on the severity of what is to come, health or economics, (c) whether there is any sign of a developed stable framework for thinking about policy responses through time (d) whether they any sense of an exit strategy for whatever approaches they adopt, (e) whether there is any sign they have identified what things they belief to be more important than public health in this specific situation, and (f) whether they have thought through seriously how sustainable, economically or socially, whatever strategy they adopt is, or whether they are still just attempting to buy “a bit more time” and risking lurching again before long.

These are difficult issues, and few leaders here or abroad seem to be handling them at all well, but no one made any of them take office.

I had been planning to write a post today prompted by the economic and other policy choices and trade-offs implied by the very useful Imperial College paper published earlier in the week, but I might now come back to that –  and particularly questions about whether suppression strategies are worth the costs to the economy and society and its freedoms and values, if anything like what the Imperial College authors suggest it implies were to be an accurate representation of the issue.

UPDATE: Unfortunately, the PM’s statement did not seriously or adequately address any of the sorts of issues raised in the paragraph a couple above.

40 thoughts on “A sobering chart”