In a post earlier this week looking at national saving rates across the OECD, I included this chart 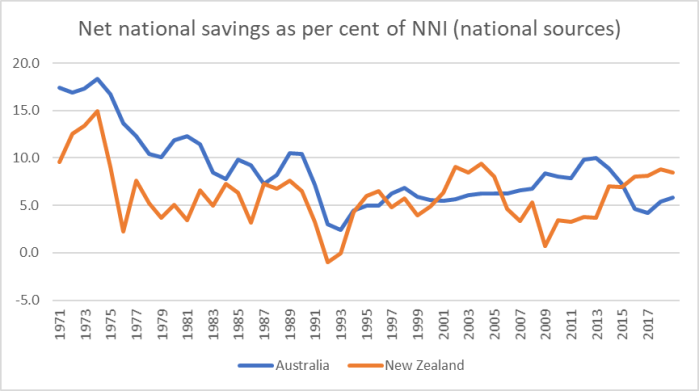 For the last few years, national saving rates in New Zealand have been higher than those in Australia.  That isn’t the popular perception, and it hasn’t been common in the past –  although for now, the gaps are no larger or more persistent than those recorded for a few years in the 00s.

Before digging behind the numbers, at least a bit, a reminder:

We can break down these saving rates for each country and see what has been happening in each of the broad sectors: households, governments, and business.   All the charts below are expressed as a share of NNI (rather than of the income of that particular sector).  In each of the charts below, New Zealand data are for March years and Australian data for June years.

First, lets have a look at general government savings 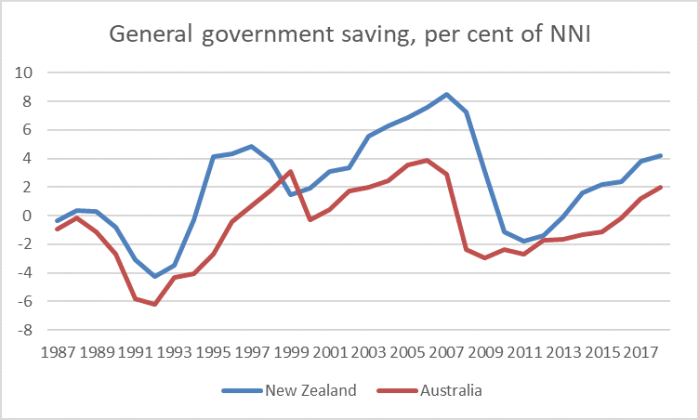 Every year but one the government savings rate (share of NNI) in New Zealand has been higher than that in Australia.

Probably to no one’s surprise 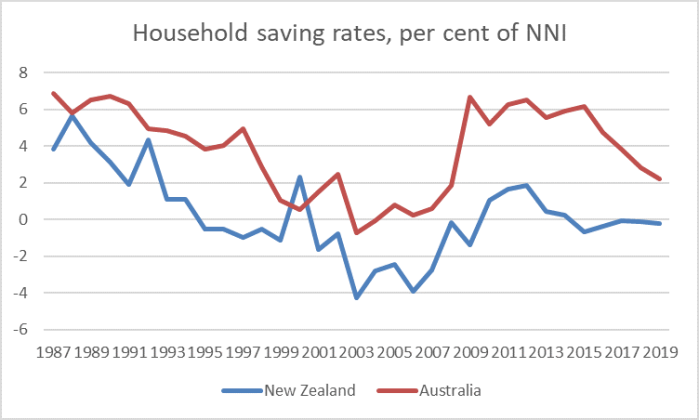 In all but one year, household (net) saving in Australia has been higher, as a per cent of NNI, than that in New Zealand.  The size of the gap between the two series hasn’t changed much over time, and there is little sign that the gap now is consistently larger than it was 30 years ago before the compulsory private savings scheme was introduced in Australia.  Both countries have had fairly rapid rates of population growth over these decades –  although the growth has been concentrated in different periods.  Over long periods of time, you’d expect a country with rapid population growth to have a higher household savings rate than one that doesn’t.   What is, perhaps, interesting about the Australian series is how far the household savings rate has dropped back again in the last few years.

And what about the business saving rate?  In aggregate the picture looks like this 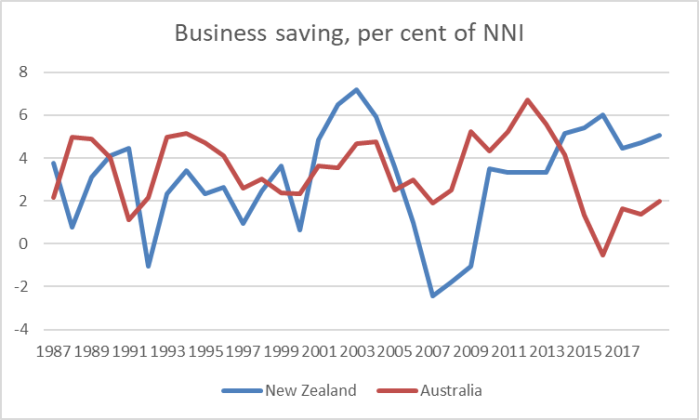 For the first decade or so of the data things are much as you’d expect.  Business saving in Australia averaged a bit higher than that in New Zealand, consistent with the fact that business investment rates tend to be higher (partly reflecting the Australian economy concentrating in quite capital intensive sector).  You can, loosely, see some cyclical effects: profits tend to fall away quite sharply in recessions and so, typically, will business savings rates.

But once one gets to this century things become harder to make sense of.  And the Australia numbers seem easier to make sense of than the New Zealand ones: in Australia as the terms of trade surged and huge new mining sector investment opportunities opened up you’d expect firms to be using higher profits and higher retained earnings to finance part of the huge surge in mining investment.  The Australian terms of trade peaked in 2011 and is much lower now.  Mining sector investment is also well past its peak.  Still, I was a bit surprised to see that overall business saving rates are now lower than they were, on average, in the 15 or so years before the terms of trade boom.

But what of New Zealand?  Why did business saving rates surge at the very start of the 00s, and then fall away so sharply –  the amplitude of that fluctuation is larger than for Australia more recently.  Some of it probably had to do with the exchange rate –  which reached a deep trough in 2000 at a time when commodity prices were high.  But it doesn’t really seem like a sufficient explanation.  And that trough was in the year to March 2007, more than a year before the recession really hit.

Despite my inclinations to look on the gloomy side, I’d almost be inclined to think positively about the recent rise in business savings rates –  higher now than they were at any other time in the 1990s –  except that there is little or no sign that these higher saving rates reflect any sense of an abundance of investment opportunities.  Business saving rates in New Zealand may well now be being boosted by the pressure on dairy farmers to use whatever earnings they can generate to pay down debt.

We can use official data to look a little further behind the business saving story, splitting the business saving rate into financial businesses and other businesses. I’m not sure why one would want to –  they are all businesses after all – but as it happened there are some interesting, but puzzling, differences uncovered by doing so.  Note that for New Zealand the data are not yet available for the March 2019 year.  And the New Zealand data are available only for the last 20 years. 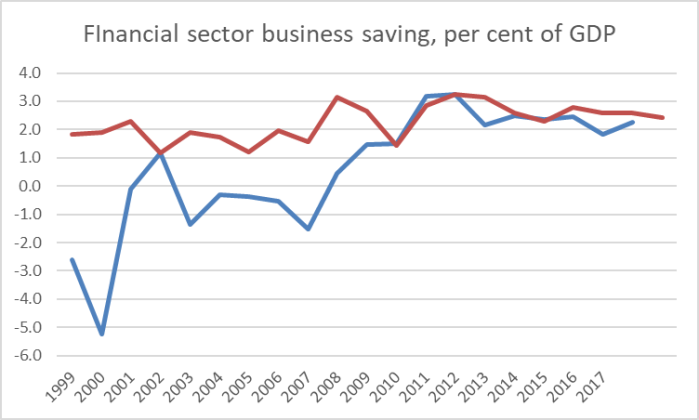 and here is the non-financial business sector 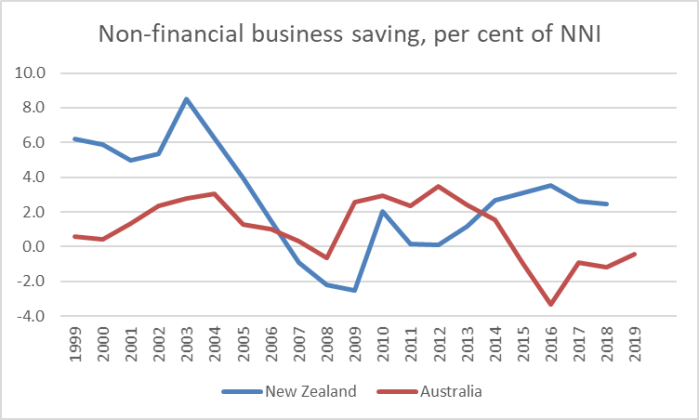 I just don’t know what to make of the earlier years: why would NZ financial sector saving (retained earnings) be so much lower than that in Australia, at precisely the same time non-financial sector business saving was materially higher.  Something doesn’t look quite right (but perhaps it is, and I’d be happy to have any authoritative explanations).

More recently, this decade, the financial sector savings rates have been very similar on both sides of the Tasman: rather what one might expect given that the biggest players here (banks) are also big Australian banks.  But if that is plausible and roughly right, it leaves the business saving rate in the rest of the business sector quite a bit higher here than in Australia.   Which is interesting, and not necessarily what I would have guessed without checking.

I don’t purport to have any particular insights to offer on quite what has been going on.   Digging any deeper would probably require more resources and data that I don’t have.  But it is interesting that the relationship between New Zealand government savings and Australian government saving, and New Zealand and Australian household saving, have been pretty stable for a long time.  The puzzles seem to rest in the business sector data, and unfortunately business saving is quite routinely overlooked when people talk,or think, about saving behaviour in New Zealand.   A Treasury, Reserve Bank or Productivity Commission note might be able to shed more light on developments that we probably should understand better than (at very least) I do.