Each year, as a disillusioned voter (pondering being a non-voter, for the absence of credible options) I go to the effort of tracking down the conference speeches of the main party leaders.  What party leaders choose to emphasise, in one of their most-covered speeches of the year, can be telling.  As, of course, can what they choose to omit.  When Labour was in Opposition I never took very seriously talk (eg from Phil Twyford) about  fixing land use regulation and thus materially lowering the cost of housing because the leader never mentioned the issue, including in conference speeches (Jacinda Ardern still doesn’t, in conference speeches or elsewhere).  Of course, there are other speeches and interviews in the course of a year, but the conference speech isn’t just for geeks (see, eg Q&A interviews) or specialist audiences.  Things leaders care about, highlight, and spend reputational capital on tend to be things that get done.  Others things, not so much.

What, then, did Simon Bridges have to say in his conference speech on Sunday?  There was lots of rather sickly shtick –  his wonderful wife, his lively children etc.   And there was a rather strained attempt to suggest that somehow he’d overcome deprivation and disadvantage himself

(I struggle to take seriously that sort of line because “son of Baptist preacher and a teacher” exactly describes me –  our fathers were ministers in suburban Auckland at the same time –  and I’ve never once felt any disadvantage.)

Perhaps he has conveniently forgotten that one of his recent predecessors –  Don Brash –  was the son of a Presbyterian “preacher” and of a mother who left school before high school, or that the first National Party Prime Minister was the grandson of a Yorkshire farm labourer. Or, frankly, that as far as I can see not a single Labour or National Prime Minister has come from any economically-privileged background.  Perhaps there are people in politics born with the silver spoon in their mouth –  the National Party president most notably at present – but that hasn’t been the background of any modern Prime Minister (or major party leader).

There are even some things in the speech that did resonate with me, including many of his criticisms of the current government.  But the centrepiece was, of course, cancer care.  I don’t have a view on the substantive merits of the specific initiative National is proposing, which looks like smart tactical politics, but perhaps rather small beer.   I’m inclined to think health is underfunded (there is a chart and some thoughts in this pre-election post, and the Budget estimate of health spending of 6.1 per cent of GDP this year is pretty much in line with what Labour was envisaging then) even on the basis of our current economic performance) but that wasn’t really his case.

But, for all the almost ritualised mentions in Simon Bridges’s speech of the importance of a strong economy (even the Prime Minister mouths those sorts of line from time to time), there was nothing –  not a word –  to suggest that he recognises that the biggest obstacle to higher material living standards (whether in the form of cancer care or other public or private goods and services) is the woeful productivity record that successive governments –  led only by National and Labour –  have presided over.    There is plenty of talk about cyclical issues, but nothing about the structural failures, and nothing about what National might do that would conceivably make a real difference in reversing that performance.

Sure, it wasn’t primarily a speech about economics, but there has been nothing from Bridges or his colleagues elsewhere, and no hint of a recognition here, that much-improved productivity performance is the only sustainable path to much better material living standards.  And not a hint of a recognition that these failures were already well apparent in the government in which he served (latterly as Minister of Economic Development) –  and if you think politicians never make such acknowledgements then (and in fairness to Bridges) I should point out that in his brief speech at the start of the conference he did acknowledge that National hadn’t done that well on housing (“but we weren’t Phil Twyford”).

What do I have in mind.  Well, of course, there is the shrinking – sideways at best –  share of foreign trade (exports and imports) in GDP, even though successful economies –  ones catching up on the leaders – are almost always marked by a rising foreign trade share. 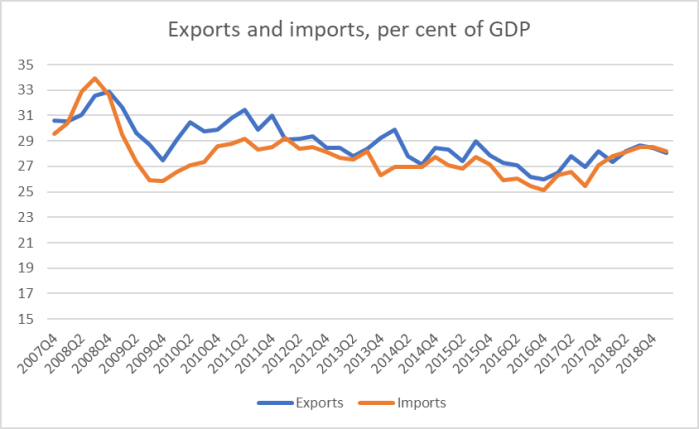 But the simplest starkest chart is the one showing labour productivity growth (or lack of it).

No labour productivity growth at all for four years now, and barely any for seven or eight (perhaps 1 per cent total growth since 2011/12).     Mediocre or worse as I think the current government is, these failures –  stark even in international comparison (and this isn’t a great decade for global productivity growth) didn’t start with Ardern and Robertson.   Now, sure, National people like to quote growth in per capita GDP but (a) even that was much lower over National’s term than in the previous nine years (lower again now) and (b) to the extent it was respectable for several years this decade, that mostly had to do with reabsorbing workers displaced in the last recession (the unemployment rate falling from about 6.5 per cent to about 4.7 per cent when National left office).  To repeat, as the chart illustrates, there has been barely any productivity growth, and although the unemployment rate probably should be pushed lower (see Reserve Bank underperformance), it is only productivity growth that will underpin sustained growth in material living standards.

National is promising a discussion document on economic policy later in the year.  I’ll look forward to that, and will study it carefully, but at present there is nothing in what they are saying –  and nothing in the Bridges speech –  suggesting that they really envisage anything different from what they did in the previous nine years, the period in which the structural economic indicators languished, even as a pretty muted cyclical recovery was playing itself out.     Some of the specifics Bridges mentions may even make some sense, but (individually or collectively) they aren’t the stuff of a transformational lift in economic performance, of the sort New Zealand –  including our ability to fund cancer treatments –  really needs.  It isn’t clear National has such a vision, let alone any real ideas about how to bring such a transformation about.

Sadly, of course, that does not mark them out from the current government, where we regularly hear about building a more “productive and sustainable” economy, but see nothing specific that might make a credible and useful substantial difference.

13 thoughts on “Where there is no vision”