There does seem to be a growing sense among far too many public agencies that laws don’t really apply to them, only to other people.    This is particular so in respect of the Official Information Act.

A government department, which can't answer an OIA in 20 working days, seeks an extension, misses the next due date – and when I ask what happened – says sorry for the inconvenience and it'll get back to me "when it can" #fixtheOIA pic.twitter.com/EComc11F7K

In similar vein, I had an experience a couple of months back in which the Police simply ignored the statutory deadline (“no later than 20 working days”).  Since they were the Police – ideally, examplars of upholding the law –  I lodged a complaint with the Ombudsman.  The Ombudsman actually dealt with the complaint reasonably promptly and I had a letter from them basically saying “we pointed this out to the Police, who accepted that they had missed the deadline”,  and “and now there is nothing more we can do”.  There are no sanctions in the Act, and not even the pretence of an apology from Police.

The Ombudsman also dealt reasonably promptly with a similar complaint about the Reserve Bank.    They had delayed and slow-walked (using the formal extension provisions in the OIA) the release of material supporting their position on the bank capital proposals –  material which, when finally released, turned out to be quite limited, and which had been given to other members of the public long before.     The extension looked to have been pure delaying tactics, deliberately obstructive, and so I complained to the Ombudsman.  And, much to my surprise, I had a letter earlier this week from a new Assistant Governor at the Bank

That was a first.

Sadly, it doesn’t seem to be a marker of a genuine change of approach, just that they are a bit more bothered (than Police, say) of falling foul of the Ombudsman.  They tend to delay until the Ombudsman belatedly determines there is a problem, and then suddenly play nice.

In late March, the Minister of Finance announced the appointment of the members of the new Monetary Policy Committee. On 29 March (three months ago tomorrow) I lodged Official Information Act requests with the Minister of Finance and with the Reserve Bank Board (responsible for determining the names the Minister could accept or reject).   Given that, on paper at least, this was a powerful new body, it seemed not unreasonable to ask questions, including about any back channels through which (say) the Minister might have sought to get his preferred people onto the Board’s list (in most countries, the Minister of Finance can simply appoint directly the people conducting monetary policy).

Both the Minister and the Board initially extended my request.  I didn’t have much problem with that (plausibly there was quite a bit of paperwork to sift through etc) and the issue wasn’t overly urgent.   The Minister of Finance complied with the law and released a set of papers to me a few weeks ago.

Not so the Board (or the Bank handling the processing for them).  They initially extended my request to the same date as the Minister had done.  That didn’t seem unreasonable, even if the delay was quite long, and I’d envisaged there might need to be consultation between the two offices.  But deadline day arrived.  The Minister responded, and sent the requested material.  But the Reserve Bank Board (staff on their behalf) sent me an email saying they were further extending the deadline to 26 June (Wednesday this week)

And so time passed. I fully expected a response on Wednesday –  it was, after all, almost three months they’d had by then.  But midnight came and went and there was nothing.

And so, having had that nice letter from the Bank’s Assistant Governor early in week, I sent her an email yesterday morning, reminding her that the extended deadline, set by the Bank itself, had passed.  I ended

I hope this further delay is pure oversight and that I will have a response very very shortly.

But no.  I didn’t actually get a reply to that email, but it clearly sparked action because much later in the day I had an email from someone down the line.

Well, that’s nice isn’t it.  Not even a new deadline, just an indication.

So this is the third extension on a single request.  The first was made (well) within the orginal 20 days, the second was made on the final day of the extended period, and the third quasi-extension, well it came after the second deadline had already expired, and it looks as if it might not have made at all if I hadn’t approached the Assistant Governor.

But there is this thing called the law, under which agencies are required to operate. It is not voluntary, or just a nice idea, it is the law.   And here is what the Ombudsman’s office has to say about agencies extending request (the document is their guidance to government agencies on handling OIA requests).

Nothing in the OIA prevents multiple extensions being made, providing any extensions are made within the original 20 working day time period after receiving the request. For example, if an agency notifies the requester of a one week extension, and then later realises that a two week extension is actually necessary, a second extension may be notified as long as the original 20 working day time period has not yet passed.

You simply can’t extend a request again once the initial 20 day period has passed (in this case, that date would have been in late April).  That isn’t my reading of the Act, my opinion, it is the determination of the Ombudsman, who is responsible for enforcing the Official Information Act and holding agencies to account.  As it happens, the State Services Commission has also issued OIA guidance to agencies, and their text on extensions repeats the Ombudsman’s stance, without question or challenge.

Perhaps the Reserve Bank’s lawyers have a different interpretation (untested in the courts, the only way the Ombudsman’s view could be overturned). Or perhaps the Bank just doesn’t care.  Laws are for other people.

The Ombudsman even offers some suggestions for agencies (I guess unexpected obstacles do come up from time to time).  It is commonsense really, the sort of thing any decent public-spirited person would want to do anyway (but not apparently the Bank).

If it looks like it will not be possible to meet either the original or an extended maximum time limit, the agency should consider contacting the requester to let them know the current state of play and reasons for the delay. Requesters will appreciate being kept informed, and may be more understanding if the agency ends up in breach of the timeframe requirements.

Agencies should be aware, however, that a failure to comply with a time limit may be the subject of a complaint to the Ombudsman.

And so, in the spirit of sweating the small stuff –  how are public agencies to be held to account if we don’t make a fuss and use the avenues that are open to us? – but with a somewhat heavy heart (couldn’t they just obey the law instead?), I will be lodging another complaint with the Ombudsman later this morning.

The request was made to the Board of the Reserve Bank.  They don’t work for the Governor or the staff, rather the staff provides secretarial and adminstrative support to the Board.  Neil Quigley, vice-chancellor of Waikato University, is chair of the Board, and he and the Governor between them need to take responsibility for this lawless obstructionism.  “Culture and conduct” is one of the Bank’s trendy mantras.  It really needs to start close to home.

UPDATE: The Governor recently told an acquaintance of mine that he doesn’t read this blog, but clearly someone at the Bank does.  I finished the post, went off to clean the house, and came back to find this. 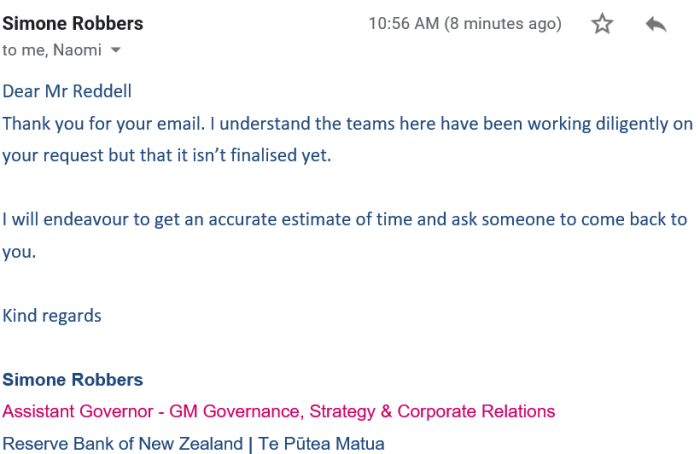 Again, that’s nice, and slightly better than nothing.  But, the law…….  As the law is written, and applied by the Ombudsman, the response was finally due on 11 June.