One of the great things about growing kids is the questions they ask.  Yesterday afternoon as we were talking about various countries’ economic performances my 15 year old, who is doing year 12 economics and is intensely interested in international affairs (and knows to distinguish between GDP and per capita GDP), asked me if I thought Russia could ever be the richest country in the world (per capita was what he meant).

I’d never thought about it before. On five seconds of thought, my answer was along the lines that I couldn’t see why not, in principle.  No single country or even region has had a monopoly, over the centuries, on the status of being richest and most advanced.  And, for what it is worth, Russia has abundant natural resources, had a strong tradition of maths and science, and as a cold country it is one of those where modelling suggests that global warming may well be economically beneficial.

But it prompted me to go and look at some data.  From the latest IMF World Economic Outlook tables.  Here is where Russia currently sits in terms of GDP per capita.

Of all the countries and territories in the IMF database, Russia sits just outside the upper quartile.  But the group of countries it sits among is substantially made up of EU and/or OECD countries (Estonia, Portugal, Poland, Hungary, Greece, Latvia, Turkey, Croatia, Romania and Chile).   Economists often think of Chile as some sort of poster-child of good economic management, and I’ve been intrigued by Uruguay’s strong performance in the last couple of decades, but both are still materially poorer than Russia.   And Russia –  70 years of Communist rule, a deeply destructive war, rarely any stable sense of property rights or the rule of law, and a raft of sanctions in more recent years sits at about 75 per cent of the average per capita income of New Zealand.   100 years ago, on the eve of World War One, the end of the first great age of globalisation, (the Maddison database records that) Russia had GDP per capita not half that of Argentina, Chile, or Uruguay, and about 30 per cent of that of New Zealand, Australia, Canada, the US, and the UK.

The Russian story is flattered to some extent by fairly long working hours (average annual working hours per worker are about 10 per cent higher than those in New Zealand) and by a shorter life expectancy (even than much poorer China).  But here is a similar chart for labour productivity (real GDP per hour worked) from the Conference Board database. 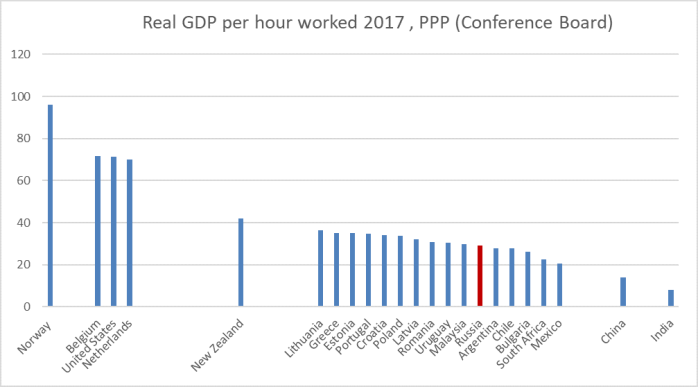 Russia sits slightly further down the rankings, but (broadly speaking) among the same group of countries.

To the extent geography matters, Russia has more neighbouring countries than any country in the world and its economic outcomes look better than most of the neighbours (North Korea at one extreme and Norway at the other).  And if one compares Russia’s GDP per capita with that of either Western Europe (source and origin of the Industrial Revolution) or with the Anglo offshoot countries (US, Canada, Australia and New Zealand), which once led the world league tables, Russia’s relative performance now seems to be at least as good –  probably better –  than at any time in the last few hundred years.  It is hardly a stellar economic performer but –  against all the (mostly self-imposed) obstacles – the last century has been one of continued catch-up and convergence.

Of course, the bigger story is probably one of missed opportunities.  Look, by contrast, at what Singapore, Taiwan, and South Korea have managed –  even Malaysia, now appearing on both those charts above –  and it leaves open the possibility of what Russia might have been, perhaps (but probably not) might still be.