Skip to content
HomeLooking at the regional GDP numbers

Under this government money from the Provincial Growth Fund has been being flung round like confetti (this was last week’s example), with very little sign of any rigorous evaluation.  It isn’t clear to me whether things are worse under this government than they were before (recall the 13 bridges Simon Bridges was promising in Northland as Minister of Transport, to try to win a by-election) or whether this lot are just “better”
at the branding.   “Regional development” –  with no disciplined sense of what actually shapes economic performance – has certainly been a cause dear to the heart of all recent governments (and their MBIE bureaucrats).

SNZ yesterday released the annual regional GDP numbers.   As ever, these  numbers aren’t perfect –  nominal not real, and prone to revisions for several years –  but they are lot better than nothing, which is what we had until almost 20 years ago.

The regional GDP data have been available since the year to March 2000.  Over the period since then, three of those five regions have had faster growth in per capita GDP than the national average (and by very substantial margins in Northland and the West Coast).  All five have recorded faster growth than Auckland and Wellington.  And if one goes back to 2000, one of the poorest five regions then was the Bay of Plenty, but it has recorded such fast (per capita) growth since 2000 that it has overtaken not just Hawke’s Bay but also Tasman-Nelson.

The picture is a bit less positive if one takes just the last decade, but even over that period growth in per capita incomes is estimated to have been stronger in Hawke’s Bay and Gisborne than in the country as a whole.

As a matter of interest, I also had a look at the unemployment data.  The regional data from the HLFS arem’t reported for the same groupings as the regional GDP data, but here is one chart I constructed.

Even at its worst this decade, the gap between the two lines wasn’t as large as it was 20 years ago.  Last year, it was almost as low as it has ever been.  Involuntary unemployment is a blight on lives wherever it is found, but these particular regions don’t seem to have been doing too badly.

Meanwhile, any guesses as to which regions had the slowest growth in average GDP per capita over the entire period from 2000 to 2018?

Wellington was worst, followed by Auckland as second-worst.

The two regions combined have recorded a material increase in their share of national population, and yet their share of total GDP is unchanged (actually down very marginally).

What about Auckland alone?  If the picture is less dramatic than for Wellington, Auckland matters much more, due to sheer size (and population growth, actual and projected) Here is the latest version of a chart I’ve shown in previous years. 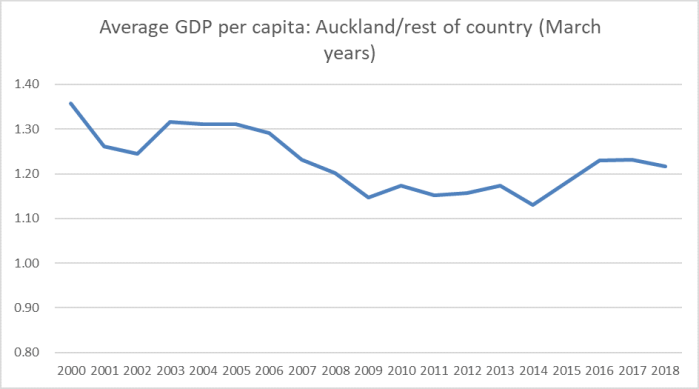 It certainly isn’t monotonic.  There are reasonably good phases (which look to coincide with building booms in Auckland) and really bad ones, but there is no sign of the longer-term trend reversing.   An even-greater share of the population is in Auckland, and average output per person in Auckland is growing more slowly than in most of the rest of the country.  In high-performing economies –  at least those relying on something other than really abundant mineral resources –  the picture is typically the other way round.  Big city GDP per capita is typically much higher than in the rest of the country, and in most cases that margin is widening.  But not in Auckland.

Any why is Auckland’s population growing so rapidly when its economic performance has been unimpressive (to say the least).  That’s down to immigration policy.  That isn’t really a debateable point: the data show that (net) New Zealanders have been moving away from Auckland.  This chart was taken from a Treasury working paper I wrote about last year.

Our large-scale non-citizen immigration policy –  with targets not exceeded in per capita terms in any other OECD country –  is a practical centrepiece of the economic strategy of successive New Zealand governments.   You don’t hear the phrase now, but it is only a few years ago that MBIE openly talked of the policy as a “critical economic enabler“.  With the best will in the world no doubt, “critical economic disabler” would be a fairer description of the role immigration has played for decades (probably going back all the way to the post World War Two period).  It isn’t the fault of the immigrants –  simply looking for the best for themselves and their families –  but of successive governments and their officials.  They are particularly culpable as the evidence has mounted that their strategy simply is not producing the desired economic results.

The story in Wellington is different of course, but probably no less telling.  Here, local government likes to talk up the idea of a city built on high tech industries.   Central government likes that talk, and also throws (lots of) money at the film industry.    The information in the regional GDP tables doesn’t give a full picture, but there is a line for the component of GDP labelled “Information, media and telecommunications and other services”.  Here is the share of that sector in Wellington’s GDP. 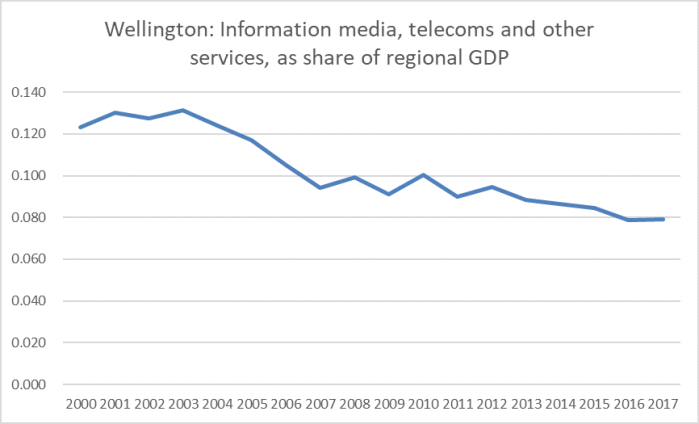 Even in Auckland, the share of that sector has been falling –  so there may be something structural around, say, the falling real price of telecommunications going on  –  but nothing like as steep as that fall in Wellington.

New Zealand does macro policy reasonably well –  fiscal policy and (for all my various criticisms at the margin) monetary policy – but our structural policies are set for failure, and in delivering continued underperformance, are doing just that.    The immigration policies pursued by successive governments simply take no account of either our experience (70 years of ongoing relative decline) or our most unpropitious location.   If –  as I noted yesterday –  this is a bad place for basing outward-oriented business (and revealed preference suggests that is so), it is a bad place for governments to engage in “population planning”, importing large numbers of people.  One of the fastest population growth rates in the OECD combined with one of the poorest economic performances should be telling anyone with ears to hear (not our politicians) something important.  The specific relative failure of Auckland just makes that message more stark.

21 thoughts on “Looking at the regional GDP numbers”