There was a story on Stuff yesterday (in the Domininion-Post this morning) about Air New Zealand’s “generous provision” of free airfares to the New Zealand China Council.  The China Council, you will recall, is the largely taxpayer-funded propaganda body set up by the previous government to champion good and quiescent relationships with the party-State in Beijing, the People’s Republic of China.  “Good” relations with the PRC, of course, means never ever saying or doing anything they don’t like.  Friendships aren’t like that.

Air New Zealand’s funding for the China Council bothers me no more or less than the mindset that governs the whole relationship with the PRC, whether among officials, politicians, or business leaders (and if there are any exceptions, they keeep very very quiet).  It seems that, pure and simple, it is all about the money – whether trade deals, sales in the PRC, or the flow of political donations.  If Air New Zealand wants to fly to the PRC, it needs to keep sweet with the regime, and needs to keep the New Zealand government (and public) on the straight and narrow, not making difficulties for them, as far as possible.  If the China Council can help them do that, why wouldn’t they –  having decided to sup with the devil – provide support for those who can help their cause.  It isn’t done out of the goodness of their heart, but out of pretty cold commercial calculation.   And since the taxpayer has already been coerced to cover much of the China Council’s activities, it is probably pretty cheap PR expenditure.   Whether Air New Zealand is majority state-owned (as it is) or not isn’t really relevant.

I don’t suppose most people associated with the China Council really see themselves as getting involved to serve Beijing’s interests (there might be exceptions –  individuals on the Advisory Board with close ties to the regime, including its United Front organisations, and individuals on the Executive Board –  including our former Ambassador to the PRC and our former Prime Minister – who hold positions in regime bodies).  Probably most of them think of themselves as serving “New Zealand’s interests”, but people have a funny way of interpreting their own personal (or business) financial interests as being much the same thing as the “national interest”; perhaps the more so, more money is involved.  But whatever story they tell themselves, they nonetheless objectively do serve the PRC regime’s interests.  That is the effect of their involvement, their choices, their silence.

When you walk by evil every day, when your organisation exists to minimise and distract from evil, when you are indifferent to the values of New Zealanders, and the abuse of those values in the PRC, you serve the regime’s end.  It is as simple as that.  And for a regime that is among the most evil on the planet today –  certainly the most of evil of those who in any material way impinge on New Zealand.  Air New Zealand is part of that.  So are Don McKinnon, Jenny Shipley, Tony Browne, Grant Guilford, Cathy Quinn and the rest of them (including their hired gun and front person Stephen Jacobi).

I’m an economist by training, so I’m quite happy to sign up to the notion that trade is generally mutually beneficial for those directly participating.  But each of us, actively or passively, makes moral choices about those with whom we deal.   Big companies and their bosses, even more than individual citizens, have real and effective choices.  Those who associate themselves with a tawdry body like the China Council reveal the nature of their choices, of their values.

It is not as if the China Council exists to encourage real and open debate about the PRC and how New Zealand should engage with, respond to, and deal with it.   Such a body might, arguably, be a useful thing for taxpayers’ money to be spent on.   After all, it is a big country, and that sort of debate doesn’t even exist to any serious extent in our universities –  keen on their PRC students, (several) keen on the (PRC) Confucius Institutes, and where the Contemporary China Research Centre is chaired by someone who helps promote the regime agenda through the Confucius Institute movement.

But that isn’t the China Council.  The China Council is about keeping the (New Zealand) peasants in line and pandering to the regime in Beijing – that gala dinner, for example, for the new Ambassador.   To make out that the PRC is a normal, honourable and decent regime.

Where’s the evidence?   All around really.  Reports (pretty lightweight ones) championing one of the regime’s key geo-strategic initiative (the Belt and Road), public statements defending Huawei (and never any examination of the other side of that story), the constant attempts to trivialise –  or tar as racist or “xenophobic” –  any serious debate about the PRC and New Zealand.  This, as a reminder, was from their Annual Report last year

An, at times, unedifying debate about the extent of foreign influence in New Zealand risks unfairly targeting New Zealanders of Chinese descent

If the private sector was stumping up all the funding for this lobbying and propaganda effort, we might just call it freedom of expression I suppose.  If you choose to sell your soul, then (within limits) I guess you can champion your cause.   As it is, taxpayers’ money –  and the choices of successive New Zealand governments –  is being used to serve the personal interests of these businesses, and of the political parties concerned.   I’m not suggesting private or public companies should be banned from doing business in the PRC, but they should be told much more than is common anywhere that they are on their own.  Dine with the devil if you must, be take a long spoon, and don’t be asking for support from the rest of New Zealand.   But we’d be better off as a country –  have rather greater moral clarity –  if there was less business undertaken with the PRC, given the nature of the regime.  There might be a modest economic cost –  but it would be modest – but let’s be grateful that business interests weren’t allowed to distract us from eventually standing up and taking on the Nazi regime 80 years ago.  The parallels with the PRC today are almost too numerous to list.

But, of course, it isn’t just businesses that have sold their souls.  Successive governments and political parties are at it too –  recall those National and Labour party presidents off in China praising the regime.  This one seems to be no different in substance.

Yesterday a local Labour Party supporter dropped into my letterbox a Labour brochure headed “Our plan for New Zealand”, replete with photos of the Prime Minister.  I might write about the (lack of) economic substance in another post, but what caught my eye was this page. 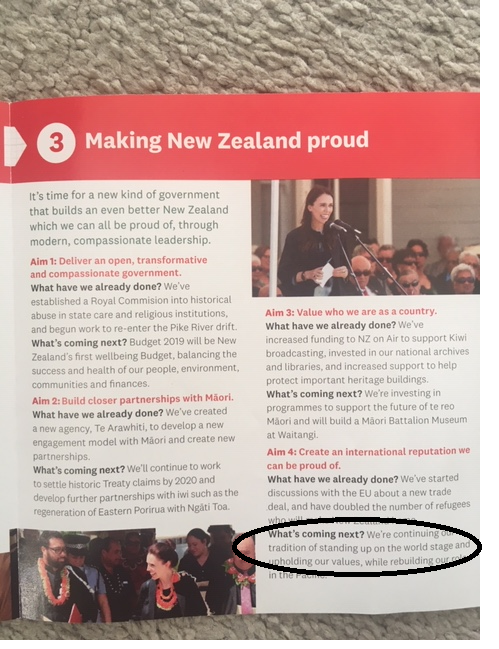 The Prime Minister promises to “make New Zealand proud”.  How?  “By continuing our tradition of standing up on the world stage and upholding our values”.

She probably isn’t any worse than the other lot (Todd McClay and the “vocational training centres” that are really no concern of ours), although her approach is made all the more nauseating by the pretence to representing something better –  all that talk of kindness, empathy, values, and so on.   The best test of a person’s values is how they choose to act.  Evidence to date is that our Prime Minister shares much the same “values” as the China Council –  don’t rock the boat, never stand for anything other than commercial interests (and party donations).  What you won’t pay a price for is in no serious sense a “value”.

I read this morning an article from the Italian site Bitter Winter.   Perhaps I could commend an article like this to the Prime Minister and to Mr Jacobi (or to Simon Bridges, Christopher Luxon, Don McKinnon, Tony Browne, Jenny Shipley, Jian Yang, Raymond Huo and the others).

One Christian who was previously assigned to work in a brick kiln described his working environment. “The brick kiln’s temperature can reach 60 or 70 degrees Celsius (about 140-160 degrees Fahrenheit). If prisoners are careless, they will be scalded, and their hair will be scorched. The prison authorities do not provide temperature-resistant shoes. Prisoners must stand on one foot, shifting from the left to the right. If someone spends too long on one foot, he will get burned and develop blisters. New prisoners couldn’t even last for five seconds before having to run out of the kiln. But whenever the manager saw someone running out, he would flog them with a pipe.”

Heavy labor made this Christian think about death. One time, after he tried to commit suicide, the team leader disciplined him by beating him and shocking him with an electric baton.

The living conditions in prisons are deplorable. Prisoners often eat vegetable-leaf soup with insects floating in it. As a result of malnutrition, they often feel dizzy and do not have the strength to work.

To ensure that prisoners complete their work even when physically exhausted, the prison authorities resort to torture.

The interviewees report that prison guards incite the more vicious prisoners to discipline other inmates. Thus, it is common to be beaten by “prison bullies” when someone fails to complete the task. Mr. Zhu told Bitter Winter, “If a prisoner cannot complete their task, the prison guards will tie the prisoner’s hands and feet to an iron fence, and they are forced to stand continuously except during meals. Whether in winter or summer, they remain continually tied up for three or four days and aren’t allowed to sleep.” In order to avoid corporal punishment, Mr. Zhu had to work hard to complete his production task.

I don’t suppose any of those people would be comfortable reading this sort of stuff (perhaps Jian Yang would be different –  he actually worked for the regime for years) but squirming slightly uncomfortably as you read it means nothing if you don’t –  when you can – do or say something.  There are plenty of areas in which I disagree with much of the consensus opinion of those who hold power in New Zealand, but what really upsets me about the PRC issue is the utter practical indifference to stuff these people all individually and privately know and agree is evil; stuff they’d not even considering supporting here.  And yet each of them choose –  by their actions and their passivity –  to give cover to such evil, on large scale and small.   They compromise themselves –  and they take our money to do it.

One day, I guess, they’ll be judged before the bar of history –  as the appeasers of the 1930s, the fellow-travellers with the Soviet Union were – but in the meantime I guess they’ll keep the dollars (deals and donations) flowing.  And evil will prosper just a little more because of choices those people make.