Skip to content
HomeSquirming and hoping the issue goes away

The Prime Minister was briefly put under the spotlight on Radio New Zealand this morning on the narrow issue of her reaction to the open letter regarding the Anne-Marie Brady/PRC situation.   The Radio New Zealand story reports that

The prime minister said at her weekly post-Cabinet press conference on Monday that she would not be making any moves to condemn China, despite rising concern from academics about the country’s attempts to suppress talk of its interference in domestic politics.

And in her interview this morning she was at pains to minimise and play down the issue, on the defensive, and playing red herrings

“As much as I support academic freedom, I also have to be careful how much I’m seen to interfere in the police as well…

Had anyone suggested she interfere in the Police?

If you took her responses line by line, each line might have seemed reasonable on its own.  But what it added up to was the sound of someone who (a) desperately wanted the issue to go away, and (b) was not interested at all in providing a clarion call for freedom from fear, whether for Professor Brady and her family, or those members of ethnic Chinese community in New Zealand who report harrassment and threats (including to family in China) from Beijing’s agents if they dare to exercise rights –  to speak up and speak out –  in New Zealand.  She seemed totally unbothered that an investigation, which she tried to imply was being conducted solely by something like the Riccarton suburban police station, was still going on after nine months.  Maybe it really is, but as Professor Brady notes

But Prof Brady said she had been told her case was closed.

“The discussions I’ve had with police make it clear that they’ve done everything they can, and I think that they would be ready to make a report to the government.”

She said this was a case for the national security teams at the highest levels, and not just a police matter because it was “not an ordinary burglary”.

The Prime Minister gives every sense that she wishes the whole situation would go away. Perhaps she doesn’t.  Perhaps she really cares about the freedom of New Zealanders. But it wasn’t the impression she was giving.  It came across as it might if the Prime Minister were more concerned about the interests of a few big businesses (public and private) selling to China, and perhaps the flow of political donations (presumably greater now she is in office).   Only she can really allay that impression, if in fact it is false.

From my perspective, one of the sad aspects of this affair is that people sticking up for Professor Brady seem to have been almost entirely from the left (I don’t know most of the people on the open letter list, but I’m guessing there aren’t many people not of the left on the faculty of the AUT school of social sciences and public policy (from whence many of the signatories come)).  But what is interesting is that much of the pushback also seems to come from the left. I’ve seen some particularly nasty comments in the comments sections of, for example, the left-wing The Standard blog.

And this morning one of the more respected figures of the left, Chris Trotter, is out with a full-blown attack, (“The Case of the Problematic Professor), having a go at Professor Brady and suggesting that all that should guide government policy on these matters is some narrow economic perspective –  what is good for Fonterra, or Red Stag, or Auckland University is good for New Zealand.  It almost deserves a post of its own, but just (relatively) briefly some comments.

He writes that annoying “China, on the other hand, can be extremely injurious to this nation’s economic health”.    Well, no, actually not.  Should the government of the People’s Republic ever decide to attempt to “punish” New Zealand they could create some short-term damage, and perhaps even some serious damage in individual sectors, but our total exports to China are about 5 per cent of GDP, and we have tools like monetary and fiscal policy to stabilise the economy in face of shocks.  China doesn’t make us rich (or, actually, as underperforming as we are), we do.  And do we have any self-respect or not?

Weirdly, for someone who is part of the Free Speech Coalition, Trotter seems to suggest universities should be pretty hesistant about criticising China.

Prattling on about being the “critic and conscience” of society is all very well, but when New Zealand’s universities are so dependent on the continuing inflow of international students, is it really all that wise to antagonise one of the largest contributors to this country’s educational export trade? It would be interesting to see how the nation’s vice-chancellors would react if equivalents of Anne-Marie Brady started popping up on their own campuses. Each academic activist launching equally uncompromising attacks against the Peoples Republic. How would all that criticising and conscientising affect their bottom-line I wonder?

Well, indeed, and the absence of the vice-chancellors from yesterday’s statement (or any other) was notable, but Trotter’s point argues for managing our universities differently, in a way that reduces our short-term vulnerability to thugs, not just pushing deeper into the market, and becoming more afraid of our own shadow, indifferent to those actually being intimidated.

Then Trotter repeats one of Murray McCully’s old lines –  no more true for being repeated from the left.

New Zealand lives by its agricultural exports – which is why the New Zealand-China Free Trade Agreement was so important when the Global Financial Crisis struck. Without it, this country would have had significantly less to come and go on. Chinese consumers saved us from the sort of vicious austerity measures that afflicted the people of the United Kingdom and Greece. The nature of the Chinese system has not changed since 2008.

The economics is simply wrong (I’ve pointed out in previous posts the similarities between the path of our economy and that of the US over the last decade) and what about that last sentence? Most observers will say China has changed markedly, and for the worse, under Xi Jinping, and at very least that the hopeful trajectory many in the West envisaged certainly hasn’t come to pass.

Then Trotter has a go at Brady herself

The good professor is not, however, above advancing a little soft power on her own account. Is it no more than a coincidence that she has been called upon to present her ideas to the Australian parliament during the “China Panic”? Or that her academic articles and speeches are followed closely, and receive considerable approbation, in Washington DC? That the name of Anne-Marie Brady started appearing in our news media at exactly the same moment as the rivalry between the USA and China ratcheted-up several notches – was that nothing more than serendipity?

Might not her appearance before the Australian parliamentary committee have something to do with (a) her expertise, and (b) a bipartisan Australian commitment to taking PRC influence activities seriously?  And as I understand it, her name became prominent here after she released her Magic Weapons conference paper –  not intended for publication until a later book came out –  after the FT/Newsroom (hardly agents of Trump) published the astonishing story last year on Jian Yang’s background.

Trotter writes in praise of the crass Donald Trump approach to Saudi Arabia, reflected in the appalling statement last week.  In Trotter’s description – which he appears to endorse – if that involved “turning a blind eye to cold-blooded, state-sanctioned murder, then so be it”.   If the Prime Minister really wants to line up with Donald Trump’s approach to foreign policy, perhaps she could at least come out and say so.  But, as a reminder, evil as the Khashoggi murder was, he wasn’t a US citizen.  Anne-Marie Brady and many of the intimidated in the ethnic Chinese community are New Zealand citizens.

Trotter concludes urging that the Prime Minister should stay silent, and that in so doing she will “earn the respect of Beijing and Washington alike”.  More likely, both would despise her, if for slightly different reasons.  More importantly, it would be the sort of stance –  prioritising a few big businesses over the interests and values of New Zealanders –  that eats away at any residual respect people have for the political process and our “leaders”.   Far better the words from Scott Morrison’s recent speech (as aspiration, if not always observed)

If we allow such an approach to compromise our beliefs, we let ourselves down, and we stop speaking with an Australian voice.

We are more than the sum of our deals. We are better than that.

As a reminder of just how compromised our university hierarchies are I found this graphic on the Auckland University website. 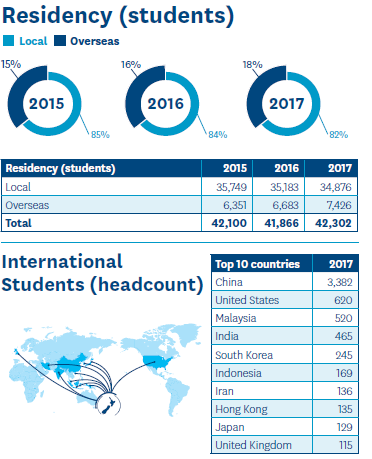 Not only is the dependency on foreign students rising, but the foreign student numbers are totally dominated by PRC students.    I’m usually very keen on free and open trade, but when you find yourself dealing with thugs, the sensible response (in almost any business or area of life) is to pull back and reduce your exposure to thugs, not to simply do the kowtow –  perhaps especially when you are a university, residue of some of greatest bits of the Western tradition.    We can’t allow our values, and the safety of our people, to be simply played around with to protect the interests of a few big (public and private) corporate businesses.   In Australia, a former Secretary of Foreign Affairs and Trade recently called for Australian universities to not act as if the revenue will always be there

“While demand remains high, it makes little sense for Australian universities to turn their back on the revenue stream offered by students from China and elsewhere,” he said. “But it would be wise to invest the profit margin for the longer term, not use it for current expenditure. Put it into a future fund or endowment, which would give universities a measure of resilience in the event that the market abruptly shifts for reasons beyond the control of universities.”

That would seem prudent here too, but of course it might force governments to look harder at the long-term financial structuring of our tertiary sector.

Finally, there was a story on some of these issues on Newsroom this morning, the key line in which is best captured in this tweet.

“China’s challenge to everybody in this region … is it requires governments are much smarter in dealing with a rising superpower that is aggressive, totalitarian, bullish and nasty in many ways, but also is varied and complex and interesting and engaging.”

Standing up to China, while still maintaining a working relationship, was difficult.

“It’s hard work and it’s constant work. This Government wants to do good but can’t quite manage to do so,” Barmé said.

“This is the real deal, and New Zealand’s never had to face this … You have to sit down and you have to work out, what is a consistent long-term policy, at least for the life of this Government. And how do you articulate that.

“And I get the sense they haven’t done that; Jacinda Ardern just runs for cover.”

She can’t even bring herself to talk, concernedly, about the astonishing situation in which a former PRC intelligence official, Chinese Communist Party member, sits in our Parliament –  close to the Embassy, never criticising the regime for anything –  having acknowledged that he misrepresented his past to get into the country in the first place.

I guess it suits the handful of big corporates and university bosses that she simply keeps quiet.  It should shame the rest of us.

28 thoughts on “Squirming and hoping the issue goes away”