Skip to content
HomeInterest rates: US and New Zealand

There is a bit of a story afoot that, somehow, the days of low interest rates are almost over.  There was even an editorial to that effect in the Herald yesterday, which seemed to hanker for higher interest rates here (without, for example, linking that preference to any good things –  much faster productivity growth –  that might make rather higher interest rates a welcome complement to greater economic success).

The idea that interest rates will soon be rising has been something of a constant (across much of the world) this decade.  Like the stopped clock, that line will no doubt eventually be proved correct.  But so far this decade, it seems to have been right (about policy rates) mostly when either:

The Federal Reserve has now raised its short-term interest rate target quite considerably.  Then again, the US 10 year bond rate –  3.16 per cent as I type – is barely above the levels it reached at the end of 2013, five years ago.   And here is a chart that decomposes a 10 year yield into two parts, and using a 5 year yield, calculates the implied second half of that 10 year bond: a five year implied rate in five years time.

That rate has edged up a little recently, but is still a long way below where it was five years ago.   Markets recognise that short rates have risen, but seem to have no greater confidence that they are going to stay very high for very long.

What about New Zealand?  Here is much the same chart for New Zealand, drawn from the data on the Reserve Bank website.

No sign of any rebound at all.    The series isn’t at its (2016) low but –  as has been the case all decade –  each peak is lower than the one before.  Five years ago when the markets and the Reserve Bank were convinced the OCR was going up a long way, this implied forward rate was in excess of 5 per cent.  Yesterday it was 3.27 per cent.

Both charts so far have been of nominal interest rates?  What about real, inflation-indexed yields?   The New Zealand government now has a variety of maturities on issue, and this is how the yields have performed since the start of 2014. 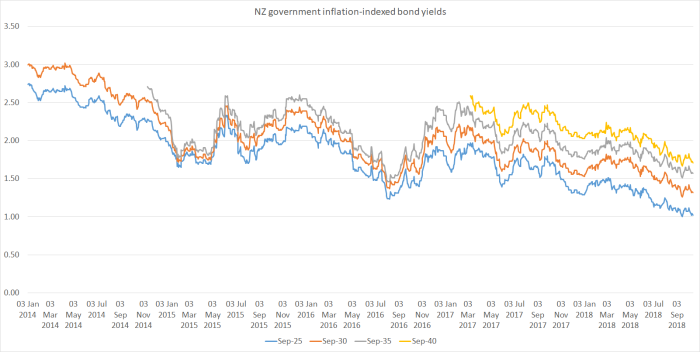 There is some volatility in the series, but the trend is pretty clearly downwards, even if one focuses just on the last 18 months or so.   With the passage of time each specific maturity has a shorter remaining time to run (in 2014 the 2025 maturity was an 11 year bond, and now it is just under a 7 year bond), but even adjusting for that the trend is still downwards.

The continued downward trend evident in the previous chart isn’t so clear in this one.  But there is no sign of any trend rise in real long-term New Zealand yields at all.   And if we take the very longest of these series –  the grey line, which represents and implied five year real rate roughly 20 years from now (and which thus shouldn’t be much influenced by very short-term expectations of the OCR or the state of the economy) the implied forward yield has dropped by around a full percentage point in little more than a year.  Those are big moves for a very long-term security.

What about the US?  Here is the yield on a US government 20 year inflation-indexed bond, calculated as a constant maturity (ie always 20 years ahead, not fixed maturity dates as in my first NZ indexed bond chart above).

And here is the implied yield on a 10 year US indexed bond 10 years ahead (using the 10 and 20 year constant maturity series). 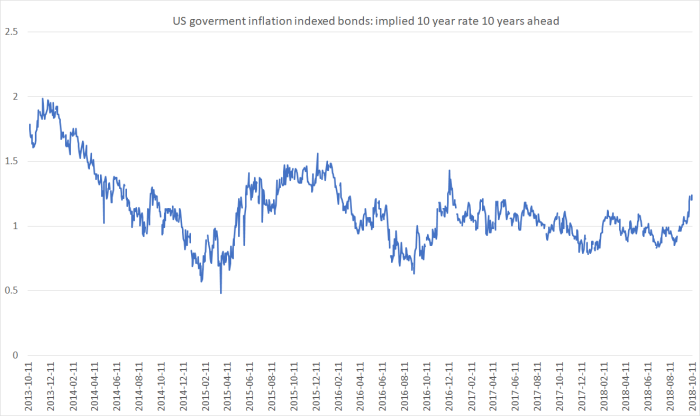 There is some sign of these very long-term implied US yields rising.  But even they aren’t setting new highs, or even surprising local highs of just the last few years.  Even with all that new government debt being taken on now, and projected into the future.

Perhaps the end of low interest rates really is nigh.  But there isn’t much sign of it in market prices at present –  none at all in New Zealand where, if anything, long-term and implied forward rates have just been keeping on falling.

Personally, my hunch is that yields (nominal and real) over the next decade could average lower –  not higher-  than those at present.   Mostly because when the next serious recession comes –  and there are plenty of things which could cause or compound it –  most advanced countries (and many emerging ones now) will have little capability, and perhaps even little willingness for some time, to do what it might take to get economies back on a firmer footing.   Look at how long it took last time round, even though going into that serious recession almost all countries had much more policy capacity –  and perhaps even political cohesion – at their disposal.

Later this morning, we’ll have the CPI data which may, at the margin, colour expectations about the near-term outlook.  But whatever those details, they want materially alter the picture of medium-term vulnerability, here and abroad.

3 thoughts on “Interest rates: US and New Zealand”