There has been some interesting material around recently on how many advanced economies (in particular) have undershot over the last decade or so the trends they appeared to be on previously.  Paul Krugman had an interesting column a couple of weeks back, and then the IMF had a whole chapter in their  latest World Economic Outlook on “The Global Economic Recovery 10 Years After The 2008 Financial Meltdown”.   Martin Wolf summarised and illustrated some of that chapter in his FT column last week.  Much of this work attempts to associate (causally) subsequent disappointing economic performance with the financial crises of 2008/09, something I’ve long been a little sceptical of.    The IMF also highlights that countries that didn’t have a financial crisis have shared in the underperformance.

I might come back to the IMF material (in particular) later but reading it prompted me to check out some New Zealand data.

As context, here is some OECD data for labour productivity (real GDP per hour worked) for the G7 countries as a group. 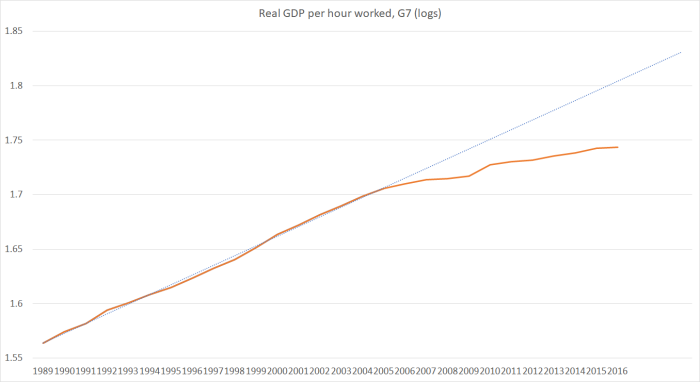 The trendline shows what might have happened if the trend growth to 2005 had continued.  The gap at the end of the period is equivalent to a productivity shortfall of around 15 per cent.    Note that this productivity slowdown was clearly underway well before the financial crises.

And here is the New Zealand data.  Here I’ve used quarterly data, all the way up to 2018q2.

But this time the trendline extrapolates the trend in the actual data up to early 2012.  Because up to about that time there was no particular sign of a change in the trend. (And thus between 2005 and 2012 we actually did a little better than the G7 as a whole).

Over the six years since 2012, the gap between the actual data and the trendline translates back to a shortfall of about 8 per cent.  Real GDP per hour worked now would be around 8 per cent higher than it actually is –  with all the attendant implications for wages, consumption possibilities, and even government revenue – if that pre-2012 trend had been sustained.  And the pre-2012 trend had been pretty weak –  mostly we’d still been falling behind the rest of the advanced world.

It is always possible that much of the recent productivity shortfall will be revised away –  SNZ have, over the years, delivered some significant changes in history at times.  But I’m not aware of any particular reason to expect significant revisions (in any particular direction), so we simply have to work with the data we have.

As the G7 countries didn’t have a financial crisis in 2005, we didn’t have one in 2012.  In fact, we hadn’t had a systemic financial crisis at all since the late 1980s, and the localised (severe in the sector, but small economywide) finance companies crisis had been centred back in 2007 and 2008.  For New Zealand, there simply isn’t a plausible story in which financial crises –  domestic or foreign –  can explain our dismal productivity performance over the last half decade or more.    Neither the timing, nor the stylised facts around the New Zealand financial system, fit.

I’m not sure I have a fully compelling explanation for why New Zealand has done so poorly since around 2012 (my standard story encompasses several decades of persistent gradual  –  cumulatively stark  – underperformance, and period since 2012 looks –  on current data –  to have been unusually bad).   Perhaps the earthquakes, and the subsequent diversion of resources to a lot of vital, but low productivity, repair and reconstruction work is part of the story (as we knew from day one, in economic terms it was a nasty non-tradables shock that wasn’t going to be helpful).  Then again, the peaks of that work are now well behind us, and productivity growth has yet shown signs of improving.  Perhaps the strong terms of trade have been part of the story –  not stimulating business investment, which has been persistently weak, but boosting incomes and perhaps crowding out other stuff.  The real exchange rate –  not an exogenous influence –  got back to pre-recession levels from about mid-2011.   And, of course, the very sharp and substantial turnaround in the net immigration numbers –  also mostly not an exogenous development –  was getting underway from later in 2012.

Whatever the full explanation, the symptoms (eg weak business investment, shrinking exports and imports as a share of GDP) should be worrying, the outcomes (productivity, and thus potential incomes) are dreadful –  building on earlier decades of underperformance –  and the explanation can’t credibly lie in financial crises, domestic or foreign.

And nothing serious is being done about addressing this failure, by the last government, by the present one.  And The Treasury –  principal adviser to the government on such matters –  seems much more interesting in its Living Standards Framework and esoteric (and sometimes convenient) concepts of “wellbeing” than in actually advising on remedying the New Zealand productivity failure.