The Westpac McDermott Miller consumer confidence survey results are out this morning.  To the extent they get any media coverage, no doubt the focus will be on the headline result.  Here is the summary chart. 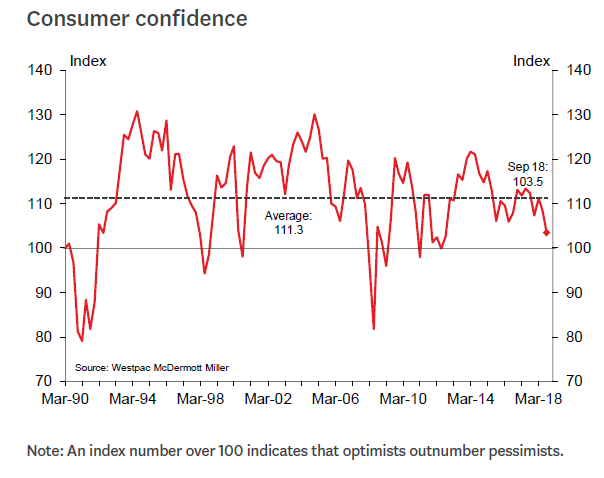 Consumer confidence fell sharply in September, taking it to its lowest in six years.

There probably isn’t much predictive value in these results for actual economic data, but I find the results interesting in their own right: how people generally are feeling about their economic fortunes and the economy more broadly.  After all, respondents aren’t just the “ideological enemies” of the government.

The Westpac results don’t seem out of line with the most recent Colmar-Brunton poll (taken six weeks ago) in which respondents are asked a single question.

“And do you think during the next 12 months the economy will be in a better state than at present, or in a worse state?”

The public no longer seem very optimistic at all.

But in some ways I was more interested in the longer-term trends in a couple of the sub-components of the Westpac index.   For example, 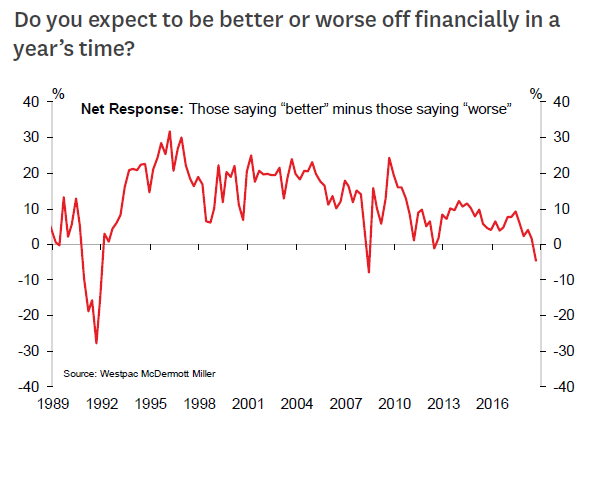 People are now less optimistic about improvements in their own personal position than at any time in the last 30 years outside periods when the economy was already in the midst of a recession (and materially lower than in the fairly shallow 1997/98 recession).  And look at the contrast between confidence levels from say 1994 to 2007 (across two different governments) and those now.  It looks a lot like a fairly steady trend decline.

And then there is the question about the longer-term prospects for the economy itself.  Respondents might not know much analytically about the issue, but their perceptions are interesting nonetheless.

The latest observation isn’t startlingly bad (and there was that sharp –  but brief – dip a couple of years ago) but look how diminished expectations are now (last three years or so) relative to the entire history of the series.  There are individual quarters that are weaker (though note, not in the 2008/09 or 1997/98 recessions) but in thirty years there has been no three year period where medium-term optimism has been weaker than over the last three years (under National and Labour governments).   And this pessimism isn’t tied to the last recession –  look how upbeat people briefly were in the couple of years after the recession ended.

(The medium-term picture is less bad in the ANZ’s consumer confidence survey, (which has a much shorter run of data) and it would interesting to know the precise question asked, to help understand that difference.)

Then again, in an economy that has managed very little labour productivity growth in the last five or six years, and none at all in the last three years, perhaps it shouldn’t surprise. 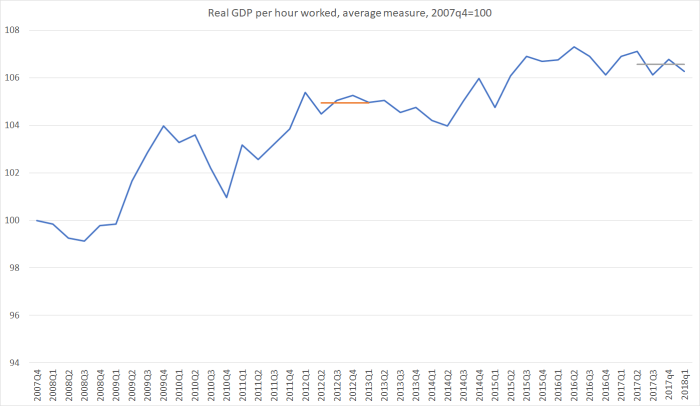 In an economy where the promises of economic reform decades ago came to little  (for younger readers, that is the then Minister of Finance back in 1989/90)

And where none of the political parties – especially not National or Labour that have led all our governments – seem to care much if at all, or have any serious proposals for turning around the continuing decades of underperformance, isn’t the public quite rational in being much less optimistic than they were?

A more interesting question is why they/we don’t find a way of demanding something better.

10 thoughts on “An age of diminished expectations?”