Last week, when I was tied up with other stuff, I heard a few media reports that a new Westpac survey was showing that public expectations of wage increases were slipping away.  At the time, I didn’t look at the details, but made a note to come back to it.

This was the key chart included in Westpac’s report of the survey results.

Introduced with this text:

Although workers may be feeling more confident about job opportunities, when it comes to the outlook for earnings, sentiment is really in the dumps. Increasing numbers of workers are telling us that they don’t expect any change in their earnings from work over the coming year. In fact, the number of workers who expect to receive a pay increase over the coming year is languishing at the sort of lows we saw during the financial crisis.

And while nominal wage growth has remained muted, consumer price inflation has picked up. After lingering below 1% for much of the past few years, consumer price
inflation is now running at 1.7% per annum. This means that the limited pay rises many workers have received have only just been keeping pace with changes in the cost of living. And for those workers who didn’t receive a pay rise (and even for some that did), their spending power may be going backwards.

I’m not doubting that respondents did answer the question the way Westpac reports. I wouldn’t even be surprised if the recent reversal of wage expectations was the real thing: there was all sorts of talk not long away about wage inflation being just about to “take off”, which so far hasn’t come to anything much.   But even with the recent reversal, expectations are still just back to around where they were for a fair part of 2015 and 2016.

My concern is more about how to interpret the longer-run of data in the chart and, in fact, how to make sense of wage data themselves.

For a start, surely respondents to this survey are inclined to bias their answers downwards?  After all, look at the results for the 2005 to 2007 period, when the labour market was unquestionably tight (including the fact that the unemployment rate was below 4 per cent), and general wage inflation –  on any of the measures –  was quite high.  And yet only around 50 per cent of respondents expected a wage increase.  Many more than that must have been achieving a wage increase.  As I’ve noted previously, the labour share of total income has actually been increasing in New Zealand.

Second, it is worth remembering that inflation expectations now are materially lower than they were a decade ago. 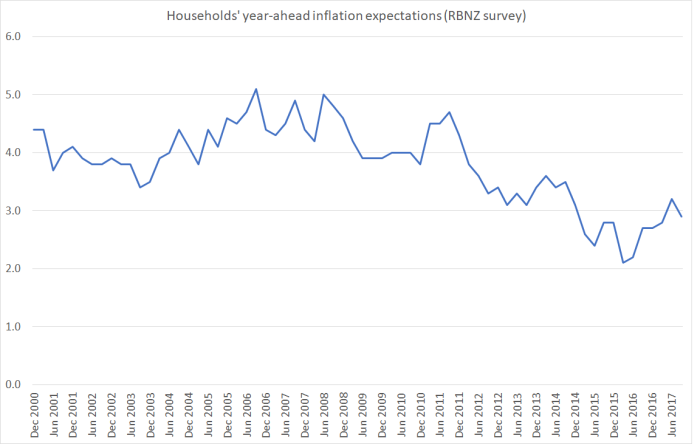 The numbers bounce around a bit, but at the end of the previous boom the average year-ahead expectation was around 4.5 per cent, whereas now it around 3 per cent.  (One shouldn’t put much weight on the absolute numbers, but the pattern is consistent with others surveys of inflation expectations.)   If inflation expectations have fallen materially, surely it is reasonable that fewer survey respondents will now be expecting nominal wage increases, even if everything else (labour market tightness, productivity growth or whatever) was unchanged?

Westpac also uses as a reference point a 1.7 per cent rise in annual wages.  That number appears to come from the LCI, a series that purports to adjust for what firms’ report were productivity changes.  It is better to use the “analytical unadjusted” measure from the LCI, which is closer to a stratified raw measure of wage increases –  which is, after all, more like what the respondents in the Westpac survey are being asked about.

Many commentator also focus on the even lower wage inflation numbers from the Quarterly Employment Survey (QES) –  a wage measure that is notoriously volatile (and not really representative of how anyone thinks the labour market is actually working).  It is quite prone to compositional changes, and thus doesn’t reflect – or really try to reflect –  an individual’s own experience in the labour market.

I’m not sure why people put so much weight on the QES measure of hourly wage inflation.  It has well-known problems (for these purposes) and is hugely volatile.   Here is a chart showing wage inflation for the private sector according to (a) the QES, and (b) the Labour Cost Index, analytical unadjusted series. 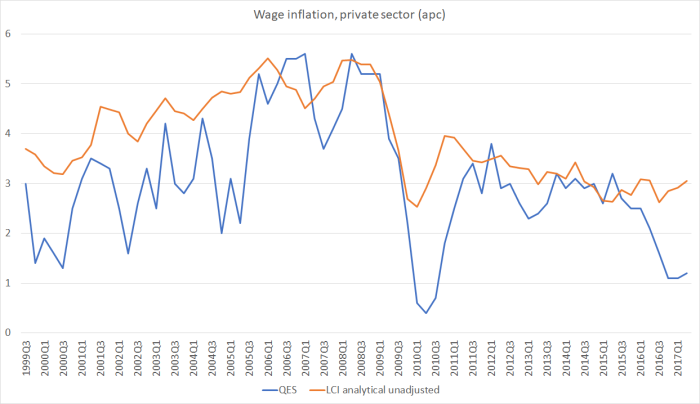 No economic analyst thinks wage inflation is anything like as volatile as the blue line –  in fact, wage stickiness, and persistence in wage-setting patterns is one of the features of modern market economies.

And here is the chart I ran last week, comparing real private sector wage inflation (the orange line above, adjusted for the sectoral core measure of CPI inflation) with productivity growth.

Real wage inflation now is lower than it was in the pre-2008 boom years, but it is running well ahead of productivity growth (however one lags or transforms it).

As I noted in that earlier post, real wage inflation in New Zealand has been surprisingly strong in recent years, given the complete absence of any (actual or trend) growth in labour productivity (real GDP per hour worked).  Of course, low inflation and low inflation expectations hold down the nominal rates of wage increases (relative to what we were experiencing a decade ago), but the real measures are largely what matter.   Real household purchasing power from labour income in New Zealand has been increasing –  from increased employment, but also from real wage increases that are more than it is likely that the economy can support in the longer-term.

Perhaps then people are right to expect more modest wage increases ahead.  But if so, it will likely be because the non-tradables led pseudo-boom of the last few years comes to an end, and market processes across the economy force an adjustment in wage-setting to something more consistent with our alarmingly poor productivity growth record (in this particular bad phase now five years and counting).

19 thoughts on “On wages: expectations and reality”