I wrote the other day about the role that population growth, including that accounted for by immigration policy, plays in influencing house prices, at least in places where regulatory restrictions on land use or construction impair the responsiveness of housing supply.  More demand, in the face of lagging supply, seems fairly ineluctably to put upward pressure on prices.

The latest QV house price data, for January 2017, also came out the other day. They produce data at an individual TLA level, which in conjunction with SNZ TLA population estimates, enables us to have a look at whether there has been a relationship (albeit crude and bivariate) between population growth and house price inflation.

In the chart below, I’ve focused on the period since 2007.  2007 was the peak of the last house price boom, and a period for which QV has supplied house price data for each TLA.  The population growth data is the percentage increase in population from June 2007 to June 2016 –  the most recent SNZ estimates.      It is worth remembering that in periods since the last census, population estimates are approximate at best, but these estimates are the best SNZ can do and they presumably use a consistent methodology across the country.

Given that we have pretty pervasive land-use restrictions, it isn’t very surprising to find that areas with the greatest (lowest) population growth also tend to be the areas with the largest (smallest) real house price increases over this period.    It isn’t a mechanical, or one-for-one, relationship of course.  One factor is likely to be differences from TLA to TLA in how practically constraining the land-use rules are.  All else equal, a TLA where land use restrictions are less constraining will see less real house price inflation for any given population increase than a TLA with more-binding restrictions.  (I’m not aware of any good land-use restrictions indexes for individual New Zealand TLAs).

The observation on the far right of the chart might be an illustration of this point.  That dot represents Selwyn district, on the outskirts of Christchurch.  It has experienced a huge population increase –  in excess of 50 per cent in nine years –  especially since the earthquakes.    Some observers argue that the local authority has been relatively liberal in facilitating new housing and business development.  Perhaps (I was a little sceptical here), but one other factor is that, at the margin, people considering buying in Selwyn are likely to be considering developments in the rest of greater Christchurch too –  and over this period real prices in Christchurch city and Waimakariri only rose 10 and 14 per cent respectively.

The other obvious outlier is the observation at the top of the chart –  that for Auckland.  Real house prices in Auckland have risen 61 per cent since the 2007 peak.  Auckland has had considerable population growth over that period (16.1 per cent)

There could have been a variety of factors at work explaining how much Auckland prices have risen (even given population growth):

On the other hand, factors that aren’t likely to explain the difference include:

Sometimes people will try to ascribe strongly rising house prices in particular localities to the state of the specific region’s economy.   But since 2007, Auckland’s average GDP per capita has grown no faster than that in the country as a whole. 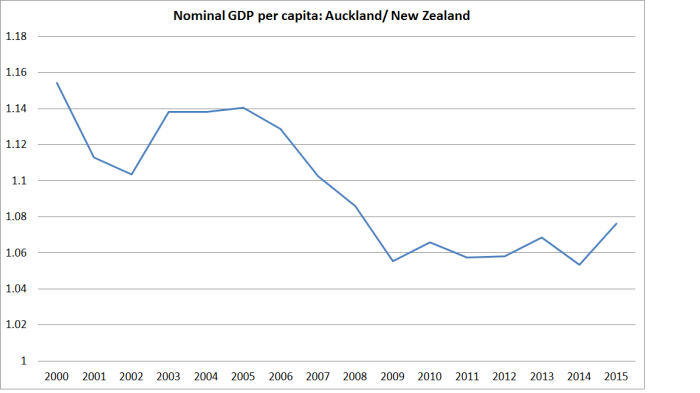 and the unemployment rate in Auckland has mostly been a touch higher than that in the country as a whole. 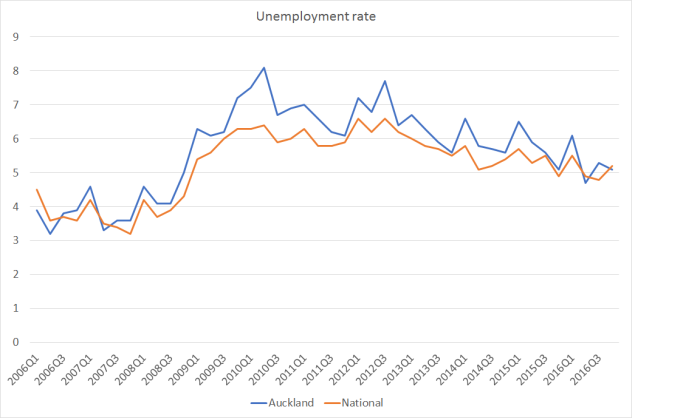 The other thing that struck me from the scatter plot above was just how many parts of New Zealand still have real house prices lower than those at the peak of the previous boom.   Some have had falling populations, but one or two have actually had faster population growth than Auckland  (eg Carterton, for some reason unknown to me).   These are the places where real house prices are still more than 10 per cent lower in real terms than in 2007.

It is easy for people in Auckland and Wellington to be dismissive of some of these places, but as I’ve already illustrated, it isn’t as if Auckland’s economic performance over the last decade has stood out as noticeably better for the average person than that of the country as a whole.

11 thoughts on “House prices and population”