The Reserve Bank’s Financial Stability Report this morning was something of a mixed bag, to say the least.

I’ll deal with the positive bits first. the discussion of stress tests of bank balance sheets, in the face of the very severe adverse economic shocks (of the sort we are seeing now –  whether the more optimistic takes of official agencies, or rather more severe economic loss/slow recovery scenarios).

Here is their summary take

Which is good, both the prominence of the discussion (this clip is from the cartoon summary) and the bottom-line conclusion. 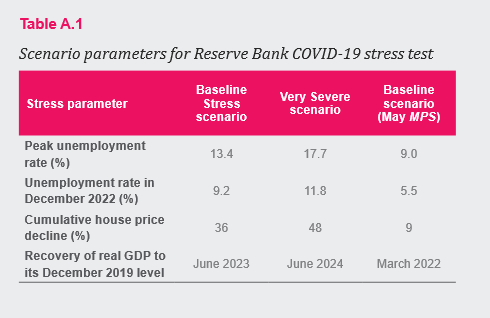 And here was the summary commentary 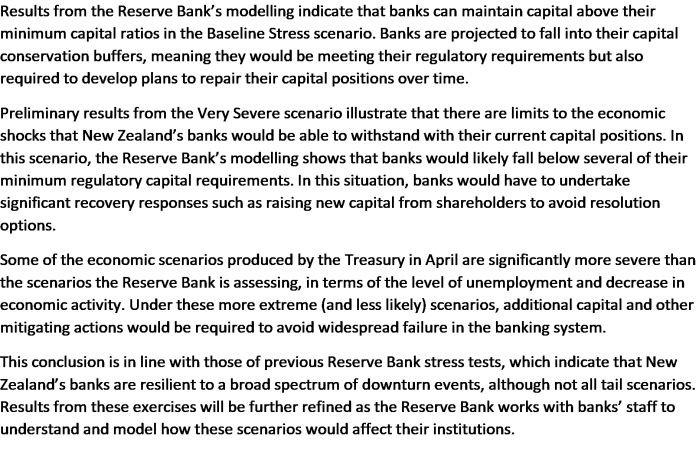 As they note, these conclusions – now in the midst of an actual unfolding event –  are not dissimilar to those from past stress tests. In at least one of those, house prices falling almost 50 per cent and unemployment staying around 12 per cent for several years didn’t create too many problems.  And it is a combination of a deep, reasonably sustained, fall in house prices AND a substantial sustained rise in unemployment that gives rise to substantial losses on residential loan books.  If just house prices fall, people will usually keep on paying their mortgage (including because few can effectively just walk away), and if just unemployment rises (and house prices fall only say 10 per cent), people might be in trouble, but banks can still recover most of their money.

So all of this is good –  the discussion, and the robust banking system.  It was the standard message the Bank used to tell people.  But then it became inconsistent with the other “causes”.  Wheeler wanted to put on LVR restrictions, for which stress test results were inconvenient.  And then the new Governor got a bee in his bonnet about wanting banks to have much more capital in their overall funding mix.  So for a year or more, while he tried to make his case for much much higher effective bank capital ratios, the stress test results –  consistent over years –  were played down, and often almost dismissed.

Then, of course, reality interjected itself, and now the Governor is quite content to run lines about how sound and robust our banking system is –  in the face of such a savage shock –  and how enlightening stress test results, preliminary as the current ones are, can be.

I would encourage people to believe the Governor on this one.  But changing your tune so dramatically, when it also happens to suit –  central bank Governors and supervisors will always want to play down risk once a crisis looms – isn’t that great for your longer-term credibility.  If the Board and Minister were doing their jobs, it is an issue they would take note of, and seek to remedy.

That was the good bit of the FSR.

There was also lots of spin.  It is old ground and I’m not going to repeat it all here.  Suffice to say that they continue to claim that monetary policy has done a lot, both through the OCR and the LSAP.   That means they are keen to emphasise the current level of the OCR, but not how little it has changed since the economic situation changed –  surely the only relevant metric, even in their modelling.  They talk about falls in interest rates, but never once mention the drop in inflation expectations, which means real interest rates haven’t changed much at all.  And they continue to hype the benefits of the LSAP, far beyond anything a careful reading of the data will support.

And then there was the notable omission.   Despite “efficiency” appearing in all their governing legislation as a consideration in shaping and applying prudential policy, there appeared to be no mention at all of the huge and persistent margin between retail term deposit rates in New Zealand and rates on other domestic liabilities with the same credit risk.  I discussed the issue at some length in a post last week. 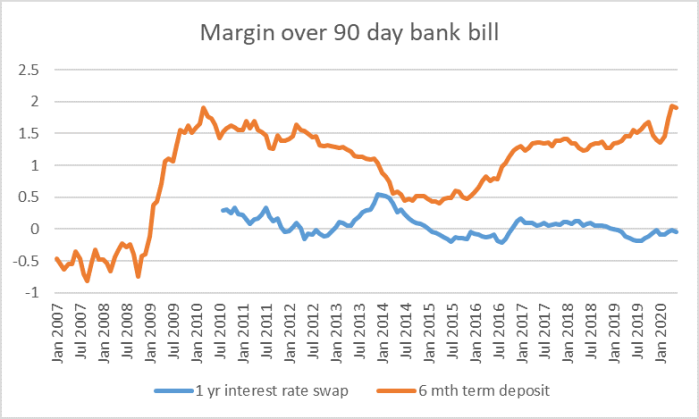 (Yes, it was a little embarrassing to end that post suggesting that the Bank look again at its Core Funding Ratio requirement, only to learn shortly after that they had already done so quietly in March.  I should have remembered that, although in my slight defence I had checked on the Bank’s Core Funding Ratio page which then –  and still today –  does not mention the reduction, suggesting that the CFR is still 75 per cent.)

Over the last decade, retail rates have been very close to wholesale rates, and although there is a gap at present, it is far smaller than the comparable New Zealand gap.  (And, of course, Australia’s inflation target is higher than New Zealand’s, so if depositors treated that target as credible, retail deposit rates in Australia (inflation target midpoint 2.5 per cent) would be deeply negative, while even with those new ANZ rates New Zealand’s would be barely negative at all.)

Given that the Reserve Bank has eased the CFR it is a bit puzzling why such a large wedge endures: it cannot be an sustainable equilibrium market outcome for instruments of identical credit risk (and at the margin, retail term deposits may have less credit risk than wholesale, given that bailout probabilities range from very high to almost certain).

In the circumstances one might have hoped for some analysis of this issue from the Bank in the FSR –  it being relevant both to the efficient functioning of the financial system, and to the effective stance of monetary policy (given MPC’s refusal to cut the OCR further).  It cannot be about credit ratings or ratings agency insistence (given that these are the same banking groups).  Perhaps there is some small element of customer resistance to lower rates here, but that doesn’t really stack up given how far retail rates have fallen over the years in Australia.

One possibility is that the Bank’s cut in the OCR is not being treated by the banks as credible relief for any material period of time.  The easing was announced at the height of the mid-March panic, and no timeframe was put on it.  There is still no timeframe, and no discussion in the FSR of how banks’ funding managers and Board might treat such indeterminant regulatory relief.  If, for example, banks thinks the Reserve Bank might snap the CFR back to 75 per cent once offshore funding conditions ease –  and a chart in the FSR suggests that might not be too far away, at least in price terms –  they’d be very hesitant about changing their entire funding, and marketing, strategy, and risk alienating customers they might need to court very soon.  I don’t know if that is the explanation, but it would certainly be consistent with what we’ve seen (movement not seen) in markets.  If the Bank was serious about closing these gaps –  and perhaps it isn’t  –  the sort of multi-year commitment to a lower CFR –  as I proposed in last week’s post –  would be a better approach to take.  As it is, we seem stuck with this gross inefficiency in our markets, and with retail interest rates well above those in (notably) Australia, despite the very difficult economic times and (on the Bank’s own telling) below-target inflation outlook.

And if there was no discussion of how banks might behave when given no timeframe (re the CFR) , I could also see no discussion of how banks might respond when there is a timeframe.  The Bank has removed the LVR restrictions for a year, and delayed the commencement of the higher capital requirements for a year.  In Covid-time, a year might seem an awfully long time, but it really isn’t if you are running a business like the big banks.    If the Governor is really going to insist next year that minimum bank capital requirements have to start rising again, that will very soon –  if not already –  be affecting bank behaviour, pricing, and so on.

The Governor has made much of buffers, and leeway, (all supported by no specific calculations), but if he is determined to stick with 2019’s plan, just delayed a year, that will impede credit availability to support the recovery.   Again, given the Governor’s confidence about stress tests etc, it would be far better to simply scrap the higher capital requirements –  perhaps keep a few useful detailed refinements –  and suggest the Bank will take another look in  five years’ time.  If the Governor is right about the stress tests, in a really savage adverse shock, those proposed higher capital requirements will prove never to have been needed.  And if he is wrong, the next five years will be spent working through loan losses and gradually rebuilding capital ratios to current levels –  much higher ones still can wait quite a few years (by when, on current government plans, new legislation will have provided a better governance framework for bank regulation, and removed the Governor’s sole power to pursue regulatory whims).

5 thoughts on “A mixed bag”