The calendar says it is summer, but “summer” seems to have bypassed Wellington.  We’ve been back for 10 days and on not one of them has it been warm enough for a swim.  Right now, my phone says it is warmer in Waiouru than in Wellington.  And so, between driving lessons for my son, I’m still pottering in the national accounts data released late last year, although this will be the last such post for now.

At the end of November, I ran a post here on investment and capital stocks, drawing on the annual national accounts data released a few days earlier.  One of the central charts was this one

What about business investment?   SNZ don’t release a series for this –  but they could, and it is frustrating that they don’t –  so this chart uses a series derived by subtracting from total investment general government and residential investment spending.  It is a proxy, but a pretty common one.

Business investment as a share of GDP has been edging up, but it is still miles below the average for, say, 1993 to 2008, a period when, for example, population growth averaged quite a lot lower than it is now.  All else equal, more rapid population growth should tend to be associated with higher rates of business investment (more people need more machines, offices, computers, or whatever).

So common is this proxy for business investment that for a long time it was how the OECD was doing things, including in cross-country comparisons where New Zealand mostly did poorly.    Note that none of this approximation would be necessary if Statistics New Zealand routinely published a business investment series.  There is no obvious reason for them not to do so –  no individual institution confidentiality is being protected (as an example of one reason SNZ sometimes advance for non-publication).

My working assumption has long been that government-owned business operations designed to make a profit (notably SOEs) were not being included in “general government”.    I didn’t just make up that assumption; it is a standard delineation advanced by the OECD themselves.  Here is their own definition

In other words, “general government” would include government types of activities, including things –  even semi-commercial things –  mainly funded by government units (whether large losses, or direct subsidies or whatever).   Core government ministries would count.  State schools would count as part of “general government”, but fully private schools would not.  And nor, on the standard interpretation would the investment of New Zealand SOEs (required to aim to generate profits for the Crown) or fully market-oriented trading companies that might happen to have a majority Crown shareholding.    Such trading companies are mostly funded by their customers (and private debt markets) not by the Crown.

But it turns out that this isn’t how SNZ has actually been doing things in New Zealand, at least as regards the “sector of ownership” data I’ve used (and which the OECD has typically used for New Zealand).

I learned this because of a pro-active outreach by an SNZ analyst, to whom I’m very grateful.  This analyst emailed me noting that he had enjoyed my posts on the annual national accounts, but…

I suppose it makes sense when one thinks about it (Air NZ and most of the electricity companies are majority government owned, and SNZ confirmed that they do not pro-rate).

As it happens, help was at hand.  The SNZ analyst went on

An alternative source for general government investment data is our institutional sector accounts which include GFKF for each institutional sector.  In recent years we have adopted a new sector classification – Statistical Classification for Institutional Sectors (SCIS) – to give more visibility to the roles of the various sectors in the economy. SCIS sector 3 (General government) GFKF is held under the series SNEA.S3NP5100S300C0 . We are currently expanding the range of sectoral National Accounts that we regularly compile and disseminate on both an annual and quarterly basis.

The following chart compares the sector of ownership basis with the SCIS basis for general government investment as a share of GDP.

This then goes on to impact the presentation of business investment as you have calculated it: 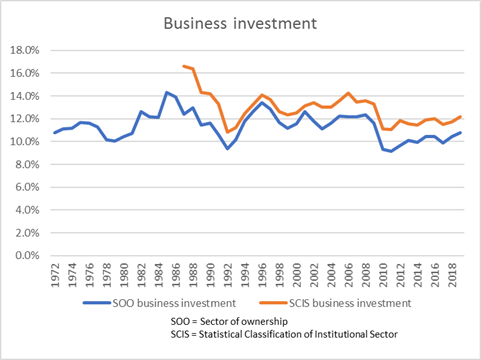 The helpful SNZ analyst went on to note that SNZ could do things better.

I acknowledge your point that we can improve our presentation of investment data. We are looking at what we can do to improve this, particularly in giving more prominence to the government and business investment dimensions that your post highlights. We do want to support a consistent basis for the monitoring of government and business investment. Our development work to expand our sector based accounts will support this and allow us to improve both our annual and quarterly presentation. Note that the institutional sector accounts have a shorter time series available, but as we work through this we will consider extending the length of the SCIS based GFKF time series.

A quarterly “business investment” series should be treated as a matter of some priority.

The other aspect of my proxy that had bothered me a little over the years was the possibility of an overlap between residential investment and general government investment.  If the government itself was having houses built that should, in principle, show up in both.  I could, therefore, be double-counting my deductions.  I was less worried in years gone by –  the government itself wasn’t having many houses built –  but the current government has talked of large increases in the state house building programme.

Apart from needing to make a choice over how to define general government investment as discussed above, the proxy you are using for business investment seems fit for purpose in the interim.

Thanks too for confirming that there is little overlap between residential building investment and government investment.  That had been my clear impression in the past –  and I know the OECD has done “business investment’ indicators the same way I was doing them –  but had been a little uneasy that with building of state houses ramping up again the overlap might be increasing.  If there still isn’t much overlap is that because (say) the construction only moves into Crown ownership when it is completed?

To which he responded

I was still a bit uneasy –  1-2 per cent didn’t really seem to square with talk of thousands more state houses –  but would have left it for then.  Except that the SNZ analyst came back again

A colleague has reminded me of our building consents release in February (https://www.stats.govt.nz/news/40-year-high-for-home-consents-issued-to-government) where we said:

Central government agencies, including Housing New Zealand, were granted consent for 1,999 new homes in 2018, which is the highest number since the year ended November 1978 when 2,105 were consented.

“There has been significant increases in new home consents issued to central government agencies in the last few years, with levels approaching those last seen in the 1970s,” construction statistics manager Melissa McKenzie said.

However, private owners (including developers) accounted for 94 percent of the 32,996 new homes consented in the year ended December 2018.

Partnerships between the government and private developers to build new homes may not be reflected in the central government numbers as the results depend on who was listed as the owner on the consent form.

So there seem to be a few problems to be sorted out at the SNZ end, leaving users of the overall investment data –  and particularly anyone looking for a timely business investment proxy –  somewhat at sea.   It probably isn’t a significant issue for making sense of the last decade or two, but if the state is going to be a bigger player in having houses built for it the data for the coming years will be murky indeed.

Unless, that is, Statistics New Zealand treats as a matter of priority the generation and publication of a timely “business investment” series.  They are only agency that can do so, that has access to the breakdown of which government-owned entities are investing, and what proportion of residential building activity is for government.

I guess this is just one among many areas where we see the results of SNZ not really being adequately funded, over many years, to do core business (even as they have funding for extraneous purposes, notably the collation of wellbeing indicators, some sensible, some barmy).   There aren’t many votes in properly funding such core activities, but it doesn’t make them less important.

I really do appreciate the pro-active amd helpful approach of SNZ’s analyst.  I hope his managers are receptive to the need to improve the quality of the investment data SNZ is publishing.

And the bottom line?  So far as we can tell, business investment has remained very weak, and quite inconsistent with what one might have expected in the face of the unexpected surge in the population over the last five years.  Firms, presumably, have not seen many profitable opportunities.