In my post yesterday I looked at various New Zealand saving and spending series across time, drawing from the recently-released annual national accounts data.  In this post I’m looking just at national savings rates, but across the spectrum of advanced countries, as proxied by membership of the OECD.

Savings rates have been a hardy perennial in discussions of New Zealand macro data and economic performance for a long time.   It is perhaps in the nature of the case given that for much of its modern history, New Zealand has drawn fairly heavily on foreign savings (and thus has typically had quite a large negative net international investment position).  For much of our more recent (say, post-war) history, economic performance –  proxied by productivity or per capita income measures –  has also disappointed.

The stylised facts were that, by comparison with other advanced countries, our national savings rates tended to be fairly low.     Quite why wasn’t  –  perhaps isn’t – lways clear.   For most of the post-war period –  the 70s and 80s were the exception –  the government’s accounts tended to be fairly well-managed.  And although the tax treatment of household savings tends now to be quite hostile –  under the guise of (a false conception of) neutrality –  it wasn’t always so (until the changes at the end of the 1980s).

In this post, I’m concentrating on the same indicator of national savings I used in yesterday’s post: net savings as a percentage of net national income.  In other words, provisions for depreciation don’t count as saving (they aren’t available to build the capital stock, only to maintain it), and the relevant income measure is the income available to New Zealand residents after providing for depreciation. In other words, the income available to consume or to build the capital stock.

In the paper a few years ago in which I first tried to document and articulate my story around New Zealand’s economic underperformance I included a chart showing that in the early 1970s (when comparable international data date back to), New Zealand had had the sixth lowest national savings rate of the OECD countries for which data were available.    Here is a version of that sort of chart.

In many ways, it is quite a startling range, and not just for a single year (which can be influenced by different cyclical factors).

One of the points I made in that earlier paper was that New Zealand didn’t look such an outlier if one focused in on just the Anglo countries –  not just the ones we often compare ourselves too, but also perhaps the countries with the greatest cultural similarities to New Zealand.    In this particular snapshot, we had national savings rates higher than those in the UK, Canada, and the US, while all four countries were materially lower than Australia.

How has that Anglo country comparison unfolded since?

Now, one point I probably didn’t make clearly enough in yesterday’s post is that inflation can distort these numbers, especially for countries with large net international investment positions (particularly large debt positions).   In the presence of inflation, some of the interest paid abroad is recorded as a factor income payment when, in economic substance, it is just a compensation for inflation and thus is, in effect, a repayment of principal.  This is a well-recognised point, highlighted from time to time by agencies such as the Reserve Bank, but there are no official series making the correction.

For New Zealand in the early 80s, most probably our “true” national savings rate was below that in other countries –  there were large government deficits at the time – but at a time of heavy indebtedness and still quite high inflation (most of our debt then was denominated in foreign currency) the gap would be smaller than shown here.

What of the current position?   At present, the UK and Canada have NIIP position near zero, while Australia, New Zealand, and the United States are all around -50 per cent of GDP.     But the US net position is mostly an equity position, reflecting high share prices (foreign holdings thereof).  In the New Zealand case in particular, by contrast net debt is almost equal to (ie in net terms makes up almost all of) the overall net investment position.    With a core inflation rate of perhaps 1.7 per cent, our national savings rate would be perhaps 0.8 percentage points higher again if inflation were accounted for correctly.  But bear in mind that 15 years ago, not only was inflation (and inflation expectations) a bit higher, but that our NIIP position was also more negative (more like 70 per cent of GDP).  The appropriate adjustment then might have been more like 1.5 percentage points.

Bottom line: it is a real issue to keep in mind, but the extent of any adjustment required is less now than at any time since the early 1970s (when inflation was getting up but the NIIP position was small).

What about the simple comparison with Australia?  Australia has often been held up –  especially in New Zealand –  as some bastion of (Anglo) high savings.  Champions of compulsory private savings (as found in Australia) are fond of it, even though those champions will rarely acknowledge that the gap between Australian and New Zealand (net) national savings rates has been smaller in the years since Australia introduced compulsory private savings than it was previously.

So how do the simple New Zealand/Australia comparisons look?

(Note that these are comparisons of net savings rates –  the share of income available to build the capital stock.   Australia’s mining and resources sector is very capital-intensive and comparisons of gross saving rates –  which include depreciation provisions –  are higher in absolute terms, and Australia’s are higher relative to those in New Zealand.)

And here is the comparison for that whole group of OECD countries for which there was data right through since the early 1970s, this time an average for 2013 to 2017, the most recent five year period for which there is comprehensive data.

New Zealand in the upper half of the (old) OECD.    Not a chart I really expected to see. 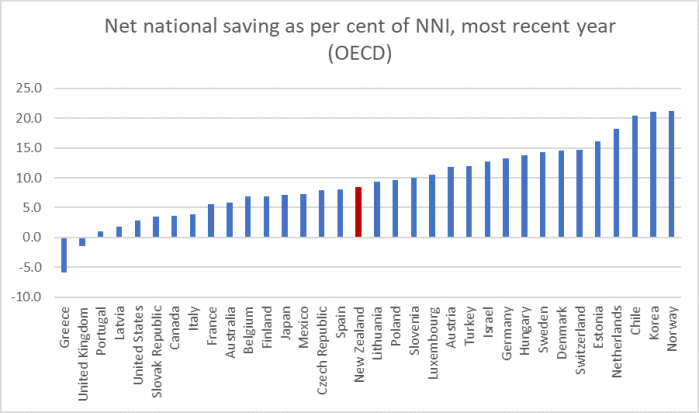 Now, personally, I wouldn’t get too excited about this.   When you are among the handful of countries with the fastest trend population growth rates you would expect over time that your country should also have relatively high (net) savings rates (all that capital stock, whether commercial, public, or residential, is typically owned and paid for locally eventually).  And all the countries in the upper quartile of that last chart have modest rates of population growth (or have falling populations –  Estonia).   But it is a somewhat different emphasis than we’ve been used to seeing.

7 thoughts on “Savings rate across the OECD”