It is eighty years today since New Zealand declared war on Germany, joining the United Kingdom in responding to the unprovoked aggression of the German invasion of Poland.  Until just now, glancing at one of the government historical websites, this statistic hadn’t occurred to me

New Zealand was involved for all but three of the 2179 days of the war — a commitment on a par only with Britain and Australia.

It is estimated that 11928 New Zealanders died in the course of that conflict, a death rate (per million population) higher than in any other Commonwealth country.  Dreadful as the war was, it still strikes me as something closer to a just war (for our side) than most other conflicts in modern history –  although, of course, the counterfactual is unknowable.

Back in the very early days of this blog, I wrote a short post on some aspects of the New Zealand economy in and around World War Two (while lamenting the absence of a modern analytical book-length treatment).  Here is the gist of a few of the paragraphs from that post

Two things from the period did stand out.

The first is that, while New Zealand devoted almost as much of its GDP to the war effort as any of the major combatants (at peak similar to that in the UK, although the UK held the peak for longer), material living standards for the civilian population seemed to remain relatively high –  notably the quality of the diet, access to petrol etc.  Perhaps that partly reflects just what a rich country New Zealand then was.  Using Angus Maddison’s data: 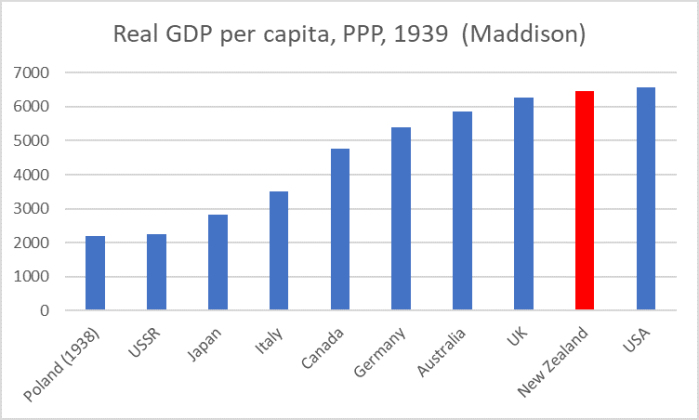 New Zealand’s GDP per capita in 1939 was second highest of those countries shown (a year earlier –  the US in recession –  we’d been top of the table).  It may have been easier to devote a larger share of GDP to the war in a rich country like New Zealand than in a relatively poor one like the USSR, where a larger share of resources would have to have been devoted to subsistence.

And the second point is the dramatic transition: New Zealand went from being on the brink of default in 1939 to being, in effect, defaulted on just after the war.  In 1939, in the wake of the imposition of exchange controls, Walter Nash emerged from a humiliating mission to London, with a very onerous schedule of overseas debt repayments.  If the war had not been looming –  which made the British government keen on maintaining good relations with the Dominions –  it is quite possible that New Zealand would have been unable to rollover maturing debt at all, probably ending in a default to external creditors.  By just after the war, New Zealand  –  having markedly reduced its external debt ratios during the war – made a substantial gift to the UK (as did Australia): in reality, Britain was quite unable to meet all its obligations and needed some of them written down.

In a paper a couple of years ago, some IMF economists looked at examples of countries that had markedly reduced their overseas debt.  The New Zealand experience during WWII was as stark as any of those reversals, but is too little studied.  It seems to have mainly resulted from a determination to pay for as much of the war as possible from taxation, together with the controls and rationing that limited private sector consumption and investment.  But it was not because of any strength in New Zealand’s terms of trade: 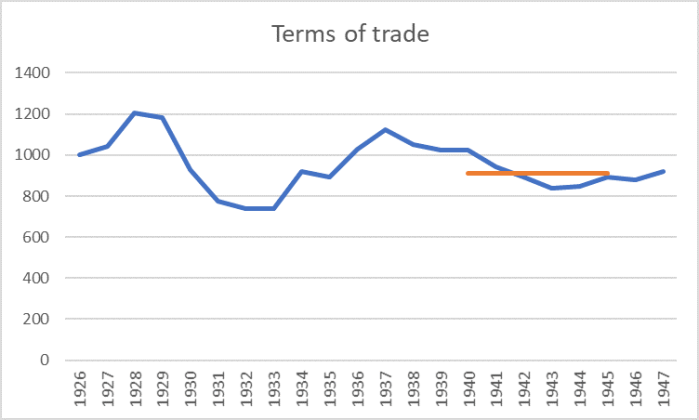 New Zealand’s terms of trade fell during the war years –  our import costs rose as global inflation increased, but there was little adjustment in the prices of the agricultural/pastoral products New Zealand sold to Britain.

Notwithstanding the lives lost (and the constraints on consumption, free speech etc) New Zealand’s experience of World War Two was pretty mild.  No combat occurred on our shores –  nor was it ever credibly likely to –  and we didn’t even have anything akin to the bombing of Darwin or of Pearl Harbor.

Of all the countries involved, perhaps Poland’s experience was worst.  I wrote a post here late last year, at the time of the 100th anniversary of the end of World War One (in turn leading to the re-establishment of an independent Poland), in which I noted that

My own reflection on Poland is that it is hard to think of a place in the western world (say, present day EU, other bits of western Europe, and western European offshoots – eg New Zealand, Australia, Canada, US, Argentina, Chile, Uruguay) that wouldn’t have been preferable to live in over the last 100 years or so, at least as judged by material criteria.   Perhaps if you were German, you have to live with the guilt of World War Two, but most of Germany was free again pretty quickly.   Romanians and Bulgarians might have been poorer on average, but they largely escaped the worst horrors of the German occupation.  To its credit, Bulgaria managed to largely save its Jewish population, while the Polish record was patchy at best.  With borders pushed hither and yon, and not a few abuses of other peoples (notably ethnic German) post-war, sanctioned by the state, the place then settled into 40 years of Communist rule.   There is a lot to admire about Poland, but I wouldn’t have wanted to live there any time in the 20th century.

And never more so than during and just after World War Two.

But against that backdrop it leaves the story of the Poland in the last 30 years or so all the more impressive.    Some will be critical of various aspects of Polish governance etc, but they are now bringing up 30 years of democratic government –  and changes of government –  something that would have been hard to imagine when I was young, or –  in the late 30s –  when my parents were young.

And then, of course, there is productivity: real GDP per hour worked.   We don’t have very long runs of data for this variable, but here is the ratio of Poland to New Zealand for the 25 years for which there are data for both countries. 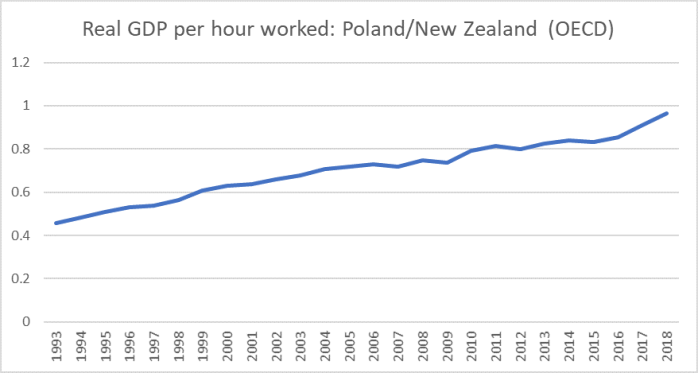 Them doing better doesn’t make us worse off (of course).  Their success is great for them and their people.

But, as we ponder the deeper issues of loss, sacrifice, freedom, the threat of tyranny etc –  all exemplified in the story of World War Two –  it might still be worth reflecting on how extraordinary New Zealand’s relative economic decline  (relative to every single country on that first chart above) would have seemed to our leaders in 1939 if someone could have told them then how poorly New Zealand itself would do over the next 80 years.