Geoff Simmons, the economist who is leader of The Opportunities Party (TOP), invited me to come along to their monthly Wellington event to talk about my views on New Zealand’s immigration and the likely connections between high target rates of non-citizen immigration, extreme remoteness, and New Zealand’s long-running productivity underperformance.    Geoff has run a series of these conversations –  including one fairly recently with Arthur Grimes on the “wellbeing Budget”, and another on aspects of the tax system with Andrew Coleman.   They seem to be the party of policy wonks  (TOP’s own immigration policy –  much of which I’m fairly sympathetic to – is here).

Monday evening’s conversation with Geoff, and the follow-up Q&A session, was recorded and is now available (the title is their own –  I rather winced when I saw it this morning)

I haven’t listened to it again so am not sure how the story comes across in this format.  Like, I’m sure, almost every speaker ever I came away conscious of lines that could have been run better, or useful analogies that I forgot to include.  But for anyone interested, there it is.

I’ve done various presentations, articles, and so on on elements of my story, tailored for different audiences.  Some of those from recent years are 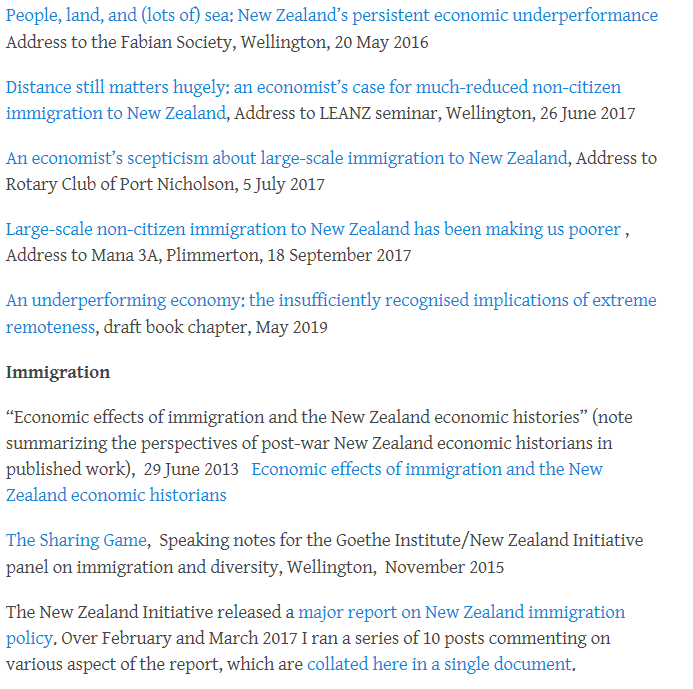 Links to all those are available here.

For the gist of the story, here are the last couple of paragraphs of one of those speeches.

40 years ago, Sir Robert Muldoon, Bill Birch and the rest of that government launched the series of incredibly costly energy projects known as Think Big.  It was, with the best will in the world, an utter disaster.  But it came to end after only a few years.   By contrast, our immigration programme, which has now run this way for almost 30 years is really much more deserving of the label Think Big: it is bigger, has skewed the economy more, has lasted longer, and has done much more to damage the prospects of New Zealanders living here.  There has been a central planners’ conceit that we can simply ignore what NZers are doing –  leaving, typically in large numbers –  and bring in lots of (modestly skilled) foreigners, and concentrate them in Auckland.  Do so, so the implicit story goes, and new highly rewarding industries and opportunities will arise –  the wonders of what economists call agglomeration.   It has proved to be an incredibly flawed strategy.  In successful big cities abroad, GDP per capita far exceeds that in the rest of the respective countries, and the gaps are growing.  Think London, or Paris or Shanghai, or San Francisco or Amsterdam.  But just don’t think Auckland.  Despite really rapid population growth over decades, Auckland’s GDP per capita exceeds the New Zealand average by only a modest margin.  And worse, for the 15 years for which we have data, that gap has been shrinking, not widening.    British exports are London-based, but it is hard to think of a material export industry that is based in Auckland (or Wellington).

We need to start taking more seriously the terrible disadvantages our distant location imposes.  That means it is time to give up the big (population) ambitions that have guided –  probably subconsciously –  most political leaders since at least Julius Vogel, and instead make the most of the strengths we already have: smart and energetic people and strong institutions.  Perhaps one day we’ll have exceptional productivity growth, and so many opportunities here that we simply can’t make the most of with the people we have.  For decades, it hasn’t been that way.  It isn’t now.  So we should stop the mythmaking, and revert to being a normal country –  one that makes its own prosperity, with its own people –  rather than endlessly hankering (as our officials and ministers constantly seem to) after some better class of people over the water who, if only we could get them, in enough numbers, might finally reverse our century of decline.  It simply won’t happen.  We need to change course.