Next week we mark the 100th anniversary of the end of World War One.   Whatever else –  good and ill –  the resulting peace process ushered in, it led to the restoration of an independent Poland.   I was reading an article the other day by a British writer, resident in Poland, reflecting on 100 years of (renewed) Polish independence, which in turn prompted me to dig out some economic data.

My own reflection on Poland is that it is hard to think of a place in the western world (say, present day EU, other bits of western Europe, and western European offshoots – eg New Zealand, Australia, Canada, US, Argentina, Chile, Uruguay) that wouldn’t have been preferable to live in over the last 100 years or so, at least as judged by material criteria.   Perhaps if you were German, you have to live with the guilt of World War Two, but most of Germany was free again pretty quickly.   Romanians and Bulgarians might have been poorer on average, but they largely escaped the worst horrors of the German occupation.  To its credit, Bulgaria managed to largely save its Jewish population, while the Polish record was patchy at best.  With borders pushed hither and yon, and not a few abuses of other peoples (notably ethnic German) post-war, sanctioned by the state, the place then settled into 40 years of Communist rule.   There is a lot to admire about Poland, but I wouldn’t have wanted to live there any time in the 20th century.

In economic terms it has always been something of a laggard.   Here from Angus Maddison’s collection of data are estimates of real GDP per capita for 1870 and 1913 for the UK, France, Germany, the territory that was Polish, and New Zealand. 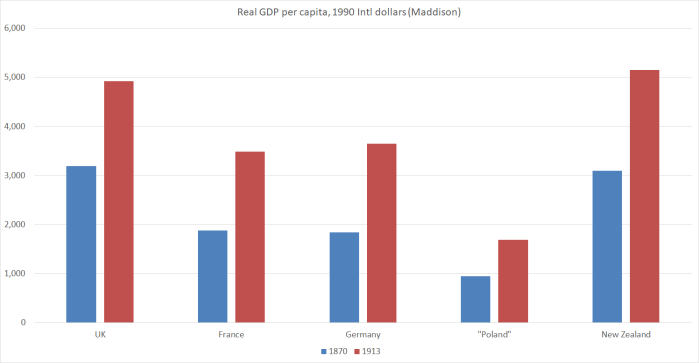 Real GDP per capita in Polish territory (mostly ruled by Russia) was about a third of that in New Zealand.

The Maddison database has annual data for Poland from 1929 (excluding the period of the war), and that ratio of Polish GDP to New Zealand GDP seemed to show no real trend whether pre-war or in the communist years, averaging just a bit more than a third.

Relative prices – including the purchasing power parity exchange rates used- matter quite a lot in these cross-country comparisons across time.  So not too much should ever be put on any particular levels estimate.  The Maddison database only comes forward to 2008 and the most widely used current numbers are those from the OECD.  On their calculations, at the end of communism Poland was a bit better off (say, relative to New Zealand) than in the Maddison numbers.  Polish GDP per capita in 1990 is estimated to have been about 44 per cent of that in New Zealand.

Here are the OECD estimates for the period since.

On OECD estimates, Polish real GDP per capita hit 75 per cent of that in New Zealand.

Last year, Poland’s labour productivty reached 82 per cent of that of New Zealand.

All of which is clearly very good for Poland.   And it clearly isn’t just that they’d thrown off the shackles of communism: as the earlier charts show, Poland had been a laggard in the 19th century, and in the first half of the 20th century.

But, of course, part of the good news in these charts is a reflection of New Zealand’s own poor long-term performance.

Here are the latest OECD labour productivity (real GDP per hour worked) estimates for the same group of countries as in my first chart above.

Last year, for the first time, Polish real GDP per hour worked passed 50 per cent of that in France and Germany.  100 years ago, of course, both France and Germany would have lagged well behind both the UK and New Zealand.

Perhaps Poland will go on to achieve much greater convergence with the other big European economies in the next few decades – we can only hope so –  and yet one can’t help wondering whether the leaders of a newly independent Poland wouldn’t have been rather disappointed if they’d been told that 100 years on their successors and fellow citizens would still be achieving only half the output per hour of the French and Germans.

Then again, they’d probably have been astonished to learn that 100 years on they’d be managing 82 per cent of average New Zealand productivity (and even 63 per cent of that of the British –  leading global power a century ago).

Hard to think though how disbelieving our own leaders would have been 100 years ago if they were told how far we would have fallen relative to these other countries, notably including Poland.     With none of the excuses –   wars, shifting borders, genocide, or decades of communist rule.

I might have a look at the data for a few of the other post World War One emergent countries later in the month.

23 thoughts on “On Poland and economic performance”