I agreed with the bottom line policy decision yesterday of the new Monetary Policy Committee (it was “unanimous” the Governor twice told us yesterday, even though their charter tells them to aim for consensus not for a vote).  Cutting the OCR looks, with the information to hand now, to have been the right thing to have done (although, as always, only time will give us a better sense as to whether it was in fact the best choice).

But, as a rather portentous (but also somewhat empty) recent Bulletin article reminded readers, there is more to the responsibilities of the Monetary Policy Committee than the succession of OCR decisions.    And on their first outing yesterday I don’t think they were performing that well.  It is early days of course –  three new externals (one of whom wasn’t even there for this round), and two internals who’ve both been in their new roles for less than two months. But there is a (very) long way to go if they are serious about the aspiration the Governor sometimes runs about being the best central bank.

Getting some basic facts right would be a helpful start.  For example, I heard the Governor on Radio New Zealand this morning talking about business investment, and suggesting that it was high but not rising.   Here is a chart showing non-housing investment, and the best proxy for business investment (total less housing less government) as a share of GDP (and recall that GDP growth itself has been slowing). 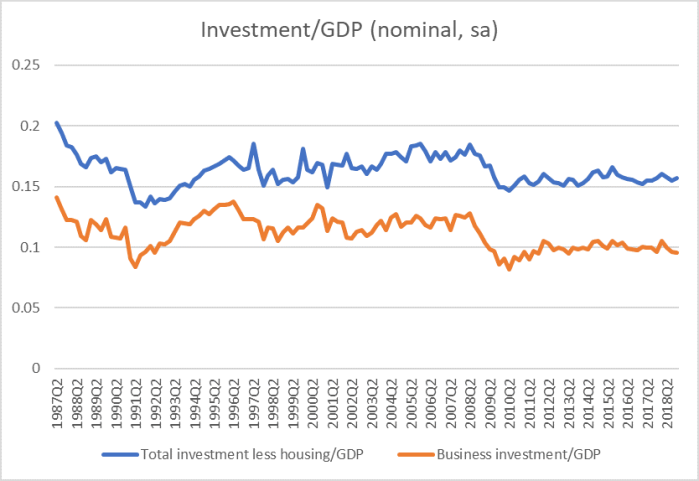 Doesn’t look very high to me.

Or there was the exchange in the Governor’s press conference when he was asked about the persistence of low nominal interest rates and whether this was some sort of “new normal”.   There are all sorts of possible, reasonable, answers to that one, but the Governor’s answer wasn’t one of those.  He suggested that what we have now is a return to some sort of “old normal”.   To be sure, real interest rates were at times materially negative in the periods (70s mostly) when inflation was very high, but the Governor explicitly claimed to be referring to an earlier period.  Here is a chart from yesterday’s Martin Wolf column in the Financial Times. 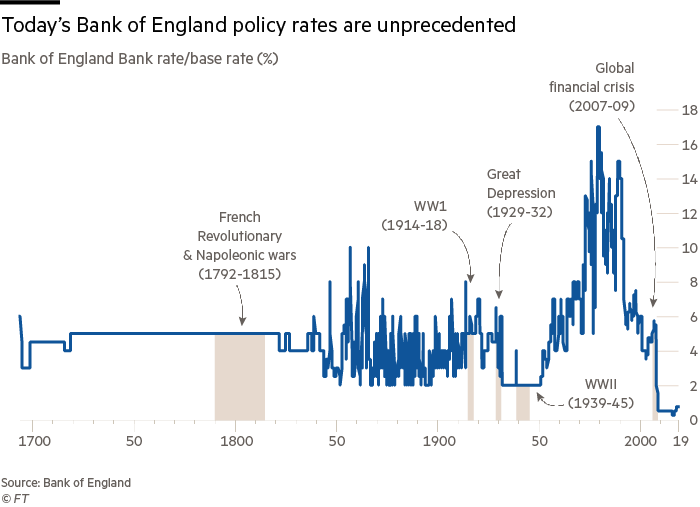 The Governor also seemed rather cavalier (again/still) when asked about the limits of conventional monetary policy.  He waves his hands, talks expansively of all sorts of other tools, and yet never once mentions that the countries that reached the limits of conventional monetary policy in the last downturn mostly had very subdued recoveries –  and there is a reasonable argument that with more monetary capacity fewer people would have been unemployed for as long as they were.

In the document itself there were also various odd or questionable bits.  The downside risks to the world economy seem to have played a large (surprisingly large) role in yesterday’s decision, but I was left wondering about the supporting analysis when I read this in the document.

New Zealand has become more exposed to international shocks over time as our global economic links have strengthened. Structural changes since the 1980s, such as the liberalisation of trade and capital movements, have increased our exposure to international economic conditions.

What can they have in mind?   Foreign trade as a share of GDP has been shrinking this century, foreign investment has been subdued, immigration has almost always been important in modern New Zealand history, and external indebtedness as a share of GDP hasn’t risen for decades (even if the composition has shifted from public to private) and is materially lower than it was 100 years ago.  And, on the other hand, we’ve had a floating exchange rate since 1985 which acts as a semi-automatic buffer to many global shocks.

Then there was what looked a lot like a (questionable) bid for the government to increase its own spending.  In the press conference, the Governor disavowed any suggestion of wanting more government spending as a cyclical stabiliser, but in the minutes (the new element of the document) we read this (emphasis added))

The members acknowledged the importance of additional spending from households, businesses, and the government, to meet their inflation and employment targets.

(Rather weird framing to suggest we all need to spend more.)

A potential source of additional demand discussed by the Committee included government spending being higher than currently projected, in view of the current strength of the Crown balance sheet.

Since there has been no suggestion from the government that it might depart from its Budget Responsibility Rules  (so the MPC isn’t responding to something in the wind) it looks strange for them to have chosen to include these lines (it is quite simply a choice).

The Governor’s own (apparent) left-wing pro-government biases also seemed to be on display in discussing existing government policy.  There was a whole paragraph about how government fiscal policy would be boosting GDP, and that paragraph ends with the observation that

No analysis was presented in support of this claim, and there is no discussion at all of the possibility that much higher minimum wages might have adverse employment effects.  Readers are just left to suppose it is all good.

The Bank is relatively upbeat in its GDP forecasts (quarterly growth rates averaging 0.8 per cent for the next couple of years) and one explanation appears to be their view of KiwiBuild.   The document notes that KiwiBuild is “assumed to contribute to residential investment from the second half of 2019”, and even though population growth is slowing, credit constraints appear to be tightening, and nothing new has been done to free up land-use regulation, the Bank expects to seeing residential investment rising as a share of GDP.

Readers may recall that at the time of the last MPS the Bank released a background note on its KiwiBuild assumptions.  I took them to task then over the unrealism of assuming that KiwiBuild would represent a material net addition to building activity (and that was before the growing questions about the KiwiBuild programme itself).  As I noted then

On my story, there could be as many builders and associated tradesmen and labourers as you like –  resources flowing easily, with high elasticities, into building as required, with barely any change in prices –  and over any reasonable horizon (say, five to ten years) a credible government announcement that it will build 100000 more houses will, to a first approximation, reduce the construction of other houses by 100000 over that period.    It almost has to be that way because:

In other words the marginal supply price of a new residential property –  like for like in its features –  doesn’t change.    Fix those things and there will be more effective demand for houses from the existing (and projected) population: building activity could really step for quite a while (and some of those capacity constraint and resource pricing issues could be relevant for a few years).    But if you don’t change any of those things –  and KiwiBuild doesn’t materially change any of them –  you’ll end up with no more houses, unless (and only to the extent) that the government-sponsored construction doesn’t cover true costs, and effectively offers a subsidised entry to the market for the favoured few.  Even then, the effect will mostly be to drive out more private construction, but there might still – at least for a time –  be a net increase in the housing stock.

I stand by those propositions, but the Bank appears to continue to assert/assume that KiwiBuild will be lifting economic activity.  Perhaps they are right, but they need to offer more analysis that a single sentence assertion.

Productivity isn’t one of the things the Reserve Bank can do anything much about (on that note, I really welcomed an interview yesterday in which I was being asked about the economy and the Bank, and when I mentioned the underwhelming productivity record the non-specialist interviewer responded “And the Reserve Bank can’t do anything about productivity, is that right?”).   But the Bank’s view on productivity growth affects its forecasts of headline GDP growth, which in turn are grist to the political mill.

Like Treasury, the Bank’s forecasts have been repeatedly upbeat and repeatedly wrong about productivity growth.  They always assume it is just about to pick up again.

In the Bank’s case the story is muddied because the variable they publish forecasts for is “trend labour productivity”.  On this measure – definition unclear –  we have had labour productivity growth averaging 0.8 per cent per annum for the last six years, and over the forecast horizon (to 2022) that is expected to increase to 1.1-1.2 per cent per annum.  There is never any discussion as to how or why this increase is expected to occur.

But lets look at a hard, easily replicable, measure of economywide labour productivity growth.  In this chart I’ve used the average of the two measures of GDP (production and expenditure) and the average of the two measures of hours (HLFS and QES) to derive an estimate of growth in real GDP per hour worked.  We have hours data up to and including the March 2019 quarter, and I’ve used the Bank’s forecast for GDP growth in that quarter (0.4 per cent). 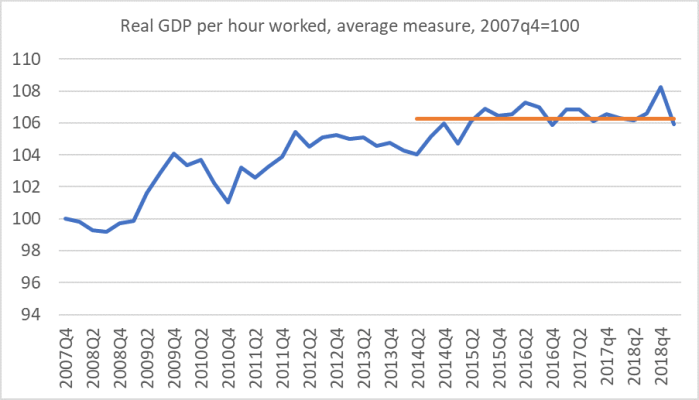 The orange line is the average for the last five years.  There has been almost no productivity growth at all.  Nothing in the data, or in government policy such as it is, suggests that is about to improve materially any time soon.  With little or no productivity growth it would be surprising indeed if annual GDP growth is anything like 3 per cent.

(And yet none of this stops the Governor burbling on about global inflation being low because of positive global productivity shocks.  The rest of the world’s story isn’t as bad as New Zealand’s, but it is hardly a story of strong and robust productivity growth.)

I was puzzling a bit over the MPC’s apparent interest in increased government spending.  Looking through the detailed spreadsheet of forecasts the Bank publishes I found they had forecasts for a variable they call “government spending (including non-market investment)”.  Out of curiosity I averaged the quarterly growth rates over the period from when the current government came to office (their first full quarters was q1 2018) to the end of the forecast period in 2022.  Recall that the Bank uses the government’s announced plans for their fiscal numbers.  Real government spending over the 4.5 years to mid-2022 is forecast to increase by an average 0.5 per cent per quarter.  Still curious, I calculated the average for the previous 4.5 years, under the previous government, and it was 0.7 per cent per quarter.  I don’t have a strong personal view on the appropriate level or rate of growth of public expenditure, but as a detached observer I’ve always been a bit puzzled as to whether left-wing voters really wanted to elect a government that would have government spending (share of GDP) so similar to that of the previous government, and growing more slowly. 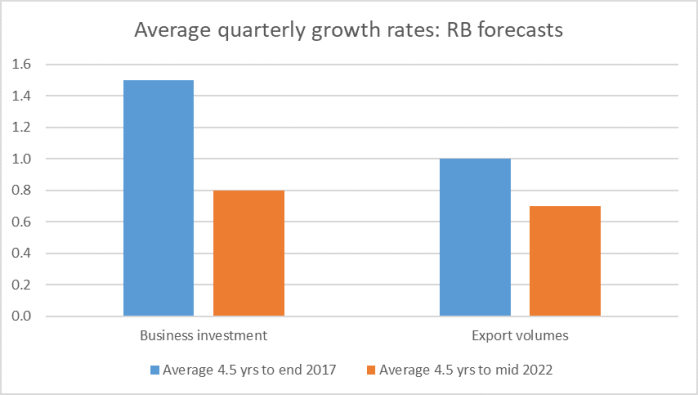 Not, among other things, the sort of picture one might expect to see if productivity growth were really about to accelerate.

My overall summary?  The OCR call was correct, but little about the analysis or communications the Bank has presented gives one much confidence in our central bank having a good understanding of the economy and its challenges, or the willingness/ability to communicate in a well-grounded dispassionate ways that genuinely sheds light on the issues.  The new MPC is still finding its feet –  one reason why I put little weight on yesterday’s projections as a guide to how things will unfold over the next few quarters –  but there is a big challenge ahead of them.