A week or so ago I wrote a post about our Police and their apparent indifference to the requirements of the law –  in this case the Official Information Act.  I’d asked about the appointment of their Assistant Commissioner Hamish McCardle to a visiting professorship at the PRC’s People’s Public Security University (the university of the Ministry of Public Security).  It was already well past the 20 working days limit specified in the Act and nothing had been heard from Police.

This morning I finally had a reply from Police’s (acting) International Services Manager,   There was not much to it, and (so they say) nothing was withheld.  First, I received a photo of a certificate of Mr McCardle’s appointment. 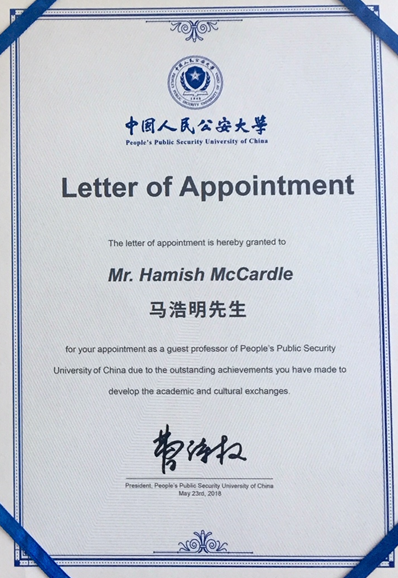 The appointment was made almost a year ago.

It probably should be a warning sign when the university of the Ministry of Public Security in a regime like that of the PRC recognises your “outstanding achievements”, but apparently it wasn’t to either Mr McCardle or his bosses.   In fact, in the photo included with the article on the Police website, Mr McCardle looks downright pleased.  Never mind the loss of liberty –  pretty much across the board –  that the Ministry for Public Security helps give effect to, the mass incarceration of Uighurs, and the persecution of all manner of other groups, it was apparently a great honour to be welcomed as (visiting) faculty at their training school.

The only other information related to my request that Police claimed to have was an email from the former International Services manager to three of his superiors, including the Deputy Commissioner and the Commissioner of Police.

Assistant Commissioner Hamish Mccardle has recently been appointed as a Visiting Professor at the Chinese Ministry of Public Security University.
This is a very rare honour, in fact Hamish is the first ever foreigner to have this honour bestowed. A bit like Massey University presenting President Xi’s wife an Honours Doctorate during the State visit a few years back.
This honour presents the chance to return each year to teach an advanced class of Masters students, about a one to two week teaching block. This role will have some great advantages in the overall relationship development with MPS and
New Zealand over the long term.

And that was it.  A “very rare honour”, “first ever foreigner”.  All with the utter moral blindness that sees no apparent difference between Massey University and the advanced training establishment of one wing of the domestic repression apparatus of a state like the PRC.  In fact, this ‘honour” is regarded as highly beneficial (“great advantages”) in improving relations between the New Zealand Police –   police force of a free and democratic, bound by the rule of law –  and the PRC Ministry of Public Security, in a country whose own Chief Justice eschews any notion of the rule of law or an independent judiciary.

Assuming that Police are telling the truth and this is really all there is, I find it pretty surprising.  There is no sign of Mr McCardle consultating with his superiors on whether to accept such an “honour” (indeed, my letter from Police says the appointment was done “independently of New Zealand Police”), even though this appointment was to involve a significant ongoing commitment of time.  There is also no suggestion of consulting with MFAT on whether it is a good idea for a senior New Zealand police officer to be accepting such an “honour” from a state like the PRC (and MFAT’s response to my OIA to them confirmed that they had no other material on this appointment), and there is also no record of Police notifying the Minister of Police or his office (“no surprises” and all that), or of the Minister of Foreign Affairs being informed.  Perhaps worst of all there is no sign that the Commissioner expressed any concern about being informed only after the event, or asked for any advice over whether such an “honour” was really appropriate, or whose interests it was serving.

As it happens, the Police covering letter also says that, a year on, “details of any engagement are yet to be agreed” (do note that “any”) suggesting that the symbolism here is more important than the substance –  a key ministry in the PRC, active agent in the suppression of liberties of Chinese citizens, managed to get a senior western police officer to accept an honour from them.   Probably the Gestapo had training establishments that in the late 1930s would happily have dished out visiting professorships or the like to gullible foreigners happy to associate themselves with an institution responsible for such evils.

When it comes to making sense of Police it is always hard to be sure whether malevolence or sheer stupidity/tin-earedness explains any oddities.    This is, after all, the Police Commissioner who had to apologise for giving the eulogy at the funeral of a former police officer found by a Royal Commission to have planted evidence.

Who knows quite what the story is with this episode.  But it probably shouldn’t really surprise us, given the way official Wellington falls over itself to accommodate – and more –  the PRC.    Almost as much as sections of the business community.  Between them, they seem to simply put all concepts of right and wrong, of concern for the oppressed, of recognition of the evil character of the regime they defer to, to one side.

Of course, it is all led from the top.   I listened to a recording of the Prime Minister’s addresss this morning to the China Business Summit (also addressed by the Chinese Ambassador and the local CEO of Huawei) on the Herald website. It seemed strangely apposite that her address –  on this recording –  was bracketed by adverts for the latest in Hauwei technology.   It was, in different ways, a speech both extraordinary and banal.  Banal because it was probably as empty, and as cravenly deferential, as you’d have heard from any New Zealand Prime Minister for the last decade (in fact, it seemed very like her address to the same forum last year).

And yet extraordinary too for the utter emptiness of it all, in the face of a regime that poses such substantial challenges to the world, including its intrusion in our own political system.   Listen to the Prime Minister address the China business vested interests and you’d not know that issues around Huawei remain alive and serious (just the other day Vietnam banned Hauwei), you’d not know there were serious issues with state-sponsored intellectual property theft, with threats to Taiwan, the increasing loss of liberty in Hong Kong, expansionist activity in the South and East China Seas.  Nor, of course, issues like Xinjiang, the sustained persecution of Christians who won’t bend the knee to state-sponsored “churches”, or the forthcoming anniversary of the massacre of Tiananmen Square (no doubt airbrushed completely from PRC media, but I wonder if any of our political leaders will be moved to comment at all).  And as reminder that it seemed to be all about dollars, the Prime Minister reminded the assembled business figures that the government had nine agencies represented in being “there to serve your interests” –  it was that “your” that sparked me interest, no sense of “our”.

Of course, there was the obligatory brief and embarrassed note that we don’t always agree with the PRC, but that “differences of perspective don’t define our relationship”.  But they really should shouldn’t they, with a regime of such evil, with values so alien to those of most New Zealanders?  Of course, we have differences with every other country at some time or another, but with some we share fundamental values, and with others we just don’t.  The PRC is one of the latter, and yet the PM was again on her mission to treat the PRC as just another country, its leaders just another group of decent blokes (in their case, they are all male).  You can’t escape the impression that she is happier photographed with Xi Jinping than with, say, Donald Trump (and I don’t blame her at all for not wanting to be photographed with Trump, but the government he leads is not the PRC).  And yet, for all its faults, the US Adminstration is actually willing to speak up and speak out about the mass incarceration in Xinjiang

Perhaps it is no wonder Police not only accept this “honour” but celebrate it in their magazine.   When it comes to the PRC, they seem to take a lead from the Beehive, where successive waves of ministers seem devoid of any moral grounding.

When they ponder those deals and donations, and all the squalid compromises involved, perhaps our politicians, officials and business figures might ponder that old Scriptural line

For what shall it profit a man, if he shall gain the whole world, and lose his own soul?

5 thoughts on “A certificate of shame”