Skip to content
HomeDestroying the economy in one fell swoop

When I got to page 7 in this morning’s Dominion-Post I wasn’t sure at first that my eyes weren’t deceiving me.    I read it again, and even then wondered if what I was reading was a typo.  But these people seemed to be deadly serious. 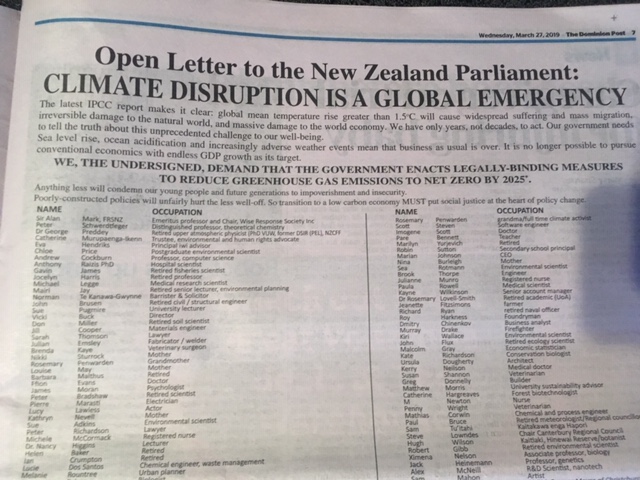 Their demand is there in bold: that the government take steps to reduce (net) greenhouse gas emissions to zero by 2025.  Their demand doesn’t appear to be conditional on other countries doing anything.  It is simply flagellation –  but not self-flagellation (in which these individuals themselves commit to reducing all direct and indirect emissions associated with their own consumption and production to zero by 2025)  but a brutal whipping delivered to everyone.   Not even our government, evincing no concern for productivity or for lifting the performance of the underperforming New Zealand economy, would be that stupid or (electorally) suicidal.  (In fact, that left me half-wondering if this was really intended as a piece of political theatre –  get together a group advocating something so recklessly stupid and costly that the government’s own proposed net-zero by 2050 target will seem moderate and reasonable.   But many of the names of the petition –  a couple of hundred visible in the advert, and another 2000 or so who’ve signed –  appear to be “true believer” types.  And all their rhetoric suggests they are in deadly earnest.)

It all comes complete with the typical zealot’s demand –  “this is no time for party politics” (further down the advert) –  as if their propositions (and time frames) were so self-evidently (or by revelation) true, that no further debate should be countenanced.  End of story.   And yet, perhaps not surprisingly, of the key figures in this organisation one is the former leader of the Green Party and another is a former Greens Regional Councillor (I didn’t recognise the other names, but it wouldn’t surprise me if a quick search revealed other strong Green Party ties).  Green Party politics is just fine it seems, but not anyone else’s?

It is now March 2019.  That means these crusaders claim to seriously believe that in just six (and a bit) years we should reduce all (net) emissions to zero.  Sure, the trees that are already growing will offset a bit, and a few more trees will be planted in the coming years (but any tree planted today is still going to be rather small in 2025).    The offsets (the LULUCF bit) just don’t make that much difference (as this MFE chart illustrates).

They seem to be calling for probably a 70-75 per cent reduction in gross emissions (animal, energy or whatever) in a mere six years.  Being true believers I presume they will also be wanting international air (and sea) travel emissions –  which aren’t included  in the official framework but are just as polluting  –  radically slashed in six years.

I noticed in their advert a comment that “Solutions DO exist”, so out of curiosity I looked up their website.    Here is the Deeper Thinking section.  From the introduction

We will not accept action on climate change that further increases inequality, takes away democracy [but it was “no time for party politics”?], destroys our natural ecosystems, or compromises human rights. Some scientists think they can geo-engineer the planet by blocking the sun or changing the chemistry of the oceans. That is not our vision. In fact, this kind of change will make it even more difficult to reduce emissions.

We need a change of values that puts the everyday rights and needs of people before the profits of corporations. A change that values Nature, and respects its limits. A change that truly honours Te Tiriti o Waitangi, by which we mean recognizing the holistic world views of tangata whenua, their perspective of being intrinsically connected to the earth, the role of mana whenua in discussions and decision making, and the importance of environmental integrity to the health and wellbeing of communities who sustain themselves from it.

Make of that what you will.

There was a promise that one day (before 2025?) their website will have some more concrete material on “better alternatives”, but it isn’t there yet.  In fairness, they do finally mention economics.

Climate change is about economics. That is why it is hard. It is not possible to address climate change without changing our economic system. Resources and the ability to absorb pollution are limited. We cannot keep growing the economy without growing environmental damage. Much has been written over the last 40 years about the economics of ‘enough’ rather than ‘more’ which can give us a better way of life with less damage to the climate, the water, and each other. Aiming at human wellbeing rather than industrial growth, accepting the limits of nature and natural resources and valuing things other than just money is the basis.

Take that third sentence.  It would probably be better, and more honestly, reframed as “it is not possible to cut gross emissions by 70 per cent in six years, especially when half your emissions are from animals, without destroying New Zealand’s economy, severely undermining material living standards and [see the first block of their text], and (most likely) materially increasing inequality”.  But, perhaps, the signatories would feel better.

So what would this involve?  Well, first it would almost destroy our tourism industry (and our export education industry), which relies on air travel, and where there are as yet no commercially viable replacements for emitting fuels.   Then it would destroy our pastoral industries –  animals emit and, whatever the technological innovations, will still substantially be doing so six years from now.

I presume the signatories have dreamy visions about electric cars, trucks, and trains.  But, as of now, almost the entire stock is powered by petrol or diesel.  What do they propose?  Confiscation of all existing vehicles, with or without compensation?   And while it is fine to talk up the possibilities of wind (and the dreadful visual pollution it entails) or solar, we’ve yet to see anywhere the sort of (economic) large-scale battery storage deployed in ways that suggest a quick replacement of the full fleet is in any way sensible, or economic.   Many of us –  old fogies like me, but more importantly poor people – don’t want to buy new vehicles, which are very expensive (petrol or electric).

Presumably much of the building and construction industry is also a gonna –  a lot of emissions involved in producing cement.   That will be a bit of an issue in a country with one of the fastest population growth rates in the advanced world.   Perhaps raupo cottages are an alternative?

One is rather left wondering how New Zealanders earn their way in the world –  literally, profitable activities competing on world markets –  in this vision.  It wouldn’t “just” be a matter of sustaining growth –  a concept that seems distasteful (at best) to these people –  but of sustaining even the material living standards we have now, which lag well behind those in leading advanced economies (and thus constraining all sorts of personal and government choices).  Run through a list of New Zealand exports, and there won’t be that much left (a bit of wine, some fruit, a few services (ones that don’t rely on consultants jetting in to other countries, and……?).  I guess the exchange rate would plummet, but –  given the constraint of zero net emissions –  it is hard to see what viable new outward-oriented business would be likely to spring up here, so far from the rest of the world (and distance means, among other things, emissions).

The current government has talked of a commitment to a net-zero by 2050 target (although after their consultation process we have yet to see the final form of that commtment).  I wrote last year about the potential economic consequences of adopting such a goal, drawing mainly on the NZIER work commissioned for the consultation process by the Ministry for the Environment themselves.

The Minister for Climate Change has made the public claim that his net-zero target (by 2050 –  which would give us six times as long to adjust) would be a “massive economic boost“.    But that isn’t what the NZIER modelling showed.  This quote is from the government’s own consultative document

The analysis by NZIER suggests that GDP will continue to grow but will be in the range of 10 per cent to 22 per cent less in 2050, compared with taking no further action on climate change.

As I noted at the time

Those are breathtakingly large numbers (future GDP gains) for a government to simply propose walking away from.

The hair-shirt the government proposed to compel all to wear was going to be astonishingly costly.

And then there were the (in)equality implications.  Recall that this was for a net-zero target by 2025 (still 31 years away, not six).

In my previous post, I quoted the MfE text

Our modelling suggests the households that are in the lowest 20 per cent bracket for income may be more than twice as affected, on a relative basis, than those households with an average income.

Which is quite bad enough. But it is all the more stark when you see the chart in the NZIER report, drawn from some work done for them by Infometrics  (in this chart they are looking only at the additional estimated losses from moving from the 50 per cent target to a net-zero target). 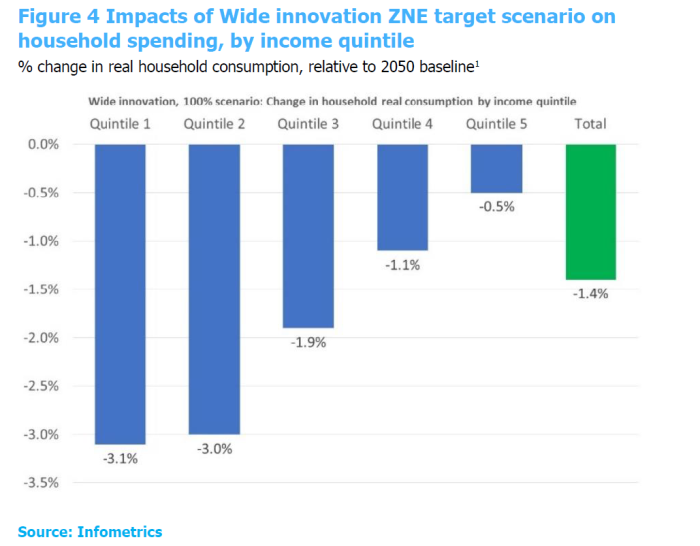 Specifically, people in the bottom two income quintiles will be hit six times as hard as people in the top quintile.    Like MfE in the consultation document, NZIER rush to the client’s defence and suggest that redistribution policies could alleviate this.   You wouldn’t thought that sort of advocacy was their role –  having been commissioned to do modelling –  but more importantly, they should know as well as anyone that when governments adopt policies to materially shrink the economy, it is even harder than usual to persuade voters in the upper quintiles to agree to give up even more to mitigate the losses the worst off are exposed to.   Redistribution tends to win more favour when everyone is getting better off.

But, never mind, I guess, the signatories will feel better, and it is –  so they tell us –  no time for party politics.  Just destroy material living standards with one fell swoop, no doubt hoping –  with the best of intentions no doubt – that something will turn up.

(Of course, if they were at all serious about doing all this, in a way that hurt New Zealanders least, among their policy prescriptions would be a sharp and permanent cut in immigration numbers.  I made that case to the Productivity Commisson inquiry.   But since the Green Party also likes to position itself as the equal-top most pro-immigration political party, one can only assume –  again –  that the point of the exercise, in practice (whatever their best intentions) is to maximise the pain of the sort of adjustment they propose.  Flagellation in other words.)

61 thoughts on “Destroying the economy in one fell swoop”