In one of the world’s most prominent economics platforms, the economics columnist for the Financial Times, Martin Wolf uses this week’s column for a piece headed “Monetary policy has run its course”, with a subheading “It has made secular stagnation worse.  Fiscal alternatives look a safer bet.”.    That headline was guaranteed to get my attention, disagreeing as I do with all three limbs of the apparent argument.

Wolf draws on various other papers, but doesn’t really make his case in a compelling way.  Take secular stagnation first.  There are various definitions: Wolf uses one of “chronically weak demand relative to potential output”, while the FT’s own lexicon uses a materially diferent version

Secular stagnation is a condition of negligible or no economic growth in a market-based economy.

On the former definition, most of the OECD is estimated to be back somewhere near a zero output gap, and the unemployment rate now in several major economies (but not New Zealand) is lower than it was going into the last recession (and there is a striking fact that the worst performers are all in the euro common currency, a system Wolf tends to be keen on).  That has happened without big new surges in overall ratios of private debt to GDP.

On the latter definition, even in countries with high starting levels of productivity, productivity growth has slowed but not stopped.  Per capita GDP across the OECD is now about 10 per cent higher in real terms than it was in 2007.  Not stellar, but it means that 10 per cent of all the output growth managed in the last several hundred years (since the Industrial Revolution) has been in the last decade alone.

I think there are credible stories under which monetary policy wasn’t used sufficiently aggressively in, and following, the last recession –  partly because both markets and central banks misjudged things and expected a strong rebound, so were always looking towards the first (or subsequent) tightenings.  But is very difficult to construct a story, in which monetary policy has made any material (adverse) difference to population growth, productivity growth, actual innovation opportunities or the like.    And even if, for argument’s sake, there was some effect in the frontier economies, most OECD economies (including large ones like the UK, Japan, Italy, Spain, Canada, South Korea) are nowhere near the frontier.

Having said that, there is little doubt that neutral real interest rates have fallen away very substantially over the last 15 years or more.  They are now at levels that are pretty much without historical precedent.  This is the first chart in the article. 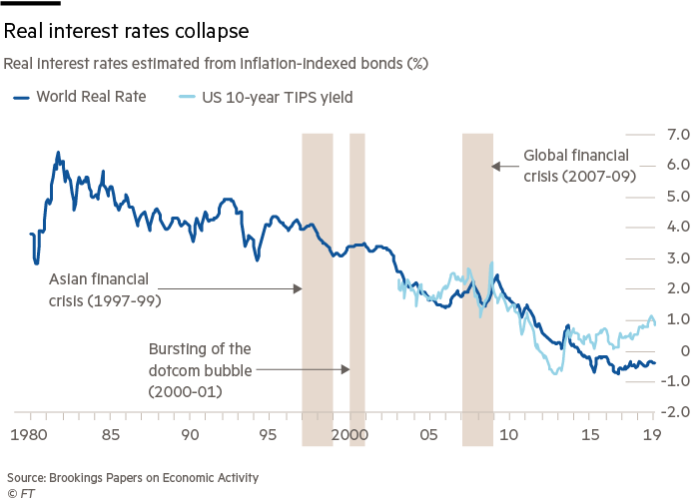 That means there are issues.  There is an effective lower bound, at present, on short-term nominal interest rates.  No one knows precisely where that bound is, but there is a degree of consensus that taking your policy interest rate much below -0.75 per cent will lead to fairly large scale conversion of deposit balances into physical cash (not, primarily, transactions balances –  where the inconvenience would dominate – but large wholesale balances).  The limit now exists wholly and solely because (a) governments monopolise physical currency issue, and (b) pay zero interest on physical currency.  Zero might not be much, but for a multi-million dollar fund, it is a lot more than -3 per cent (for the same credit risk).

Quite a few countries (including the euro area) are at or very near that floor already.  Other countries, including New Zealand, Australia, and the United States are not.   But even in those countries, a severe recession in the next few years would be likely to exhaust conventional monetary policy capacity (our Reserve Bank could cut by perhaps 2.5 percentage points, but it has often needed to cut by more than 5 percentage points in previous downturns).

Wolf isn’t apparently keen on doing anything about that, observing that a need for materially negative nominal official interest rates

would, to put in mildly, create a wasps’ nest of technical, financial and political problems.

Not nearly as many problems as doing nothing, and allowing persistently high unemployment for multiple years might create.

There are two broad options for creating more monetary policy space.   The first is to raise the inflation target (and reading a central banking magazine yesterday I noticed that a Swedish Deputy Governor is calling for exactly that), and the second –  and more reliable –  is to remove, or markedly ease, that near-zero effective lower bound.   No government or central bank has done so (and there are not overly complex ways of doing so), and that passivity –  apparently endorsed by Wolf – is increasing the risk of problems when the next serious downturn gets underway.  If interest rates can’t, for now, be cut far, people will quickly recognise that, not expect it, and adjust their behaviour, and asset holdings, accordingly.

Is there reason for unease about some of these options?  Perhaps.  If we were to allow short-term interest rates to go materially negative, no one knows how far they might eventually go.  There are good theoretical reasons to think not too far (human innovation hasn’t died, there are naturally productive (positive returns) assets (land or fruit trees) but no one knows with certainty.  Would it matter if interest rates went, and stayed, materially negative?  I’m not convinced it would, allow it would certainly be a symptom of something odd.   But such philosophising shouldn’t get in the way of actively preparing to handle the next serious downturn.  Neither central banks nor governments seem to be doing what they could on that score (and although the issue is a bit less immediately pressing in New Zealand, it is true here too).

Which brings me to the third limb of Wolf’s argument: “Fiscal alternatives look a safer bet”.   “We need more policy instruments he argues”.  In many respects, the rest of the article is a teaser for a conclusion around more aggressive use of fiscal policy.   (“More aggressive? perhaps Antipodean readers wonder, but as a chart in the article illustrates OECD net government debt as a share of GDP has trended quite strongly upwards in the last fifty years as, generally, has government spending.).  He asserts boldly:

If the private sector does not wish to invest, the government should decide to do so.

And yet who is “the government”, except a collective representation of the voters, themselves “the private sector” in one form or another.  There is no sense of trying to understand why the private sector might not choose to invest more heavily and then, if those things are in the gift of governments (tax, regulation, policy uncertainty or whatever), fix them.

And nothing at all on the near-certain “political problems” and constraints around the large scale and persistent (for it is something structural he is championing, not just a short-term cyclical response) aggressive use of fiscal policy, whether for consumption or investment.  Monetary policy has its problems, but if central bankers and politicians got on and fixed some of the regulatory (lower bound) obstacles, it would be a much more reliable tool to deploy.   At worse, even left-wingers (such as Wolf, and the Democratic economists he cites –  Laurence Summers, Olivier Blanchard, and Jason Furman) should want to have monetary instruments to hand, rather than some all-or-nothing wager on fiscal policy, when there is no political consensus at all (anywhere) on using fiscal policy in the ambitious way they suggest.

Wolf is right that central banks can’t deal with structural secular stagnation –  although they can do the important job of leaning against serious cyclical downturns, as they did in 2008/09. But even on the most optimistic of readings, it seems unlikely that aggregate fiscal policy is going to be able to either, whether for technical or political reasons.  And so-called secular stagnation should simply not be regarded as an acceptable excuse for poor productivity growth and weak investment in countries that are far from the productivity frontier, New Zealand pre-eminent (for how far it has drifted behind) among them.