I don’t usually see the National Business Review but a copy of the latest issue turned up at home and I flicked through it on Saturday afternoon.  On page 2, I found a very strange article, in a column called (Tim) “Hunter’s Corner”, about health funding and (in particular) the application of the “capital charge” to DHBs.  It is, we are told, a “knuckleheaded approach” and should, in Tim Hunter’s view, be abolished.

Capital charges have been around for a long time now, since 1991 in fact.  Here is one description

The charge is levied on the net worth (assets minus liabilities) of departments and some Crown entities. The assets are assessed on the basis that they are valued in financial statements and may include buildings and other fixed assets, cash appropriated for depreciation or held as working capital, inventory, or receivables. The capital charge represents the opportunity cost of money – what the government can expect to earn in alternative investments entailing similar risk. It may be thought of as an internal rate of return on the government’s investment in its own entities.

and here is one articulation of the point of the charge

The capital charge has a dual purpose: it signals that capital is not costless and should be managed as would any other cost of production, and it spurs managers to include the cost of capital in comparing the cost of outputs produced by government entities with the cost of obtaining the outputs from outside suppliers. The charge puts internal contracting on the same footing as contracting out and encourages full cost recovery of outputs sold to governmental or private users.

It has always seemed eminently sensible to me.  Don’t charge for the cost of capital and government agencies will be incentivised to use lots of it, and to do things themselves that might be more efficiently provided by private sector firms (whose owners will, reasonably enough, expect to cover the cost of capital).   Without a capital charge, any hope of limiting those tendencies requires (even) more centralised adminstrative edicts.

I couldn’t see any information on The Treasury’s website about the current rate of captial charge, so I’ll take Mr Hunter’s word for the fact that it is “typically about 6-8%”.    Eight per cent (nominal) is the standard discount rate Treasury recommends for project evaluation.

So what bothers Mr Hunter?  His article seems to imply that capital charges squeeze the funds available to deliver health services to the public.  Waive them and suddenly DHBs will have more money.  Except that, were capital charges to be scrapped, one would expect to see an entirely-commensurate drop in central government funding to DHBs.  Of course, the Crown could decide it wanted to spend more on health service delivery but logically that is a quite different decision.  One can increase health spending with or without the capital charge.  All else equal, just scrapping the capital charge would increase the overall government deficit, and it would weaken the incentives in government agencies for capital to be used wisely and abstemiously.  Crown capital costs –  and that costs fall on citizens and taxpayers.

Indeed, and so long as the capital charge is designed reasonably well, that is a feature not a bug.  Recall that the purpose was to help efficiently allocate resources and not artifically favour in-house solutions.

Getting still more specific, he goes on to argue that

It has to be pretty worrying that a senior business journalist thinks an appropriate measure of the Crown’s cost of capital is the rate it can raise debt at.

Just as for any private sector entity (businesses most obviously, but the concept applies more broadly), the cost of capital is better represented by some weighted some of the cost of debt and the cost of equity.    That is what The Treasury is trying to mimic in its recommended discount rates (and, I assume, in calculating rates of capital charge).  You can see the various assumptions (including the equity risk premium and leverage) laid out at the link.

The fact that the Crown doesn’t pay dividends and isn’t listed on the stock exchange doesn’t change the fact that equity capital has a cost.   When the government takes our money – and that is how the government raises equity, coercively through the tax system –  we can’t use that money for other things.   As citizens we, presumably, expect them to use that money wisely, and at least as well (for things at least as valuable) as the alternative options we have open to us.  Opportunity cost matters.    And, of course, the Crown’s cost of issuing debt isn’t just kept modest by the actual equity the Crown has accumulated, but by the ability of the Crown to raise our taxes whenever necessary to service the debt.   Lenders know that; in fact, they count on it.   And yet in evaluating state projects that option cost (to citizens) isn’t internalised.

I wrote a post a few years ago on the question of what price we should put on government projects.  Here are a couple of key paragraphs.

The Reserve Bank of Australia recently ran an interesting and accessible Bulletin article on the required hurdle rates of return that businesses use in Australia.  They report survey results suggesting that most firms in Australia use pre-tax nominal hurdle rates of return in a range of 10-16 per cent (the largest group fell in the range10-13 per cent, and the second largest in a 13-16 per cent band). Recall that nominal interest rates in Australia are typically a little lower than those in New Zealand, and their inflation target is a little higher than ours.   In other words, it would surprising if New Zealand firms didn’t use hurdle rates at least as high in nominal terms as those used by their Australia peers.     The RBA reports a standard finding that required rates of return were typically a little above the firms’ estimated weighted average cost of capital. The literature suggests a variety of reasons why firms might adopt that approach, including as a buffer against potential biases in the estimated benefits used in evaluating projects.

As a citizen, it is not clear why I would want to government to use scarce capital much more profligately than private businesses might do. I use the word “profligately” advisedly – using a lower required rate of return puts less value on citizens’ capital than they do themselves in running businesses that they themselves control.  And if the disciplines of the market are imperfect for private businesses (as they are), the disciplines on public sector decision-makers to use resources wisely and effectively are far far weaker. Fletcher Challenge took some pretty bad investment decisions in the 1980s and 1990s: its shareholders and managers paid the price and the firm disappeared from the scene (along with many more reckless “investment companies”). The New Zealand government, architect of Think Big debacle, lives on – citizens were the poorer, but ministers and officials paid no price. 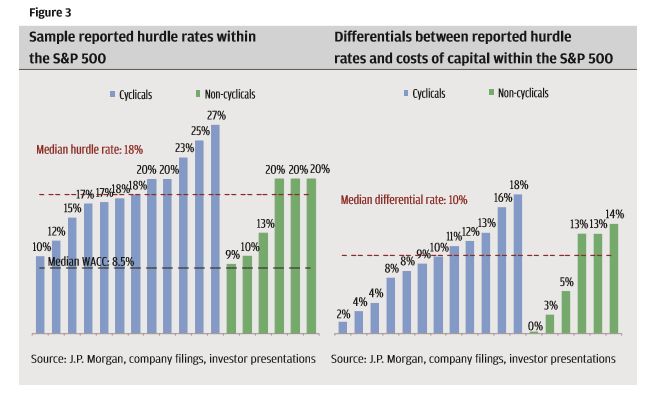 If anything, there are several reason why governments should be using higher discount rates than private citizens would do:

The last of those isn’t really relevant to use of capital in the health sector, but the other two certainly are.  They represent what looks like a pretty good case for requiring something well above 8 per cent to used in evaluating public sector capital projects, both when seeking new funding from the government, and when making ongoing management choices within organisations.

Note that none of this is about taking a view on the appropriate level of health services the public sector should provide, it is simply (but importantly) about helping to get closer to recognising the true costs and risks associated with the capital devoted to funding these services.

There is no perfect system for allocating capital, whether within a private multinational company, or within a government.  “Perfect” is never the relevant benchmark.  But if the capital charge regime isn’t perfect –  and that is almost inevitable –  we are materially better off with it than without it.   I hope the Minister of Health pays no attention to the siren call from Tim Hunter to scrap capital charges, at least as they apply in the health system.    There is probably a stronger case to scrap DHBs themselves, but even if that were done much the same challenges around the efficient use of capital, getting the best mix of labour and capital, would still face health system managers and those funding them.   Capital costs, and those (true) costs are quite high, especially when politicians and public officials are making the decisions, and rarely face sufficiently strong incentives to utilise capital as efficiently as possible.