Skip to content
HomeBridges and the State of the Nation

I mostly went looking for the text of Simon Bridges’ “state of the nation” speech yesterday to see if there were any signs, at all, that the Leader of the Opposition was going to confront New Zealand’s appalling productivity growth performance.   He had, after all, been Minister of Economic Development only 18 months ago.  There weren’t.

I’ll come back to economic performance and economic policy later, but the rest of the speech had some interesting snippets.

There was a long section on law and order.  There was plenty of rhetoric but one line in particular caught my eye

I am determined that under the next National Government, New Zealand will become the safest place to live in the world.

Wow, I thought, that sounds like a bold promise.  I don’t carry crime data around in my head, so I went looking.   Reporting and collection differences muddy cross-country comparisons of the incidence of crime, and for a full comparison you’d want to look at the full gamut of violent crime, theft and so on.   But the most comparable data across countries is that for the homicide rate.   Here are the homicide rates (per 100000 people) for advanced countries, using UN compilations of data.

Dreadful as any intentional homicide is, New Zealand doesn’t rank too badly, just a bit better than the median of this group of countries.  But Simon Bridges says that under the next National government, New Zealand will be the safest country in the world.   Say they come to office next year, and are in office for nine years.  That means he thinks that within ten years, they can take steps that will lower New Zealand’s intentional homicide rate by just over two-thirds, to match the record in places like Singapore, Japan and Luxembourg. 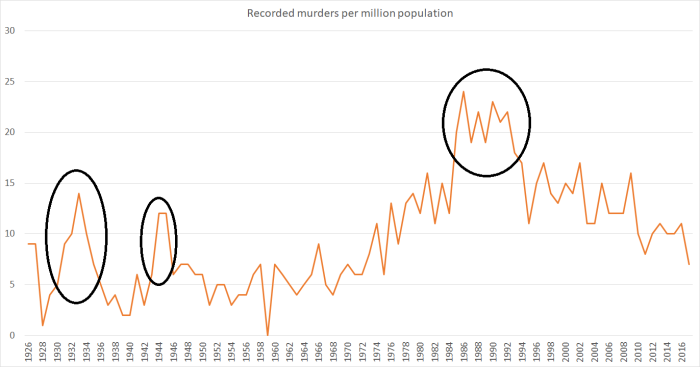 Cutting our murder rate by more than two-thirds would involve getting, and keeping, it, down to the very lowest individual years managed in the last 100 years or so.   It would be laudable goal…….at least if Mr Bridges had any serious and plausible ideas about how to do it.  And the sort of change that really would support, over time, a much lower prison population.   Fifteen murders a year would still be fifteen too many, but even that seems like a tall order, even with an ageing population.  Mr Bridges promises that National will “continue to put forward the ideas” between now and the election to make his “safest place to live in the world” vision a reality.  Count me a bit sceptical, but I’ll watch with interest to see if there is some substance there.

The headline from the Bridges speech was around the promise to index the income thresholds in the tax system.  It would be a welcome, but well overdue, reform if someone finally does it.  But I wondered about some of the details.  This is how Bridges explained what they are proposing.

We will amend the Income Tax Act to make sure income taxes are adjusted every three years in line with the cost of living.

Within a year after every election, Treasury will advise the Government on how much the tax thresholds should be adjusted to account for inflation.

That means income tax thresholds will increase every three years to stay in line with the cost of living.

We will include a veto clause so the Government of the day can withhold the threshold changes in the rare circumstances that there is good reason to do so.

But it will have to explain that decision to New Zealanders.

(a) adjust the thresholds every year, and

(b) adjust them automatically, with the formula written into the Income Tax Act?

After all, we manage to adjust (for example) NZ Superannuation rates automatically each year.

One of the arguments for indexing the thresholds is to reduce the ability of politicians to use occasional adjustments to present themselves as giving a tax cut.  The Bridges model –  adjustments only every three years, and only on the basis of the Minister of Finance responding to a Treasury recommendation – still seems to keep too much of that potential intact.  Adjusting for inflation will be in ministerial gift, not simply an automatic calculation routinely notified to taxpayers (according to legislative formula) by the Commissioner of Inland Revenue.

I’m also uneasy about this idea that the Minister could reject a specific  indexation recommendation.  First, if the adjustment were being done annually, the amounts involved are so small there could be no compelling reason not to proceed (with triennial adjustments the amounts get chunkier). And, second, we don’t apply this approach to (say) New Zealand Superannuation payments.  What the statutory formula says goes.

If a government thinks there is a persuasive case to raise tax rates –  and from time to time that may be necessary or appropriate –  they should be willing to come to Parliament and make the case in an open and transparent way.  That is, for example, what they have to do if they want to lower (real) NZS payments.    Inflation shouldn’t be able to be used to be used as a silent cover, enabling governments to grab more (real) revenue.

And then there was the economy.  Simon Bridges devoted a lot of space to it in his speech but there was very little serious content.  What it all boiled down to was:

(a) when we were in government our economy was a rockstar (he doesn’t use the word, just ‘one of the best performing in the developed world’)

(b) Labour is raising taxes

(c) Labour is doing wasteful spending (fee-free tertiary education and the the Provincial Growth Fund), and

(d) National would reverse the Auckland fuel levy, and any capital gains taxes, and not increase other taxes in a first term.

(It was notable that despite the talk of wasteful spending –  with which I agree with him on the specifics –  there were no promises to unwind those measures.)

And that’s it.  There was no suggestion of an economic reform strategy –  not even ideas to come –  or even a need for one.  Things would, it appears, be fine if only we had lower (Auckland) petrol taxes and no capital gains taxes.

So, as an aide memoire for Mr Bridges and his economic team, lets remind ourselves of some key New Zealand data.  I ran this table a couple of weeks ago

When Mr Bridges’ parents were young, New Zealand was still among the very richest and most productive countries on earth.    His children are born into a country where average productivity levels are barely 60 per cent of those in the top tier of the OECD.

And what happened under the government in which he was, by the end, a senior minister.

Barely any productivity growth at all in the last five or six years (and allowing for the lags, and the fact that the current government has done little, the most recent year’s data reflects those some policy frameworks and choices).  We dropped further behind Australia over the last decade, and various eastern European countries –  never previously close to us in the last 150 years –  are either snapping at our heels or overtaking us.   Well done them.  Shame on us (and the succession of governments and oppositions).

Successful economies tend to trade a lot with the rest of the world.  Early in their last term, the National Party in government knew this –  reflected in the (slightly wrong-headed) targets for much higher exports as a share of GDP).   Here is the actual and forecast data (for exports –  the import chart isn’t that different) from the most recent Treasury HYEFU.

Foreign trade as a share of GDP has been shrinking this century – under both National and Labour governments –  and nothing Treasury can see suggests that underperformance is about to be reversed.

But in two pages of speech text about the economy there was not a mention –  not even a hint – of any of this.  Of course, none of this is as immediately topical, or offering political mileage, as a possible capital gains tax.  But a serious leader might at least be able to point to the need to do so much better on the economic performance –  material standard of living – front.

It is only about 19 months until the next election.  Sadly, there is no sign from this speech that a future National goverment would be any more serious about reversing our relative economic decline than their predecessors –  of whatever stripe –  for the last 25 years.  Worse still, they seem to have given up believing there even is an issue.

57 thoughts on “Bridges and the State of the Nation”