There seemed to be a little in this week’s CPI numbers for everyone.   The Reserve Bank’s favoured core inflation measure was unchanged at 1.7 per cent (and the model slightly revised downwards the estimate for a couple of quarters back), bringing up now a full nine years in which this core measure has been below 2 per cent.   The CPI ex food and energy series –  a standard international core inflation indicator –  doesn’t get much attention in New Zealand, but annual inflation in that measure was (up a bit) 1.6 per cent.  The last time that inflation measure was above 2 per cent –  excluding the GST change –  was late 2007.  That was so long ago, there will be voters in next year’s election who don’t even remember 2007.

New Zealand inflation measures –  even the sectoral core measure –  are biased upwards these days by the repeated large increases in tobacco taxes.  The price indexes rise as a result, but these tax increases aren’t what economists typically think of when they use the term “inflation”.     Neither Statistics New Zealand nor the Reserve Bank publish a decent core measure that also excludes government charges and tobacco taxes, so I’ve come to quite like the series SNZ does publish for non-tradables inflation excluding government charges and cigarettes and tobacco.  Here is the annual inflation rate in that series. 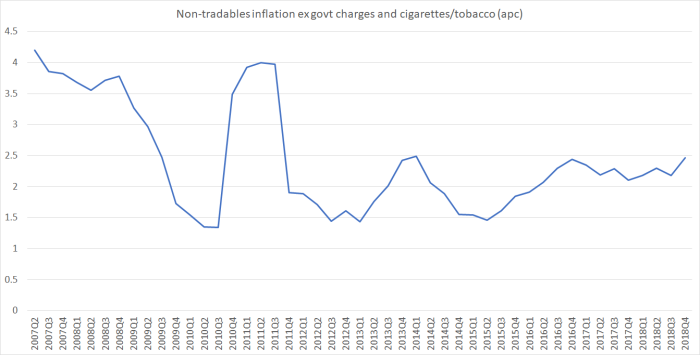 The annual inflation rate in this measure did pick up a little, but (a) is no higher than the last couple of local peaks, and (b) even 2.5 per cent core non-tradables inflation just isn’t consistent with core overall inflation being back to 2 per cent.   The Reserve Bank was still cutting the OCR in late 2016 when this particular inflation rate series was around current levels.

What about the wider world environment?  Here is CPI ex food and energy inflation for the G7 group of countries. 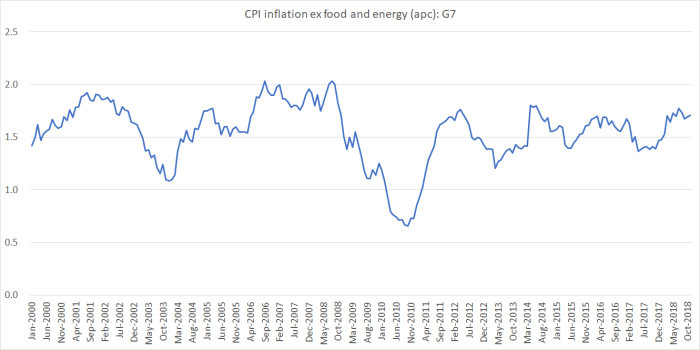 And all this is against a backdrop in which both the world economy and New Zealand’s economy seem to be losing steam.      The pick-up in the sectoral core factor model measure of inflation to 1.7 per cent in the last couple of quarters might be “encouraging” in some sense, if one could readily point to factors that were likely to intensify resource pressures from here, or drive up perceptions of a “normal” or natural inflation rate.  But….the Christchurch rebuild is winding down, immigration seems to edging down, and the terms of trade show no sign of moving to a new higher plateau. There is no fresh wave of productivity growth, inducing firms to invest heavily, and encouraging consumers to spend in anticipation of future higher living standards.  If you believe in housing wealth effects (I don’t see any evidence in aggregate for them), even house price inflation has faded.   There is some fiscal stimulus in the pipeline, but it is nothing like some of the positive demand shocks we’ve gone through in the last 10 or 15 years.  This has the feel of being about as “good as it gets” (thoroughly lousy when contemplating productivity, but here I’m just thinking of capacity pressures, and things which might boost core inflation).

And it isn’t too different abroad.   Global growth projections are getting revised down a little: in the US fiscal stimulus is fading and monetary tightening is beginning to bite, in the euro-area activity indicators are weakening (and add in some Brexit uncertainty on both sides of the Channel), and in China things don’t seem to be developing well.  Commodity prices were a big worry at the end of the last boom, in 2007 into 2008 –  concern about spillover into inflation expectations and wage demands – but not so much now.  And it isn’t as if global monetary policy has suddenly got a lot looser either.  There just isn’t much reason to think core inflation –  here or abroad –  is likely to rise further, and neither here nor in most countries abroad is inflation at target.   When the next recession comes, core inflation is likely to fall from here.

The market doesn’t seem convinced that there is higher inflation in prospect either.  Breakevens from the indexed and conventional government bond market have been falling in other countries.  And here is the New Zealand picture, updated so that the last observation in this monthly chart is yesterday’s data.

In the US, at peak, markets were pricing future inflation averaging a touch above 2 per cent.  Here we never quite got even to 1.5 per cent, and in the last couple of months the breakeven inflation rate (implied expectation) has dropped away again.  People putting real money on these things are implicitly pricing the average inflation rate over the next 10 years in New Zealand at 1.1 per cent.   That seems too low to me, even allowing for an excessively cautious central bank over the last decade (and hardly a vote of confidence in the amended Reserve Bank legislation passed last month), but even if you are sceptical of the level, the direction should be troubling the Governor (and his associates just about to be appointed to the new Monetary Policy Committee).   There doesn’t seem to be any sense any longer that a normal inflation rate in New Zealand is 2 per cent. (My thoughts on making sense of the indexed bond numbers are here.)

It is clear that, with the benefit of hindsight, the OCR should have been a bit lower over the last couple of years.    That is simply the same as observing that core inflation has again undershot the target (and implied expectations suggest that outcome isn’t simply an anomaly).    That isn’t the same as recommending now that the Governor should cut the OCR at next month’s review – and I’m quite he won’t anyway.   There is a reasonable case to be made for a cut now – low inflation, growth pretty insipid etc, tempered by the fact that the unemployment rate (a lagging indicator) is probably around the NAIRU –  but the cautious bureaucrat still lurking in me probably wouldn’t yet go that far.  But the case for a more explicit easing bias does seem increasingly clear.

(It is always good to have diversity of views. My post the other day on the Prime Minister’s FT article seems to have excited another local economics blogger.  Apparently I am a member of the “New Zealand establishment” –  surely a thought that would appal them as much as it appals me –  and some sort of lackey of the National Party (and, worse, the US Republican Party).  I almost fell off my chair a few months ago when someone told me that Simon Bridges had made some positive remarks about this blog, but I doubt any regular readers would ever have taken me as sympathetic to a party that failed to do anything about productivity, failed to do anything about housing, and which seems more interested in pandering to the PRC –  and keeping the funding going –  than in the wellbeing of New Zealanders and the integrity of our society.)