Venezuela has, of course, been much in the news in the last few days.   Fascinating as the politics and geopolitics seems, there is also an economic story – about one of the greatest economic catastrophes of modern times, perhaps of almost any time.  And all the more sad for being entirely manmade.

Go back 100 years and Venezuela didn’t stand out from the countries around it.  Angus Maddison’s collection of historical GDP estimates suggests that in 1913 real GDP per capita in Venezuela was just a bit higher than that in Brazil and just a bit lower than that in Colombia.   The southern cone countries of Latin America –  Chile, Uruguay, and Argentina-  were much more prosperous.

The presence of oil in Venezuela had been known for centuries.  According to one paper I found

The presence of oil was known in Venezuela even before the Discovery of the Americas in 1492; back then, Indians were aware of the existence of hydrocarbons that appear on the surface of their lands. They used them for medicinal and illumination purposes. Also, they collected oil from small creeks near seepages by impregnating blankets and then wringing them out. They also found asphalt, and they used it for caulking their canoes and impregnating the sails of their boats.

In 1499 Spanish conquerors were impressed with the natural occurrences of hydrocarbons in Venezuela. They learned from Indians to use them for medicinal purposes. They also used it for caulking their ships, illumination and lubricating their weapons.

But the modern history of the Venezuelan oil industry appears to date to the granting of a concession in 1913 to Shell, and after 1919 oil exports became a major element in the economy.     And here is a picture, using Maddison’s data showing GDP per capita for the period 1900 to 1960 for Venezuela and for New Zealand, the United States, and Uruguay (as a representative Latin American country, that happens to fascinate me) and Australia (another resource-rich country).

You can see how relatively poor Venezuela was early on, and then the really rapid growth in the 1920s –  catching Uruguay – and in the 1940s.    By the end of World War Two, on this measure real GDP per capita in Venezuela was matching that in Australia and New Zealand.  Another decade on and it was heading towards matching the United States.  It was –  according to a fascinating article in Foreign Affairs – about the time democracy and economic liberalisation came to Venezuela (so the authors claim, a very rare example of a resoure-rich autocracy, in which the state owns the resources, making a transition to democracy).

The period from the early 1950s onwards wasn’t particularly good for New Zealand.  None of the traditional advanced countries has done worse than us over that full period.  But consider Venezuela.

This chart is from the Conference Board’s Total Economy Database, which only goes back to 1950, for the same group of countries.  The earlier chart was expressed in 1990 prices (and relative prices), while this chart uses 2017 international dollars.  Levels comparisons at any point in time are affected by which set of prices is used to convert data from national currency measures.   The period around 1957 still shows up as being Venezuela’s best relative performance, but on this set of relative prices Venezuela then was even more prosperous than the United States.  The key point is that in the late 1950s, Venezuela was right up there, in or around the very top tier of countries on a GDP per capita basis.

But whereas since 1957 even New Zealand’s real GDP per capita has more than doubled (and Australia and the US have done better again), in Venezuela there were only a couple of years when GDP per capita even matched 1957 levels.  At the most recent peaks a decade or so ago, the average Venezuelan was barely richer than their parents/grandparents had been 50 years earlier.   And all that was before things began to fall apart almost completely over the last decade.  No one can have much confidence in the most recent estimates, but if today’s Venezuela isn’t Somalia, it is no Uruguay either.

If one knew nothing more someone might suggest that perhaps Venezuela had had limited natural resources that had now been depleted and its former prosperity was never sustainable.   In fact, Venezuela today has more proven oil reserves than Saudi Arabia and substantial natural gas reserves as well.   This is a manmade catastrophe.   The optimistic take, of course, would be that when the manmade destruction ends, Venezuela can have a bright economic future ahead of it.  Perhaps –  and no doubt the decline of the last decade could be relatively easily reversed – but the allure of those state-controlled oil and gas resources will still be there, and the risks and temptations that took Venezuela down the self-destructive path of the last 50 years.

On a final note, here is the chart showing population growth in each of the five countries. 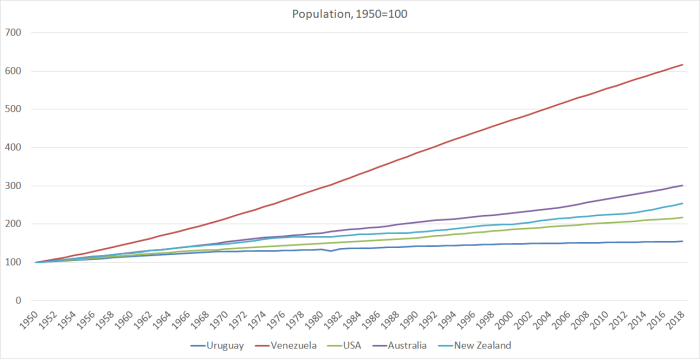 From 1950 to about 1990, Australia’s population roughly doubled, but Venezuela’s population quadrupled.    Rapid population growth certainly isn’t a major element in the story of Venezuela’s relative economic decline, but when your economy rests almost wholly on fixed natural resources, exceeedingly rapid population growth tends to constrain the rate of growth in income per head (in ways not paralleled in economies –  such as most of western Europe –  little reliant on natural resources).   Things get rapidly worse when the population keeps on growing fairly rapidly, even as the production and sale of the natural resource goes sideways or backwards.   Despite all those reserves, Venezuela produces less oil now than it did in 1980, despite supporting more than twice as many people (those who haven’t fled across the borders to other Latin American countries).