Flicking around the web yesterday afternoon I noticed this tweet from Matt Ridley (more formally the 5th Viscount Ridley), the British journalist, businessman and author of various smart books including The Rational Optimist: How Prosperity Evolves.  (Ridley was also formerly  –  from 2004 to 2007 when it hit the rocks –  chairman of Northern Rock.)

"Since the euro was formed in 1999, the German and French economies have grown by 32pc, the Italian economy by 9pc – and the poor old UK, self-excluded from the enormous benefits of the euro, has grown by 44pc. Funny, that." https://t.co/ug23XWmnJP

Ridley is reportedly strongly pro-Brexit.  In my book, that is to his credit (had I been British, I’d almost certainly have voted Leave too.  Then again, the next recession is likely to shake the euro and the EU itself to its very foundations anyway).

But it was the quote from the paywalled Telegraph article that caught my eye.  Those look like pretty impressive numbers, at least for the first 10 seconds until one realises that they are almost certainly total GDP comparisons and British population growth had been faster than that of most of the other countries of Europe.  And, of course, polling data suggests that was one of the factors that led to the Leave vote in the first place –  in and of itself, higher population growth is hardly a mark of Britain’s economic success, let alone a clear welfare gain for the British.

But it left me wondering how the UK had done on other, more relevant, economic comparisons. For example, growth in real GDP per capita and growth in real GDP per hour worked.   The euro was launched on 1 January 1999, so here are a couple of comparisons (using annual OECD data) for growth from 1998 to 2017.  The comparators are  the 10 older western European countries that are in the euro (excluding Ireland whose GDP numbers are messed up by the tax system, and don’t –  to a substantial extent –  reflect gains to the Irish, and Luxembourg) plus Denmark, which isn’t in the euro but whose currency has been firmly pegged to the euro since its creation.  I deliberately didn’t include the former eastern-bloc countries, partly because they joined the euro at various different times over the last 20 years and because something else more important –  post-communist convergence –  is going on there.) 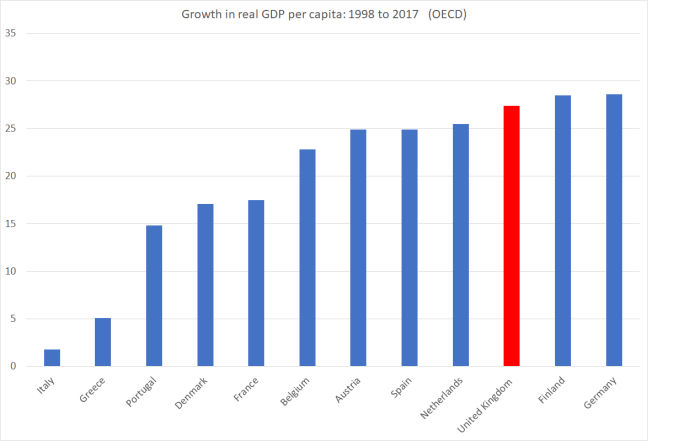 and then real GDP per hour worked.

It isn’t an unimpressive performance over that period as a whole, especially considering (a) all the hoopla at the time the euro was created, including from some trade economists, about the new economic possibilities, and (b) the UK productivity performance since the period encompassing the 2008/09 recession has been really poor (growth in real GDP per hour worked of only 2 per cent in total).   And, I guess, it is now more than two years since the referendum, and the real naysayers would have predicted a further worsening in UK productivty growth since then.

Of course, on the other hand, it is fair to point out that the UK is in the bottom half of these countries for its level of productivity.    On the OECD estimates, in 2017 only Italy, Spain, Portugal and Greece had lower average labour productivity than the UK.   But over the 18 years in the chart those laggard countries underperformed, while the UK did actually manage some convergence.

I don’t think these numbers themselves shed any real light on how the UK will do, in economic terms, relative to the rest of western Europe over the next decade or two (whether or not there is the brief, but perhaps initially quite costly, disruption associated with a “no deal”).  And it is interesting just how widely performance has diverged even among countries in both the commmon currency and the single market.   People make choices about nationhood, and how they want their country run, for a whole variety of reasons, and in most cases a few percentage points of GDP either way doesn’t weigh that heavily –  as I’ve pointed out previously, many post-colonial countries (notably in Africa, but including Ireland) underperformed economically after independence, but probably few really regretted the choice of becoming independent.   Brexit won’t change the twi n facts that the UK is a moderately prosperous country, nor the fact that –  inside or outside the EU –  it has productivity challenges, if it wishes ever again to be in the very front rank of economic performance.

I attended a lecture a couple of weeks ago by the historian and “public intellectual” Niall Ferguson.  He noted that he had supported Remain, for what seemed to be not entirely serious reasons (he is/was friends with David Cameron and George Osborne and thought they were doing a good job, and was himself going through a messy divorce and thought breakups were very hard).  But he had become frustrated by what he described as “the bleating, whining, grumbling of the Remainers” and suggested that he now supported Brexit for two reasons.  The first was that, in his view, the EU could only survive if it became more like a federal state (good luck with that) and the UK could never have been a part of such an entity.  And the second was a hope that Brexit would help the UK confront the fact –  captured in the data above –  that its economic challenges are there whether or not it is in the EU.

I was reading last night an 1882 lecture by French philosopher and historian Ernest Renan, titled “What is a nation?”.   It seemed relevant at present, emphasising as he does that nationhood isn’t about race or language, but about two things

One is the past, the other is the present. One is the possession in common of a rich legacy of memories; the other is present consent, the desire to live together, the desire to continue to invest in the heritage that we have jointly received. Messieurs, man does not improvise. The nation, like the individual, is the outcome of a long past of efforts, sacrifices, and devotions. Of all cults, that of the ancestors is the most legitimate: our ancestors have made us what we are.

A nation is therefore a great solidarity constituted by the feeling of sacrifices made and those that one is still disposed to make.

Nations are not eternal. They have a beginning and they will have an end. …..At the present moment, the existence of nations is a good and even necessary thing. Their existence is the guarantee of liberty, a liberty that would be lost if the world had only one law and one master. By their diverse and often opposed faculties, nations serve the common work of civilization. Each carries a note in this great concert of humanity, the highest ideal reality to which we are capable of attaining.

That makes sense to me.  As does, through all its challenges and mismanagement, Brexit.