So poor have the economic outcomes been in New Zealand for decades –  that slippage from number one or two, to an also-ran lost well down the rankings –  that one could probably mount a reasonable case for asking all those who’ve been MPs –  or ministers at least –  for a refund on the salaries they’ve been paid.  The honourable ones among them should really hang their heads in shame.

But setting aside that perhaps unreasonable hankering, what to make of the latest angst over salaries for our members of Parliament?

First, what has become of the process doesn’t reflect well on either the previous government or the current government.  Both government seem to have panicked in the face of numbers that might have made awkward headlines (but typically involve small changes, the overall effect of which –  including any anomalies –  are likely to wash out over a period of several years), and rushed for crude interventions (freezes, legislation under urgency).  Take the current government as illustrative, they knew the previous government had passed legislation tying increases in MPs pay to public sector pay, and they knew on coming into office that public sector pay was going to be one of the pressure points they would face.   So why, if they weren’t willing to live with the current formula, didn’t they put in place a review (yes, another) as soon as they took office, 10 months ago.  Had they done so, any proposed changes could have extensively consulted on, perhaps even legislated by now.

Second, there is no way to put the setting of MPs salaries at a total remove from the political process.  The enabling legislation has to be passed by Parliament itself, and what is passed by Parliament can be amended by Parliament, even retrospectively.   But we should be looking to develop and maintain systems, and conventions, by which the main parties (a) agree on the rules, and (b) agree to live with the results.  It shouldn’t be that hard –  Parliament doesn’t remove judges who rule against them, and mostly doesn’t even legislate to overturn specific decisions the political process doesn’t like.   All sorts of things embarrass MPs and ministers, but when our system works well, it is just something they have to live with.  I guess it must be tempting to play politics with MPs pay, but it isn’t in the interests of our system of government in the longer run to do so.  It also isn’t in the interests of the systems to have MPs or ministers choosing not to take increases.  Nothing stops them donating to charity, but let their good deeds be done in secret, not as political plays.

There is an article in today’s Dominion-Post by Stacey Kirk taking a cursory look at how the pay of our MPs compares with that in the other Anglo countries (all of whom have considerably higher average per capita GDP than New Zealand does).

The superficial comparisons tend to suggest that our MPs do rather well.  But those comparisons don’t mean much for several reasons:

There is no unalterably right or wrong answer to how much we should pay MPs (absolutely or relative to prevailing incomes in the economy).  Presumably no one favours the old UK (pre 20th century) system in which MPs were not paid at all.  The presumption was that MPs would have another income, which –  of necessity –  meant that the only people who could become MPs were those who did.   If it didn’t necessarily lead to much actual corruption in that historical context, it would certainly open the way for corruption if adopted today.  And I don’t suppose anyone much would support a system in which MPs were all paid $1 million a year: it might attract some really able people, but you’d also be pretty sure that most people competing for the role would be in it for the money.     Putting my cards on the table, I’m sure I wouldn’t want to pay MPs and experienced teachers the same, no matter how good the teacher (a principal of a decent-sized school might be another matter).

It pays to stand back and think about what we should expect from MPs.  There are only 120 of them ( almost a quarter of whom currently serve in the executive), with primary responsibility for scrutinising and holding to account the vast establishment that is the New Zealand government (myriad public agencies and departments, endless regulations and related instruments, and lots of new proposed legislation).  They aren’t the only bulwarks to be sure, but they are the ones with the formal powers and responsibilities –  the ability to summon public servants before select committtees, to demand answers from ministers in Parliament, to insist on changes in legislation, even on occasion to disallow regulatory instruments.  Details matter, context matters, principles matter.   The responsibilities range very broadly (not to mention the hours, for a job decently done).  These aren’t, or shouldn’t be, roles for some amiable person fresh off the street.  And, even in a small country, the public sector is formidably well-staffed, and well-resourced, relative to MPs.

Take, for example, our largest government department, MBIE.  I went to their annual report and found the table of salaries. 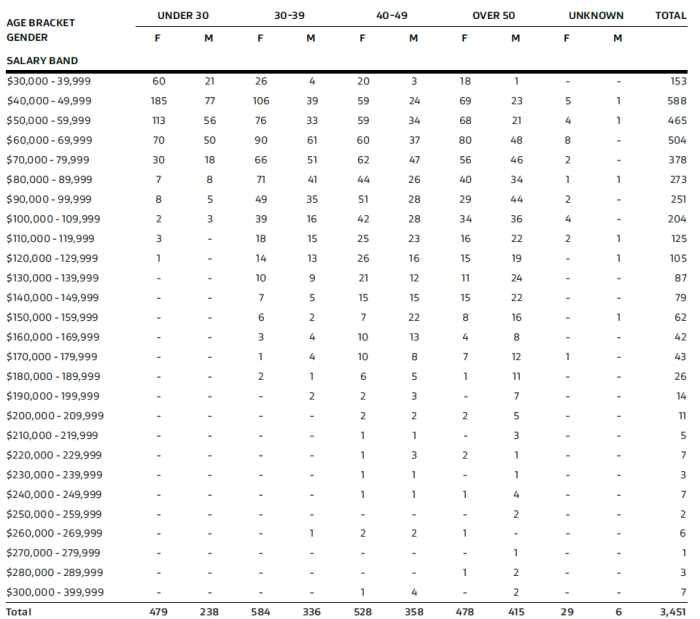 Perhaps you could treat that very top-tier (chief executive and deputy CEs) as the equivalent of Cabinet ministers.  But this one agency also has 45 people earning between $200000 and $300000 per annum.  These will probably mostly be third-tier managers.    Some of you might be inclined to object that these people are themselves overpaid, but I rather doubt it for what we should be expecting from the sort of people who should fill these sorts of roles.    Of course, they are well above average salaries –  we expect much more than average sorts of skills from people filling them.

And these are sort of people whose work we expect MPs to challenge/scrutinise etc (without any of the sort of staff resources these public sector senior managers have at their disposal).

So I don’t have a sense at all that our MPs are overpaid, and wouldn’t have begrudged them a pay rise this year, or any year (in which private wages were rising).    There are perhaps anomalies in the sense that a new 25 year old MP gets the same as an immensely-experienced former Cabinet minister, but there is no easy way round that feature.  And we should steer well clear of the absurd suggestion from the far-left leader of the Greens, who proposed that MPs should get only the same dollar increase as in the average wage –  thus compressing the relative margins between MPs and the rest every future year for ever (well, unless we have a burst of deflation).

I’m not altogether persuaded by the story that able people won’t go into politics because the pay is too low.  No doubt it is so for some. For others, it will be the hours, the separation from family, the public spotlight or whatever. But we should be careful not to increase the risks of such a system, in some self-reinforcing spiral, in which we complain of dud MPs, and then set a reward structure which only increases the probability of disproportionately getting such people in future.  Ours is a thin democracy, with few effective protections against executive over-reach and the like.  We should be looking for very able people to fill select committee positions –  not just as a passage towards promotion, but as a vital role in and of itself.  I’ve argued previously we should provide more resources to members and select committees –  the public goods of good government need to be properly funded, not skimped on –  but while we consistently refuse to do that the calibre of people serving as MPs is all the more important.

If pushed on the New Zealand situation, the person I suspect could be overpaid in our system is the Prime Minister.  It is a big job to be sure, but it really isn’t one people pursue for the money.  No one we would want to be Prime Minister is likely to look, before entering Parliament, at the PM’s salary to decide if they can support a family on it.  As Stacey Kirk’s article points out, on the (crude) international comparisons we appear to pay our Prime Minister quite generously

Data released by international consultancy group IG in May showed Ardern was the fifth highest paid leader in a comparison of 32 members of the Organisation for Economic Cooperation and Development (OECD).

In a study of the pay gap between world leaders and average citizens, Ardern ranked third, earning 8.63 times the average New Zealand wage.

Post-politics opportunities are probably better for many of the heads of government in these other countries –  Bill Clinton or Barack Obama make their money from being President once out of office. Or Gerhard Schroder or Tony Blair.   That isn’t a model we could, or should want to, emulate. I’d rather pay the Prime Minister a decent salary, and expect a considerable degree of self-discipline and restraint once out of office.

As a bonus, perhaps they could take the steps need to reverse the decades of economic underperformance, that have depressed the earnings of most New Zealanders (and led so many to leave altogether).

PS.   In digging around before writing this post, I stumbled on some data on the inflation-adjusted salaries of US Senators and members of the House of Representatives 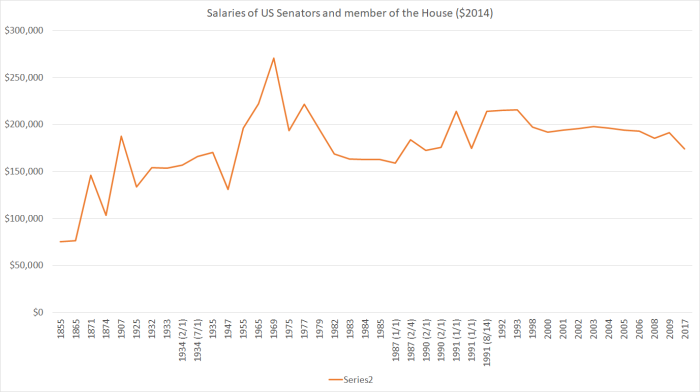 The dates aren’t evenly spaced, but remarkably there has been no growth in real salaries since the 1950s (and no growth in nominal salaries since 2009).  Real per capita GDP in the US today is about three times what it was in the mid 1950s.   That, at least, seems like a benchmark of badness, and something to avoid –  so bad is the US system, the members get no accommodation allowances, and so not a few sleep in their offices while in Washington, and look to opportunities to cash out in new roles in K Street.