There was a British visitor in town yesterday, apparently hosted by the New Zealand Initiative (I might write about his public lecture tomorrow or Monday).  I got the impression he was probably a Blairite – very keen on free trade, free investment flows, and open borders for people too, but also keen on lots of government intervention to deal with what he saw as domestic problems.

The visitor seemed to be a fan of New Zealand (or perhaps particularly of the 4th Labour government –  in his 20s, he’d worked for Mike Moore at the WTO).  We were, he claimed, in some respect the “birthplace of globalisation” –  which would have been news to anyone involved in policymaking at the time.   He told his audience this curious story, bearing some – but not that much – resemblance to reality about how dreadful New Zealand had been in the early 1980s (and we can all agree that assembling TV sets here was insane) and how New Zealand had “flourished” since then.  I don’t suppose he had ever actually had a look at any data, and seen for example that foreign trade (share of GDP) is barely higher than it was back then, that the income and productivity gaps to the rest of the world are larger now than they were then, or contemplated the affordability of a first home.

But one thing you could do in the bad old days – whether Kirk/Rowling or Muldoon –  was go to a shop and expect that your groceries – for example –  would be packed in a bag provided by the shop.  Not just groceries: bookshops, clothes shops, knick-knack shops or whatever.  Those who didn’t want a bag –  perhaps for a single item –  didn’t need to take one.     Perhaps back then the bags were more often paper bags, but we now know that paper bags are not only typically more expensive but more energy-intensive than a simple plastic shopping bag.  And often harder to re-use  (things often don’t store so well in paper bags, and they aren’t very tolerant of liquids).

But, assuming the Prime Minister and her Green Party associates have their way, that simple freedom is soon for the chop.   I’ve just come back from the supermarket, having done perhaps two-thirds of the weekly shopping for a family of five.    There were 15 bags of groceries, and 16 bags with various different lots of fresh produce.  Presumably these all count as the dreaded “single-use” plastic bags, although many will be re-used.   And, of course, when I got all the groceries home and arrayed them on the bench in the kitchen, I noticed that all the “single-use” plastic bags (actually often re-usable) would squash down to a rather smaller pile than the plastic in a single three litre bottle of milk (there were several of them).  I have no use at all for empty plastic milk bottles, or containers of shampoo, or dishwasher powder.  And yet our government proposes to outlaw the simple lightweight useful little plastic bags.

But perhaps the most important thing about the plastic bags I brought home is that when I’ve finished with them (used or re-used) they will all go in the rubbish.  None will go drifting down the street, blowing across the beach or whatever. Like most responsible people, I put my rubbish in the bin, whether at home or out.   Perhaps the Prime Minister doesn’t?  Perhaps James Shaw and Marama Davidson don’t.  Perhaps they can’t trust themselves to bring up their kids not to litter?  But what right do you think you have Prime Minister – in an ostensibly free society – to tell shops what sorts of bags they can and can’t provide (give or charge for) customers?

I can quite see the case for litter laws.   And this is, from the listening to the rhetoric,  a littering issue –  at least when it isn’t just about virtue-signalling, feeling-good and virtuous, and enjoying taking away some freedom to show we hold power.

So why not tighten the litter laws?  Fines tend to lag well behind growth in incomes and prices.  Surely it is an obvious response, that deals with the free-rider issues and associated externalities (unsightliness and visual pollution).  I’m loathe to suggest more worthiness for schools to teach, but perhaps if Labour and Greens voting parents really can’t be trusted to raise their kids not to litter, schools could add that to the daily indoctrination?

There is a consultation document available on the Ministry for the Environment website.  I haven’t read it yet, so I’m not sure quite what the limits to this authoritarianism are: is the Prime Minister also proposing to ban (for example) single-use rubbish bags, or selling salads or rolls or supermarket cooked chickens in plastic wrap/bags?   But I did electronically search the document on the off-chance that it contained any serious economic analysis, let alone a decent cost-benefit analysis.  There was no sign of either.   Which probably shouldn’t be surprising –  par for the course with, for example, the climate change consultation, let alone the (unconsulted) oil and gas exploration decision. I guess it doesn’t matter.  If it feels good they’ll do it.

It is strange to think that Jacinda Ardern and James Shaw could soon have one hankering for some simple freedoms of the Kirk/Muldoon years.

As a mark of how sold-out the public service apparently now is to the wishes and feelings of the government of the day, there is also on the MfE website a cutesy little questionnaire –  of the sort I’ve seen a few times now on various agency websites. Here was MfE’s 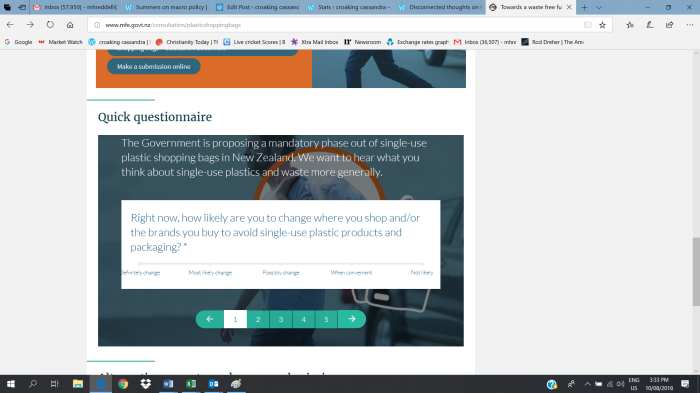 Totally loaded one way, and no room at all for my answer: I’d change shops at present to avoid those which don’t provide packaging.  The local supermarket tried out a plastic-bag free Friday last year.  It didn’t last that long, but while it did I actively avoided the place on Fridays.

And all because the PM and her followers can’t pick up their rubbish, and won’t punish more heavily the transgressors who litter.  Or because they simply have no respect for the simple freedoms of buyers and sellers, whose choices hurt no one else.

21 thoughts on “I’ve just been shopping”