It is census day.  I’d probably be filling in my census forms now, except that they haven’t yet arrived.  We wanted paper forms, and I rang to request them within minutes of the initial SNZ letter arriving, with the access codes.  That was 10 days ago now.  So I’m less than impressed.  Doubly so as one of my kids is off at a school camp, and whereas I’d planned to fill out most of her form for her and send it along with her, since the forms haven’t arrived some teacher will presumably be overseeing her completion of the form, including a bunch of quite sensitive information that is simply none of the teacher’s business.

There is an article in the Dominion-Post this morning (“An intrusive, insulting exercise”)  from a journalist attacking the very existence of the census.  I’m torn.  I’m a keen user of some census data.  But I can’t help wondering what business it is of the state to coerce –  under direct threat of prosecution –  much of this information out of people.  As the journalist notes, threats to government data security have become more real.  And I also wonder whether Statistics New Zealand is not increasingly an instrument of a socio-political agenda (note the several pages of defensiveness about the absence of “gender identity” questions – this time).    Glancing through the questions, I’m also struck by the imprecision of several of them (eg under “Which country were you born in?” the third option is “England”, which is barely more of a country than, say, Canterbury or Otago are –  the latter two had their own parliaments rather more recently (1876) than England did (1707?).

The ethnicity question has been in the media in the last few days, with some  people bothered that “Pakeha” isn’t an option.  I guess they have a point.  But what bothered me was something else. Here is the question. 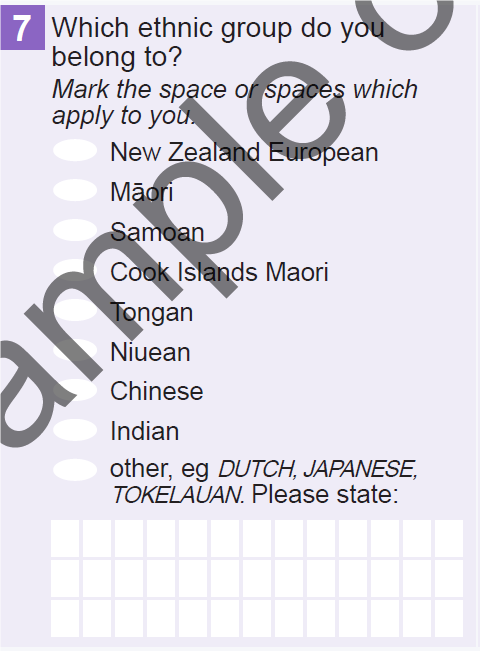 How many Niueans are there in the entire world?   Apparently about 25000.  At the last census there were more than 200000 people in New Zealand born in “England” –  plus others who probably identify as English.   And yet SNZ don’t even list it as one their top 8 options.  It would be interesting to understand why.  I’d probably normally tick the form as “NZ European”, but I think that (when the forms finally arrive) this time I might write down English, Scottish, Northern Irish, and perhaps British as well.  Since SNZ tell us ethnicity is, on their reckoning, self-perceived, the answers won’t (can’t really?) be wrong –  and those places are where my ancestors come from.

There are questions that leave one wondering about the reliability of the results of the census.  Here is a language question

On a form in English, they feel the need to remind us to remember to mark English if we can have a conversation in English?.  Quite how thick do they think respondents are that they need to talk down to us thus?   (And why is it any business of the government whether someone can hold a conversation in, say, Pukapukan or Polish? –  English, Maori, and Sign Language might, arguably, be a different matter.)

Then there is the religion question. 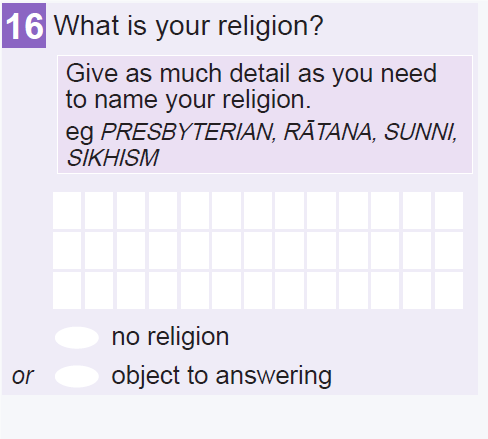 I consistently refuse to answer this question, not because I’m ashamed of my faith – Christian – but because it is the one question I’m lawfully allowed to refuse to answer.   The government and SNZ attempt to market the census on the basis of all the important public policy/spending choices it will inform, but it isn’t clear what decisions they think they will be making on the basis of individual’s declared religion (or lack of it).   And then there is the picky point: few Presbyterians will think of “Presbyterian” as a religion, but as a denomination within Christianity.

And then there is the question that probably bothers me most.

Quite what business is any of this to the government?  Frankly, if I had difficulty washing or dressing, I’d rather take the risk of being prosecuted (or perhaps even lie) than face the humiliation/embarrassment (as many will regard it) of writing that down on some government official’s form.

There are the questions that look like some activist’s request

What marks out cigarettes, in the minds of the bureaucrats who put this together, from pipes or cigars?  What business is it of the government’s.    And if cigarettes, what about alcohol, drugs, or other things people might think of as social vices –  “have you ever requested a single-use plastic bag?” for example.  Then again, perhaps I shouldn’t encourage them.

And, to the very end, the worthy social agenda continues.  The form ends –  the sample on-line firm, not yet having got my forms –  thus.

Actually, if there are blank unused forms, I’d prefer to rip them up, drop in the rubbish bin and see them off to the landfill.  But quite what I do with my rubbish shouldn’t really be any concern of Statistics New Zealand.

For much of the sort of information in the questions I’ve highlighted, it is hard to see a legitimate public policy interest in the information (coerced as you’ll recall) and also hard not to think that to the extent that there is interest in the issues in some quarters, reasonable steers could not be obtained much more cheaply, and non-coercively, through the use of well-designed voluntary surveys, undertaken at the expense of those interested in the data, and without the privacy concerns regarding the provision of so much joined-up data in one place to public servants.