Almost 10 years ago I stumbled on this chart in the background papers to Australia’s tax system review. 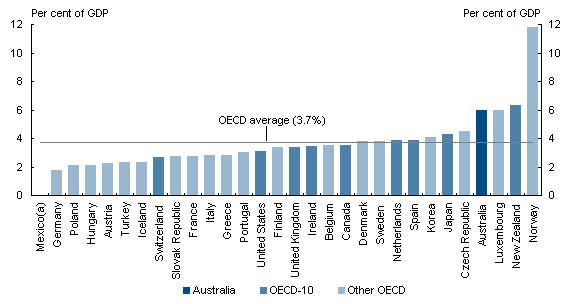 I was intrigued, and somewhat troubled by it.   New Zealand collected company tax revenue that, as a share of GDP was the second highest of all OECD countries.   And yet New Zealand:

And, of course, our overall productivity performance lagged well behind.

Partly prompted by the chart, and partly by a move to Treasury at about the same time, I got more interested in the taxation of capital income.   After all, when you tax something heavily you tend to get less of it, and most everyone thought that higher rates of business investment would be a part of any successful lift in our economic performance.  That interest culminated in an enthusiasm for seriously considering a Nordic tax system, in which capital income is deliberately taxed at a lower rate than labour income.  It goes against the prevailing New Zealand orthodoxy –  broad-base, low rate (BBLR) –  but even the 2025 Taskforce got interested in the option.

Flicking through the background document for our own new Tax Working Group the other day I came across this chart (which I haven’t seen get any media attention).

It is a bit harder to read, but just focus for now on the blue bars.   On this OECD data New Zealand now has company tax revenues that are the highest percentage of GDP of any OECD country.   A footnote suggests that if one nets out the tax the government pays to itself (on businesses it owns), New Zealand drops to only fourth highest but (a) the top 5 blue bars are pretty similar anyway, and (b) it isn’t clear who they have dropped out (if it is just NZSF tax that is one thing, but most government-owned businesses would still exist, and pay tax, if in private ownership).

So for all the talk about base erosion and profit-shifting, and talk of possible new taxes on the sales (not profits) of internet companies, we continue to collect a remarkably large amount of company tax (per cent of GDP).  Indeed, given that our total tax to GDP ratio is in the middle of the OECD pack, we also have one of the very largest shares of total tax revenue accounted for by company taxes.

The Tax Working Group appears to think this is a good thing, observing that it

There is some discussion of the trend in other countries towards lowering company tax rates, but nothing I could see on the economics of taxing business/capital income.  It is as if the goose is simply there to be plucked.

There are, of course, some caveats.   Our (now uncommon) dividend imputation system means that for domestic firms owned by New Zealanders, profits are taxed only once.  By contrast, in most countries dividends are taxed again, additional to the tax paid at the company level.    But, of course, in most of those countries, dividend payout ratios are much lower than those in New Zealand, and tax deferred is (in present value terms) tax materially reduced.

And, perhaps more importantly, the imputation system doesn’t apply to foreign investment here at all.   Foreign investment would probably be a significant element in any step-change in our overall economic performance.  And our company tax rates really matters when firms are thinking about whether or not to invest here at all.  And our company tax rates are high, our company tax take is high –  and our rates of business investment are low.  Tax isn’t likely to be the only factor, or probably even the most important –  see my other discussions about real interest and exchange rates – but it might be worth the TWG thinking harder as to whether there is not some connection.

Otherwise, as in so many other areas, we seem set to carry on with the same old approaches and policies and yet vaguely hope that the results will eventually be different.