The Minister of Finance yesterday gave his major public speech since taking office, explicitly selling it as an outline of the government’s economic strategy.     Sadly, there wasn’t very much there, and much of what was there focused –  as his speech title did –  on sharing and redistributing, with very little on reversing the decades of dismal economic underperformance.   Simply cutting the pie differently is no long-term solution to the sort of failure that has seen almost a million New Zealanders (net) leave New Zealand for a better life, for them and their families, abroad.

During the election campaign I was somewhat critical of Labour for simply accepting the National government’s narrative that the economy was basically doing fine.  But at least then I could sort of understand why they might do it –  something about not scaring the voters in the centre ground and not coming across as alarmist when they didn’t have much of a solution.    It is bit more surprising, and much more disappointing, to see that narrative carried over into office.

While the fundamentals of our economy were, and are, strong, the purpose of it had become lost.

Again, perhaps after some bad business confidence numbers he doesn’t want to scare the horses.  But (a) you don’t produce better outcomes without actually facing what has gone wrong in the past, and (b) it is starting to seem as though the Minister of Finance actually believes the story on some level.

Grant Robertson was born in 1971.  Even by then, our economy had been in relative decline for a couple of decades –  and all the contemporary experts knew it.  But if we were no longer among the most productive and wealthiest of the then advanced economies, at least we were still in the middle of the pack.  Since then, we’ve just lost further ground –  the relative decline was particularly bad in the 1970s, but there has never been a sustained period since then when we’ve looked like reversing any of the relative decline.  Not under National governments, and not under Labour government’s either.    When Grant Robertson went off to university, eastern and central Europe was still Communist-run, with highly inefficient poorly-performing economies.    These days, the better performing of those countries –  Slovakia, Slovenia, the Czech Republic – are closing in on New Zealand levels of productivity/income, and places like Hungary and Poland aren’t that further behind.   Turkey is on the brink of going past us.   They’ve done quite well, but still have a long way to go to catch up with the West European leaders.  We’ve just done really rather badly; mediocre at a (generous) best.

Economies that are performing well  are typically ones in which the tradables sector of the economy is growing.   Local firms are finding more products and services which they can sell to, or compete with, the rest of world.   But we’ve had no growth in real per capita tradables sector GDP since around 2000.  Exports are a share of GDP are, as I illustrated the other day, now at the lowest level since 1976.

Over the last quarter century – even after the economic reforms –  our productivity growth has been among the lowest in the OECD (and we started from a bad position).  Most starkly –  and this a point that Robertson does mention –  we’ve had no productivity growth at all for the last five year.

And then, of course, there is the disastrously dysfunctional housing/land market: a country with so much land nonetheless has some of highest house price to income ratios anywhere in the advanced world.

Frankly, the “fundamentals of our economy” are pretty poor, especially if what we care about is the ability to support high incomes (fairly shared) for all of our people.  Yes, there are some things we can chalk up on the other side:  we’ve largely avoided a domestic financial crisis, our government accounts are sound, our people are pretty highly skilled (we’ll come back to that one), and our unemployment rate isn’t too bad (even if it is still above a NAIRU).   But mostly those are ‘inputs”: the “outputs” and “outcomes” don’t look very attractive at all.  And that makes it all the harder to deal effectively with some of the pressing social (and environmental) issues.

You might think an incoming government was well-positioned to point this stuff out.  But I guess there is no point in doing so if you haven’t got a strategy that is likely to be (a) materially different from what went before, and thus (b) likely to produce material different outcomes.

Instead, they seem to want to play down the dismal economic data and follow The Treasury down the not-particularly-well-grounded path of the Living Standards Framework (which I wrote about a couple of weeks ago)

I have asked the Treasury to further develop and accelerate the world-leading work they have been doing on the Living Standards Framework.  This focuses on measuring our success in developing four capitals – financial, physical, human and social. These give a rounded measure of success and of how government policy is improving our well-being.

This is a far better framework for judging our success.

As I’ve suggested previously, it looks more like a way of avoiding confronting our really bad long-term economic performance and the very large trend outflow of our own people.

The Minister of Finance claims they will keep a focus on productivity.

Low productivity has been a cloud over the New Zealand economy for decades and previous governments have failed to tackle this issue – this government will not.

Which sounds okay, perhaps even momentarily encouraging.  But how are they going to do this?  The Minister identifies only two areas.   The first is skills.

Lifting the skills of our people is critical to solving the productivity challenge.

In fact, there is not the slightest evidence for this proposition, which would lead the reader to suppose that skill levels in New Zealand lagged behind those in other, more economically successful, OECD countries.   No doubt we can do better (and there are specific pockets of underperformance), and there have been some disconcerting developments in the PISA results in recent years.  But the OECD produced data only last year suggesting that New Zealand workers were among the two or three most highly-skilled in the OECD.      They used three measures and this was one of them 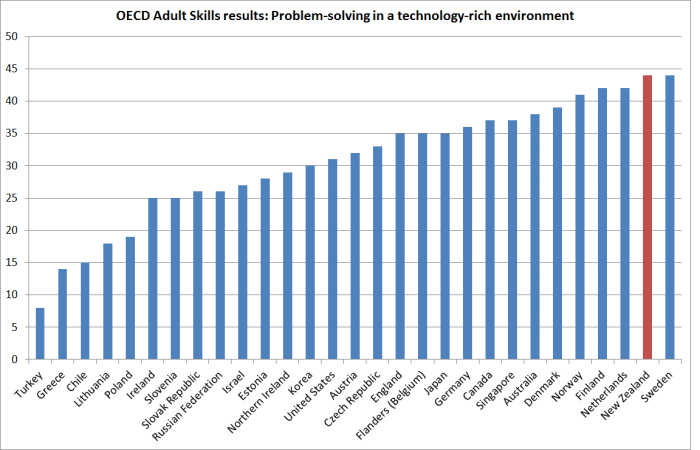 As I summed it up at the time

Looking across the three measures, by my reckoning only Finland, Japan, and perhaps Sweden do better than New Zealand.

Increased subsidies for tertiary education (the policy Robertson then advances) will, no doubt, serve a redistributional function (even if one of questionable merit –  and I say that as a parent with three kids likely to go to university in the next eight years).  But there is little evidence they will do anything to close aggregate productivity gaps –  which, in New Zealand, aren’t about the skills or energies workers bring with them, or even about our legal institutions, but about the profitable business opportunities firms can find here.

And the second strand to Robertson’s response to our productivity failure is R&D.

Also critical for lifting productivity is increased investment in Research, Development and Innovation. The first step in this is the introduction of an R and D Tax Credit.  Beyond that we will move to work smarter, adding value to change the mix of our exports and using and creating new technologies.

I’m not aware of any serious observer, even among supporters of R&D tax credits, who believe that such credits are likely to make a transformative difference.

This is the data from the national accounts (March years) for research and development spending as a share of GDP.

It would be interesting to know quite what was going on in the 1970s, but really ever since then there hasn’t been much change in the share of GDP devoted to R&D (as captured by Statistics New Zealand).  Interestingly, the most recent year saw the highest R&D share in the 45 year history of the series.

Many observers point out that New Zealand is relatively unusual among advanced countries in not having an R&D tax credit.  There are various other countries, including Denmark and Switzerland, but on the extreme far end of the OECD’s chart of a summary indicator of such matters are New Zealand and Germany.

And yet here is the OECD’s data on R&D spending.  For this particular series they don’t have data for New Zealand for every year, but the picture is still clear enough.

The New Zealand R&D spend (as a share of GDP) is well below the OECD total, and Germany’s has been consistently above (as are those in Denmark and Switzerland).   And neither country has R&D tax credits.  In fact, when the OECD totted up all the different sorts of government support for business R&D, the New Zealand government was considerably more generous than Germany.

It suggests, as I’ve argued here for some time, a need to stand back and think about what it might be in the New Zealand economic environment that means so little R&D occurs here.  Firms typically take the risk of investing in R&D when they think the opportunities for profitable businesses are good.     That doesn’t appear to have been the case in New Zealand (in contrast, say, to Germany), and consistent with that overall business investment as a share of GDP in New Zealand has been low by advanced country standards, for decades, even though our population growth rate has been much faster than that in the typical OECD country (more people will typically require more business investment if living standards are to keep pace).   This is not the place for a lengthy discussion of factors that might discourage firms from investing here, but high interest rates (relative to those abroad), an out of line real exchange rate, and being the most remote advanced country on earth (at a time when personal connections, value-chains etc seem to have become more important) might be things to think about.  Not one of them appears in the Minister’s speech.

In other words, we’ll be swapping out population growth and the buying and selling houses to each other as our two main growth drivers for much more sustainable ones. That sounds like a good description of our plan.

But they aren’t changing the medium-term immigration targets at all (and various media report that the Prime Minister isn’t even keen on implementing Labour proposed changes re student and work visas),  and simply buying and selling houses has never, of itself, been a “growth driver”.

There is the beginning of an idea here, but sadly nothing in government policy –  as outlined so far – is likely to represent any sort of fix.  After all, a key thrust of government policy is to build lots more houses, and they plan to just keep on keeping on issuing 45000 residence approvals a year for people to settle in such a remote, unpropitious (from an economic perspective) location.  Perhaps worse still, they seem keen on continuing, and beefing-up, the previous government’s misguided approach of trying to steer migrants to places other than Auckland (which is, on my telling, to put the cart before the horse).

One gets to the end of the speech confident that the government knows how it wants to redistribute more/differently than what went before (much the same could be said of Phil Twyford’s housing speech yesterday), but without any sense of a compelling strategy that is likely to do anything to reverse New Zealand’s long-term economic underperformance, to fix those flawed fundamentals.  I hope they really care about fixing the fundamentals and are just keeping quiet because they don’t have any compelling ideas –  and aren’f finding them in The Treasury’s post-election advice.  I fear that, a bit like their predecessors, it is some mix of putting the problems in the too-hard basket, and of no longer really caring that much.