Skip to content
HomeWho has been getting residence visas?

Someone called Keith Ng (who is apparently quite pro-immigration), has gone to the effort of downloading some of MBIE’s (not at all user-friendly) visa approvals data and formatting it in a reasonably readily usable way.  The resulting spreadsheet is here.   I was particularly interested in the analysis by occupation, and particularly that for those granted residence here.  (He has provided the data for work visas as well, but it conflates all sort of work visa types, short and long term, and isn’t that informative as it stands –  I suspect that 30000+ tour guide visas in the last seven years or so mostly captures a lot of people who are here for very short periods of time.)

In their annual Migration Trends and Outlook publication MBIE do provide a table of the occupations of the principal applicants for skilled migrant category residence visas.  But, unlike most of their tables, there is no time series provided.  In 2015/16 –  the latest publication –  these were the top 10 occupations.

I was a bit curious how many chefs there were in New Zealand in total.  At the last census, there were only 16218.

But Ng’s table enables one to easily look at the main occupations of people being granted residence over the last decade or so.  He presents the data for  each of the years 2006/7 to the present, with only partial data for the incomplete (June) year 2016/17.  Here are the occupations with more than 1000 approvals over the decade.

And this is the most skilled half of the people who are granted residence (others get in on non-skilled bases –  family, refugees, Pacific Access etc).

The list is quite dominated by the first few entries, and those occupations don’t stand out as occupations of exceptional skill, even though MBIE used to like to tell us that our immigration policy was a “critical economic enabler”.    And remember that this is about people getting residence, not about work visas which, notionally at least, are supposed to partly reflect specific temporary areas of skills shortages (and, hence, where one might expect bunching in particular occupations, but where the particular occupation would change over time).

The large numbers of aged care nurses (and there are many more, and aged care workers, in the work visa numbers) stands in striking contrast to the recent pay equity settlement. In that settlement, the government concluded that employees in the sector were so badly paid that a direct government intervention was needed to drive up the wages.  I don’t usually focus much on the arguments about whether immigration lowers wages –  my focus is more on overall economic performance –  and I’m not (at all) a fan of “pay equity” interventions, but it is hard to look at these two things and not conclude that there is a certain incoherence about policy.   Had fewer aged care workers from abroad been granted visas, it seems likely that market wages in that sector would have been rather higher.

Of course, among the occupations on that list are some that seem genuinely quite highly-skilled.  My eye was caught by the number of university lecturers and “developer programmers”.

The number of developer programmers getting residence visas has increased from almost nothing, and at an even faster rate than the (presumably) rather less skilled ICT Customer Support Officers.

On the other hand, rather fewer university lecturers (and secondary school teachers) have been getting residence.

How early childhood teachers qualify at all is a bit beyond me.

And just in case you, charitably, supposed that some of the less skilled occupations were becoming less important over time, here are the food-preparation ones on my list.

And here are the trends in the remaining top five roles 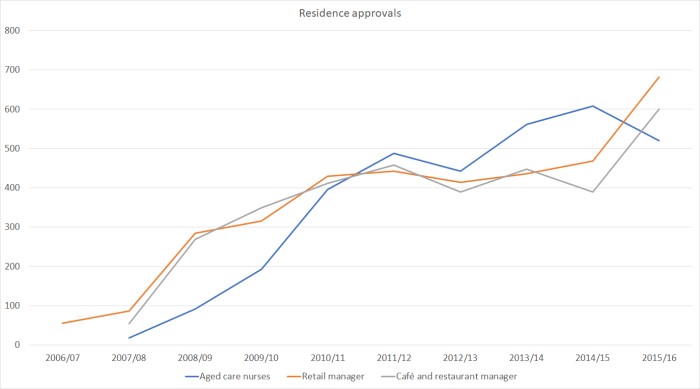 If there is a serious economic strategy behind all this, it is pretty hard to spot.  No wonder the government was casting around for other ideas when they ran into the Monahan brothers and came up with the global impact visas.  But just because something different needed to be done, didn’t make  “just anything” –  especially something with a rather hip or with-it feel to it –  a sensible thing to do.

The only really compelling story that makes much sense of the residence approvals numbers is official (political and bureaucratic) determination to drive up the population.  If that is the goal, I guess one can’t be very picky and we get a bunch of modestly-skilled people coming.  But there isn’t much sign that driving up the population has been a successful economic strategy anywhere –  unless, of course, one counts survival as a precondition, which partly motivates the Israeli policy of open doors to any Jews –  particularly not in places that remain heavily dependent on what they can do with fixed natural resources.    Sometimes rapid population growth can be a complement to economic success –  people will be keen to come and there might be plenty of prosperity to go round.  But New Zealand’s policy –  and Australia’s actually –  continues to put the cart before the horse, as if drawing more people here will somehow conjure up great new higher-productivity opportunities for them and for us.     But there is simply no basis –  and certainly not in New Zealand’s experience –  for such a belief.

21 thoughts on “Who has been getting residence visas?”