Once again, I largely agree with the Governor’s bottom line –  OCR unchanged, and no great sense of urgency about future changes in either direction.   And I have quite a few other things on my plate over the next few days.  So here are just a few scattered thoughts prompted by the OCR statement this morning.

At a fairly trivial level, I was a bit surprised, on two counts, to see this line “Recent changes announced in Budget 2017 should support the outlook for growth.”   First, aren’t the bulk of the Budget announcement changes conditional on the current government being re-elected?   That is hardly in the nature of a sure thing I’d have thought.   And second, the comment could be read as something of an endorsement for the government’s spending plans, which doesn’t really seem appropriate for an independent apolitical Reserve Bank.  Why do I say that?  Because the observation isn’t just that increased government spending will provide a boost to demand in the near-term, but that it will increase the “outlook for growth” –  generally regarded as “a good thing”.  Perhaps I’m being a little picky, but it would be surprising if the sorts of initiatives announced in the Budget do anything to lift potential growth.

I wonder too if the Reserve Bank ever gets uncomfortable with the implications of this line “Monetary policy will remain accommodative for a considerable period”?  On their reckoning, presumably, monetary policy has been “accommodative” for probably eight and half, getting on for nine, years, now.   And they expect it to remain “accommodative” for a considerable period ahead.  In total, on their reckoning, at least a decade.     And yet throughout the whole of that period unemployment has been or is projected to be above the NAIRU.   And inflation (core) has been persistently low.  It isn’t even as if that can be ascribed to a series of positive supply shocks –  in fact, productivity growth (not something the RB has any real influence over) has been shockingly bad in recent years.    So where, specifically, is the evidence of the “accommodation”?  Interest rates are certainly low, but that is potentially a quite different thing.    There is an old line about the evidence of leadership being the existence of people actually following.  Perhaps the evidence of monetary “accommodation” should be some sustained resurgence in inflation and pressure on the economy’s available labour?  We still haven’t seen it.

Does it matter?   Perhaps, it could be argued, it is only words.  What matters is actions.    I think it does matter.  The Reserve Bank has twice started what it saw as sustained tightening cycles, only to have to reverse itself quite quickly.   And even though they are no longer champing at the bit to raise the OCR, the mindset still seems to be on the gap between actual and (their estimate of) neutral interest rates.   That increases the likelihood that they will miss, or downplay, downside risks.     In fairness to the Reserve Bank, I suspect it is a problem shared with many of their peers in other advanced country central banks –  there is plenty of talk of a hankering for “normalisation” in the United States – but most are perhaps more subtle and less dogmatic about their phraseology.   In the RBA latest statement, for example, there is no attempt to comment on the gap between the actual cash rate and (estimates of) the neutral cash rate.

And, finally, the Governor repeats his common line that “Longer-term inflation expectations remain well-anchored at around 2 percent”.   Perhaps that is what economists tell survey-takers  (and in a welcome development the Reserve Bank is just about to add such a question to its own survey of expectations).   In fact, we know very little about what (implicit or explicit) assumptions about medium-term future inflation that firms and households are basing their decisions on.   Perhaps, in most cases, they don’t even need to give it much thought –  most interest rates and most wage contracts reprice at least every year or two, and most selling prices can be reset or reviewed at least that frequently.

But we do have one set of indications about what people putting real money on the line might be thinking.    That is the gap between the yield on conventional government bonds and the yield on inflation-indexed government bonds.  That difference isn’t a pure measure of inflation expectations –  there probably are no such things anywhere – and it can be affected by the relative supply of the various instruments, and changing attitudes towards risk.  Try to sell too many indexed bonds, for example, and the yield on them will rise compared to yields on conventional bonds.  That isn’t a change in inflation expectations.   Indexed bonds are often less liquid than conventional bonds.  But then again, for many purposes an indexed bond is a more natural hedge (and thus a more valuable asset) than a conventional bond.   Some of the issues around indexed bonds were covered, long ago, in a Reserve Bank Bulletin article.

There is also a problem that indexed and conventional bonds rarely have the same maturity dates.   Here is the chart of the differences (the “breakevens”) for New Zealand for the last few years.  I’ve used the Reserve Bank’s benchmark 10 year conventional bond yield (the actual bond they are using moves through time), and the indexed bonds maturing in 2025 and 2030.   Throughout the whole period shown, the 2025 bond was closest to 10 years away, but by the end of the period (now) it has only little over eight years to run, and can start to get thrown around by short-term CPI fluctuations (eg oil price changes).

There was a big rebound in these “breakevens” (or implied inflation expectations) from the lows in the middle of last year.  But it hasn’t really come to much.  Take the average of last observations from those two series, and the 10 year breakeven –  where people are placing actual money –  is 1.15 per cent.   That is a long way from the 2 per cent target midpoint that the Governor has been required to focus monetary policy on throughout his term.  It has now been at least two years since the breakevens were averaging even as high as 1.5 per cent.

As readers who are closer to markets will no doubt be drumming their fingers and telling themselves, it isn’t just a New Zealand issue.   What about the US and Australia?  Well, here is the same chart for the United States (using the constant-maturity series for both indexed and conventional bonds).

There has been quite a fall off in the last few days, but at least until then the picture looked less disquieting that the New Zealand one does.   If the breakevens weren’t averaging around 2 per cent, perhaps you could say that at around 1.8 per cent they weren’t too far away.  For those defending the Fed’s interest rate increases –  I’m not fully convinced of the case myself –  it might have been some comfort.

And here is a similar chart for Australia, using data from the RBA website (for which the data are only available since the start of 2016). 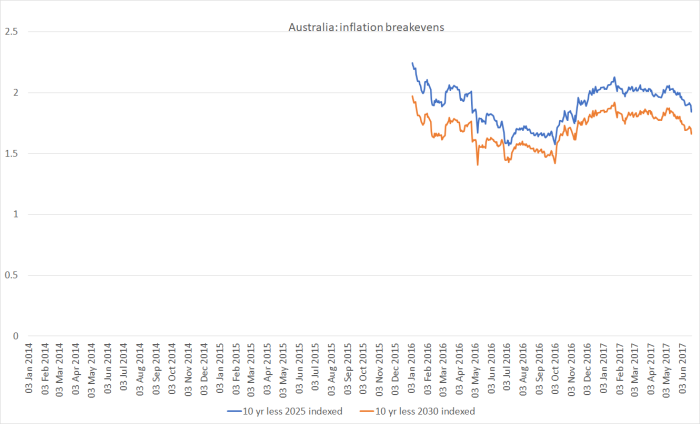 Australia’s inflation target is centred on 2.5 per cent annual inflation.  Averaging these two series, implied inflation expectations for the next 10 years are currently only around 1.75 per cent.  The gap in Australia, between the breakeven inflation rate and the midpoint of the target, is almost as large in Australia as in New Zealand.

Perhaps there are compelling market-based reasons why such breakeven inflation rates should be completely discounted, as currently telling us nothing relevant to monetary policy.  But if so, perhaps the respective central banks could explain the reasons why they think there is no meaningful information, rather than (as it seems) simply ignoring the information.  Curiously, twenty years ago –  when Graeme Wheeler was still head of the Treasury’s Debt Management Office – the Reserve Bank was dead-keen on having inflation-indexed bonds, as one read on inflation expectations.  Treasury themselves were never that keen –  they just thought it would be expensive funding.    But at the moment it looks as though markets are telling us that Graeme Wheeler will finish his term as Governor without any widespread investor confidence that things are well-positioned for inflation to average near 2 per cent over the next 10 years.  On the face of it, that should disquiet the Bank, and those charged with holding them to account.

In conclusion, and in passing, one of my repeated themes has been the persistently large gap between New Zealand real interest rates and those in other advanced countries.  When our OCR is 1.75 per cent and the Australian cash rate is 1.5 per cent, it is easy to gloss over that point.  But bear in mind that the Australian inflation target is 0.5 per cent per annum higher than New Zealand’s, so that even at the short end there is still a material real interest rate gap.   And what about the very long-term indexed bond yields?   Both governments have indexed bonds maturing in 2035.  Ours was at 1.94 per cent earlier this week, and Australia’s was yielding 0.91 per cent.  Those are really big differences –  think how much they cumulate to over almost 20 years –  and not supported at all by productivity growth differentials in New Zealand’s favour.     The US yield on a 20 year indexed bond is similar to Australia’s at 0.8 per cent.   The gap is, amomg other things, one marker as to how overvalued our real exchange rate is.   That has been a constant theme of the Governor’s during his term.  The policy things that might make a difference to that outcome are in the government’s hands rather than the Governor’s.  And sadly, they don’t seem very interested.